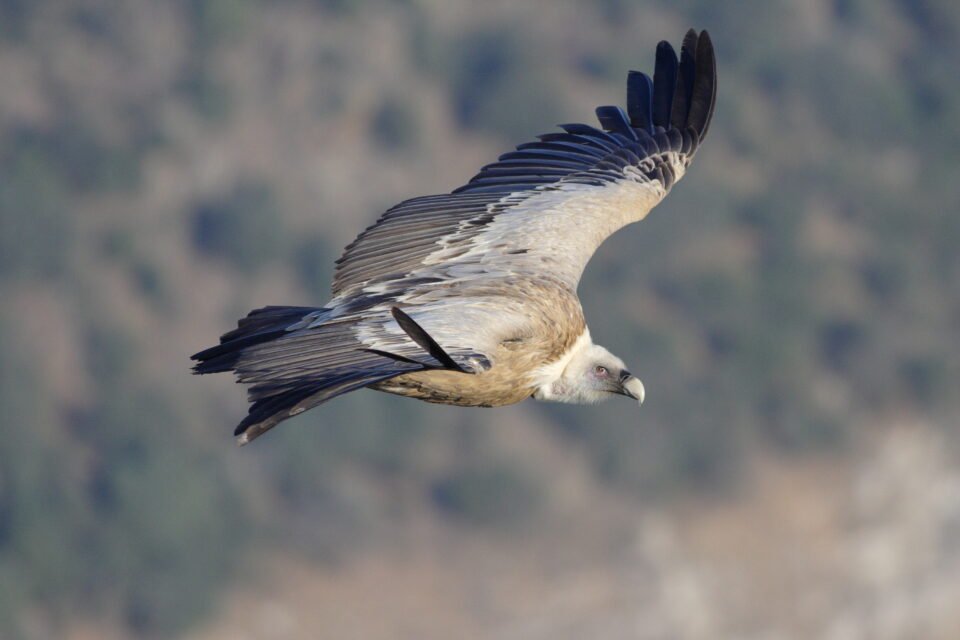 The latest census in December put the number of Griffon vultures at around 20, up from 10 in 2012 (Guy Shorrock)

The continued prevalence of animal poisonings poses a serious threat for both domestic animals and wildlife, including wild and protected birds, according to BirdLife Cyprus.

The use of poisoned baits is an illegal practice that also poses a danger to human life of both the perpetrator and the public, as baits are placed in the open.

Whilst too many pet owners have experienced first-hand the heart-breaking and horrifically painful effect poisoning can have on dogs and cats, this illegal practice can also introduce poison into the food chain and indirectly endanger many species, including birds.

“The deliberate use of toxic substances to lace baits affects a wide spectrum of protected species, especially when placed in the countryside,” project officer, Theodosis Theodorou of Birdlife told the Cyprus Mail.

BirdLife Cyprus works to protect wild birds, their habitats and wider biodiversity in Cyprus, through research, monitoring, lobbying and conservation and awareness-raising actions.

It is the national partner of BirdLife International, a global partnership of nature conservation organisations working in more than 100 countries worldwide.

The motives behind placing bait vary. Every year poison is placed a few weeks prior to and during hunting season with the aim of eliminating carnivores such as foxes, as it is claimed that they significantly impact the populations of game species, according to BirdLife Cyprus.

Poisoned baits may also be used by hunters to prevent other hunters from hunting in ‘their’ areas, or by farmers to prevent hunting on their land.

Farmers may use poisoned baits to exterminate carnivores such as foxes and stray dogs to protect livestock. However, the use of poisoned bait is both illegal and dangerous and can cause indiscriminate death.

For example, poisonings affect a number of protected species including birds of prey such as the Griffon vulture, Bonelli’s eagle and long-legged buzzards, which are permanent inhabitants of the island, Theodorou said.

“This lethal tactic also affects birds of prey that use the island for a certain period of time for rest and feeding during their migration.”

These include black kites, common Buzzards and more.

Two other vulture species which are also highly vulnerable to the use of poisoned bait are the Egyptian vulture (Neophron percnopterus) and Cinereous vulture (Aegypius monachus). The Egyptian vulture is a rare migrant visitor and the Cinereous vulture previously used to inhabit the island but became extinct during the 1950s, primarily due to the extensive use of poison.

This problem is also highlighted by the collapse of the raven (Corvus corax) population in Cyprus. This bird is an efficient scavenger and its disappearance from areas where it was once widespread is very often linked to widespread poison use, Theodorou said.

The use of poisoned baits is also the main cause driving the vulture population to extinction in Cyprus and has been documented as the leading cause of the rapid decrease of the Griffon vulture Gyps fulvus population in Cyprus since the 1950s – around the same period that the Cinereous Vulture became extinct.

Vultures, although not the target, fall victims of poisoning due to their scavenging and social feeding habit which means that large numbers can be poisoned on a single poison-laced carrion.

Despite currently being considered the most threatened and endangered species of bird in Cyprus, historically and until mid-20th century the species’ population numbered in the hundreds, according to Birdlife Cyprus.

During this period, the griffon was widespread in Cyprus, found in the Pentadaktylos and Troodos mountains and the coastal areas of Episkopi cliffs and Akamas peninsula.

Up until the 1980s, it is estimated that around 15 different breeding colonies existed on the island. However, since then the population of the Griffon vulture in Cyprus has decreased dramatically.

A recent study, produced as part of the ongoing conservation project LIFE with Vultures, predicts that with the current frequency of poisoning incidents the Griffon vulture population will be extinct within 15 years, Melpo Apostolidou, project coordinator, informed the Cyprus Mail.

In the recent past, the use of poisoned baits jeopardised conservation efforts to safeguard and reinforce the local population through restocking. A characteristic example is the mass poisoning that took place at Paramali–Sterakovou area in late 2015 and caused the death of eigth vultures.

“In the last five years alone (2015-2020), 39 confirmed cases of poisoned bait in the countryside have been recorded, with 63 animals killed including the eight vultures. Unfortunately, the total impact of this illegal practice is underestimated as it is not possible to detect all cases of poisoning or their victims,” she said.

The ongoing LIFE with Vultures project aims to save the Griffon vulture from extinction and improve its conservation status. This will be achieved by addressing key direct threats including the use of poisoned baits and by releasing birds brought in from Spain to boost the local population. Awareness will also be raised among stakeholders and target groups, Apostolidou said.

One of the main actions of the project is the creation of two anti-poisoning dog units that will be able to detect poisoned bait and victims of wildlife poisoning. These specialised units will operate under the Game and Fauna Service and will provide an insight into the true extent of the problem. It will help significantly in locating and removing poison from the countryside and act as a ‘discouraging factor for offenders.’

In addition, training workshops and courses will be held for the police, the veterinary services and the state general laboratory that will be led by experts from Spain; a country widely regarded as pioneer in tackling poison use through planned management, investigation and the application of penalties to the offenders.

The project foresees the elaboration of a, ‘National Anti-poison Road Map,’ that will bring together relevant stakeholders, (land users, government authorities and NGOs), in order to lay down an agreed long-term plan to address and deal with the problem of poison bait use effectively.

“The handling of poisoning incidents is complicated, and we are working with the authorities, including the police, to establish a protocol that will lead to effective enforcement. This crime demands the involvement of the prosecuting authorities in order to achieve proper investigation of the cases with the aim to bring perpetrators to justice,” Theodorou said.

In order to raise awareness of the critical status of the Griffon vulture in Cyprus, its importance for the ecosystem, the threats it faces and the importance of the Natura 2000 network, a number of awareness campaigns will take place at key communities which will target, farmers, hunters and school children.

“We are optimistic that with training, the police and other authorities will be able to conduct investigations that would allow legal cases on the matter to materialise.”

The public aware of poisoned bait use should inform the relevant authorities:

Europe gets a new unicorn; Mambu, valued at $2.08bn