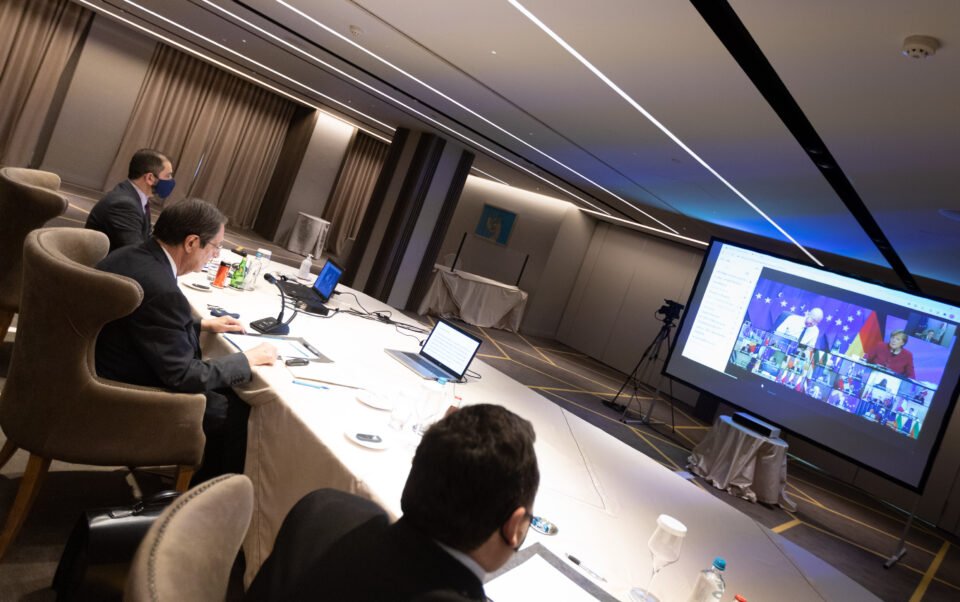 President Nicos Anastasaides told EU leaders on Thursday that despite Turkey’s temporary suspension of illegal activities in Cyprus’ EEZ, and its provocations against other member states, the bloc was not in a position to engage in a meaningful dialogue on issues related to the so-called “positive agenda” with Ankara.

In its final conclusions from the summit via teleconference on Thursday the EU is expected to make good on a 2016 promise to deepen trade ties with Turkey, but will also warn Ankara to expect sanctions if it restarts exploration over disputed hydrocarbons in the eastern Mediterranean.

According to a statement from government spokesman Kyriakos Koushos, in his intervention at the Council meeting, Anastasiades stressed that the observed de-escalation by Turkey “should have consistency and continuity”.

“Turkey should demonstrate by deeds its sincere intention to engage constructively with all member states, away from threats and blackmail,” he said.

At the same time, Anastasiades reminded that the previous conclusions of the European Councils, as well as the recent report of the President of the European Commission and the EU High Representative for Foreign Affairs and Security Policy, record specific measures that should be taken if Turkey again commits illegal actions or violations of the sovereign rights of Cyprus and Greece.

Referring to the Cyprus issue, he called on the European Union not to remain inactive in the event that Turkey takes any more actions related to the opening of the fenced-off area of Varosha in violation of UN Security Council Resolutions “irreversible consequences will be created regarding the any prospect of resolving the Cyprus issue”.

He also slammed the public rhetoric by both Turkey and the Turkish Cypriot side about a two-state solution “that runs counter to the decades-long agreed form of solution”.

In view of the forthcoming informal Conference on Cyprus in Geneva next month, the president reiterated his determination and sincere will to go there to negotiate constructively in order to create the necessary conditions for the resumption of negotiations from the point where they were suspended in Crans-Montana in 2017.

Anastasiades also spoke of the issues with immigration saying that despite the fact that Turkey has received significant financial assistance for the accommodation of refugees, “it still behaves as an unreliable partner, refusing to cooperate with member states of the Union”.

“On the contrary a new dangerous route from Turkey to Cyprus has been created , which has resulted in the last four years with Cyprus holding first place in Europe in terms of migration flow,” he said.
Asylum seekers and those under international protection, now make up 4 per cent of the population of Cyprus, he added

In these circumstances, the president said the whole issue of additional funding to Turkey can not be considered in isolation from the broader context of Turkish behaviour towards its neighbours, the European Union and all member states.

Regarding the Customs Union, he pointed out again that Turkey was violating its contractual obligations towards the Union, due to its ongoing blockade of Cyprus.

He stressed that any positive move by the EU towards Turkey should be based on the the idea that any constructive actions by Turkey towards the EU and Member States be lasting in practice.