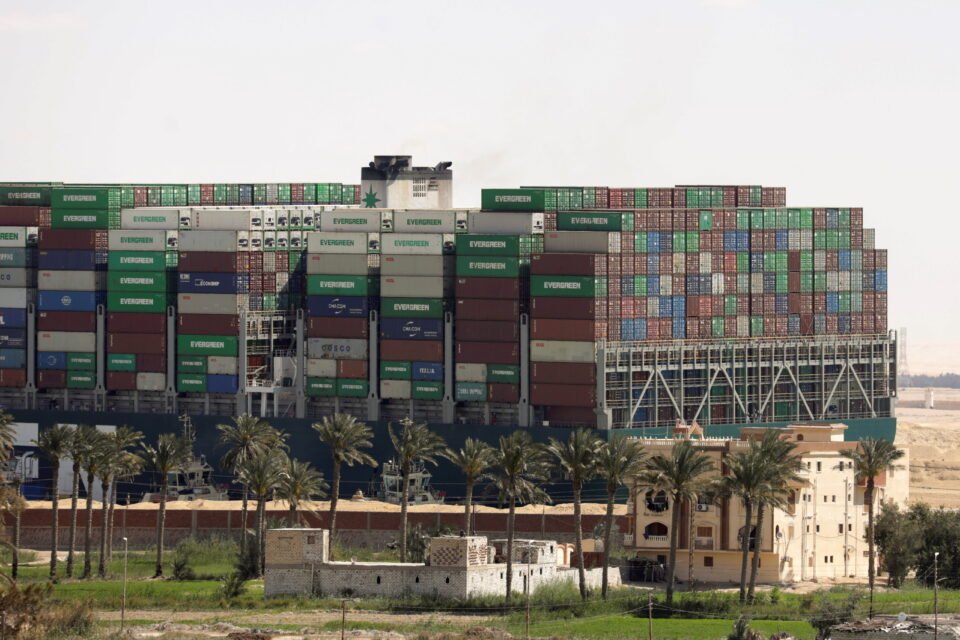 The ship Ever Given, one of the world's largest container ships, after it was refloated, in Suez Canal

“We’re waiting on food goods like coconut milk and syrups, some spare parts for motors, we’ve got some fork lift trucks, some Amazon goods on there, all sorts,” said Steve Parks of Seaport Freight Services in England, who is awaiting twenty of the 18,300 containers aboard the ‘Ever Given’. Which of those things cannot be sourced from somewhere closer than Asia?

Oh, all right. Coconut trees don’t grow in Europe, where ‘Ever Given’ is bound. But at least 80 per cent of the cargo on that gigantic container ship blocking the Suez Canal and the 320 vessels backed up behind it (of which a third are container ships and car-carriers) didn’t really need to be moved halfway around the world. The stuff could be made a lot closer to where it is wanted. In fact, that used to be how things worked.

Now that the delinquent megaship has nearly been freed from the bottom, normal service will resume and 50-odd ships, bearing one-eighth of all the world’s international trade, will once again pass through the Suez Canal each day. Egypt will doubtless reconsider its decision to leave the southern third of the canal single-lane, and everybody will live happily ever after.

The sole justification for this most extreme manifestation of globalisation is that the wage rates are lower on one side of the world than on the other. But it’s murder on the crews, mostly poor people from poor countries who aren’t even allowed ashore when the ships stop briefly in ports. And it’s hell on the environment, because almost all these ships are burning bunker oil.

Bunker (Heavy Fuel Oil – HFO) is the tar-like residue that remains at the end of the process of distilling and ‘cracking’ petroleum, after the lighter hydrocarbons like gasoline and diesel have been removed.

A relevant comparison, perhaps, is between the shipping and the aviation industries. Each accounts for about 3 per cent of total emissions of human origin, they are both growing fast, and they are both very hard nuts to crack.

Their shared basic problem is that you can’t easily electrify ships and planes. Electricity produced from nice, clean sources like solar or wind or hydro-power is little help because of the deplorable lack of very long extension cables, and batteries are too heavy for planes and not long-lasting enough for ships that spend weeks at sea.

That is why both seaborne trade and commercial aviation were excluded from the start from the emissions quotas that countries have signed up for. Instead, the International Maritime Organisation (IMO) and the International Air Transport Association (IATA) were given the job of reducing the emissions of their own industries. With exactly the results you would expect.

The IMO promised an actual reduction in carbon dioxide emissions from shipping for the first time in 2018: a 50 per cent cut by 2050. Not ‘net-zero’ emissions by 2050, like 110 countries have pledged, but just half that. It’s a start – or it would be except that the IMO is not going to start enforcing emissions reductions until 2029 or 2030.

There are two ways to limit the damage from marine fuel emissions. One is to burn low sulphur bunker (an extra $15-20 per metric ton), which cuts harmful sulphur dioxide emissions but doesn’t lower CO2. But what most ships are actually doing is burn the cheapest bunker oil, install ‘open-loop scrubbers’ to bring the emissions down to 0.5 per cent sulphur instead of 3.5 per cent – and dump the excess sulphur into the ocean.

The one way to cut maritime carbon dioxide emissions fast is to lower the speed of the ships: reducing a large ship’s speed by 10 per cent cuts its CO2 emissions by 27 per cent. But the best measure of all, until a new generation of wind-driven cargo ships matures, is to cut the sheer volume of trinkets travelling by sea.

You can still have your cheap garden furniture, brand-name sneakers and plastic Easter eggs if you want, but make them closer to home and pay a little more. And put at least as much pressure on the world’s shipping industry for emissions cuts as popular opinion is already exerting on the aviation industry.