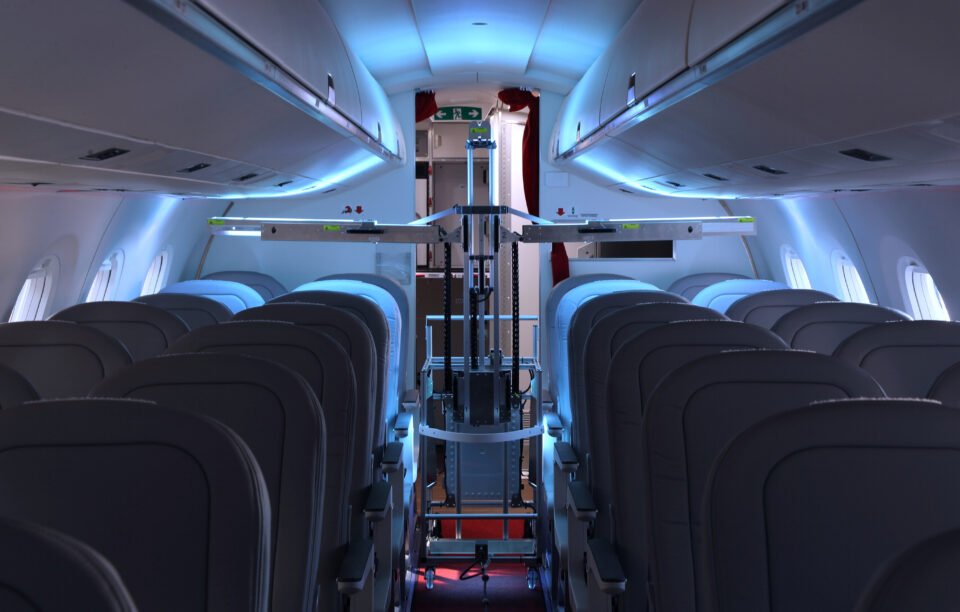 A robot developed by Swiss company UVeya armed with virus-killing ultraviolet light is seen during tests aboard an Embraer airplane of Helvetic Airways, as the spread of the coronavirus disease (COVID-19) continues, at Zurich Airport in Zurich, Switzerland March 31, 2021. Picture taken March 31, 2021. REUTERS/Arnd Wiegmann

A robot armed with virus-killing ultraviolet light is being tested on Swiss airplanes, yet another idea aiming to restore passenger confidence and spare the travel industry more pandemic pain.

UVeya, a Swiss start-up, is conducting the trials of the robots with Dubai-based airport services company Dnata inside Embraer jets from Helvetic Airways, a charter airline owned by Swiss billionaire Martin Ebner.

Aircraft makers still must certify the devices and are studying the impact their UV light may have on interior upholstery, which could fade after many disinfections, UVeya co-founder Jodoc Elmiger said.

“This is a proven technology, it’s been used for over 50 years in hospitals and laboratories, it’s very efficient,” Elmiger said on Wednesday. “It doesn’t leave any trace or residue.”

Elmiger’s team has built three prototypes so far, one of which he demonstrated inside a Helvetic jet at the Zurich Airport, where traffic plunged 75% last year.

The robot’s lights, mounted on a crucifix-shaped frame, cast everything in a soft-blue glow as it slowly moved up the Embraer’s aisle. One robot can disinfect a single-aisled plane in 13 minutes, start to finish, though larger planes take longer.

Dnata executives hope airplane makers will sign off on the robots — Elmiger estimates they’ll sell for 15,000 Swiss francs ($15,930) or so — as governments require new measures to ensure air travellers don’t get sick.

“We were looking for a sustainable, and also environmentally friendly solution, to cope with those requests,” said Lukas Gyger, Dnata’s chief operating officer in Switzerland.

While privately owned Helvetic has not needed bailouts like much of the industry, its business has also been gutted, with its fleet sitting largely silently in hangars. UVeya’s UV robots may help change that, said Mehdi Guenin, a Helvetic spokesman.

“If our passengers, if our crew know our aircraft are safe — that there are no viruses or bacteria — it could help them to fly again,” Guenin said.

Lute due in Cyprus ahead of Geneva talks