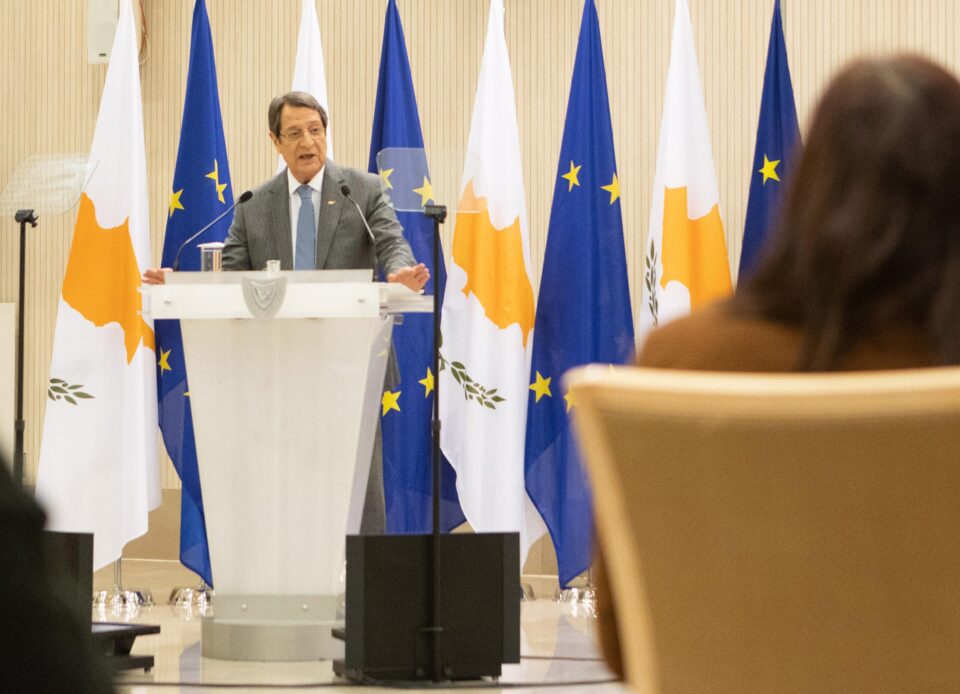 The former president says Anastasiades must be convincing about accepting political equality.

President Anastasiades needs to dispel the doubts that exist about his commitment to a bizonal, bicommunal federation (BBF) clearly and decisively for the five-party conference later this month to be successful, former president George Vassiliou has said.

In an interview with Kathimerini last Sunday, Vassiliou said Anastasiades “must repeat that he accepts bizonal bicommunal federation, but must also go a step further”. He must “say he accepts the Guterres framework, accepts that the talks cannot go on indefinitely and say this in a convincing way”.

He also has to be convincing about political equality, as Turkey claimed in the last negotiations at Crans-Montana “we did not accept political equality in a clear way.” He must reconfirm his acceptance, said Vassiliou, who served as president between 1988 and 1993, a time in which he had to deal with the uncooperative Rauf Denktash on the Cyprus problem.

Vassiliou, who makes a habit of cutting through the Cyprus problem slogans and platitudes used by the Greek Cypriot political parties, addressed those that spoke of the danger of a bad settlement.

He was equally direct about the fears of sovereignty equality stressing that this was impossible and asking: “Is it possible for anyone to believe that the EU would agree to a settlement that would lead a small Cyprus to become two states?”

This would mean the dissolution of the EU he said, highlighting the separatist movement in Catalonia. “Why not allow Spain to be three or more states? Why not in Italy and everywhere there is a minority have its own state? Something like this will not happen.”

On the issue of Greece-Turkey relations, about which many in Cyprus had expressed concerns because Greece is making her own overtures, Vassiliou refused to follow the conventional thinking, seeing this as a positive thing. Greece wants to improve relations with Turkey he said.

“Unfortunately, many of us believe that Greece-Turkey relations must not improve because this will harm Cyprus. I believe the exact opposite – from the moment Turkey shows goodwill towards Greece, then it would be very difficult not to show goodwill towards us.”

He was scathing about the government’s trilateral alliances with countries in the region which offered “nothing substantive” and caused the deterioration of relations with Turkey, which wanted to have a part in what was happening in the eastern Mediterranean.

“Our mistake was that we made an attempt to isolate Turkey,” he said, adding that Cyprus must understand that in foreign policy you must be pragmatic.

“How could you possibly think that you can exclude Turkey from the eastern Mediterranean? And how is it possible to think that the EU, given the importance it attaches to its relations with Turkey, would impose sanctions?”

Vassiliou has always been viewed as an optimistic politician, but he said he was worried because if the meeting ended in failure it would be the end of the road for the Cyprus problem and the cost would be huge. He said if the international community decided at Geneva there was no prospect of a settlement, the Security Council would withdraw Unficyp at a certain point.

“The consequences of such a decision would be dramatic for our side because the withdrawal of the peacekeeping force would mean the buffer zone would end up in the hands of the more powerful side. Not only would we lose about 3 per cent of territory in the buffer zone but we will also have to face the harsh reality of ‘borders’ about 200km long and we would be in no position to ensure the security of the dividing line.”

His advice to Anastasiades, apart from being convincing about his commitment to BBF, would be to stress the huge benefits a settlement would bring for both Greek and Turkish Cypriots. Only a settlement can provide security he said.

“We would also send the message to the international community that Cyprus is open for investments that are not happening now because of the lack of security.”