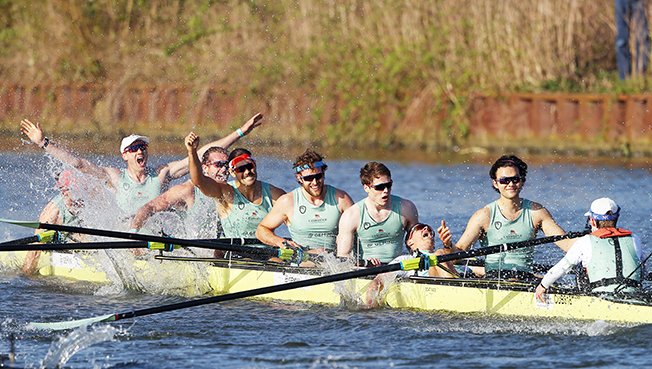 Cambridge’s recent stranglehold on the Boat Race continued as they pipped Oxford in both the men’s and women’s events by less than a length in a unique year for the traditional showdown between the two universities.

Moved away from its usual residence along the Thames to Ely in Cambridgeshire for the first time since the Second World War due to the coronavirus pandemic, the narrower Great Ouse presented moments of drama in both contests.

Sarah Winckless, the first female to umpire the men’s race in the 166th edition, repeatedly warned Cambridge cox Charlie Marcus to alter his crew’s line as they drifted in from the right of the river bank to the centre.

It was a bold strategy from Cambridge, who nevertheless avoided a clash of oars as they hit the front early on. While Oxford stayed hot on their heels of their great rivals, they were never able to reel them in.

“I had to be as far over as I could. I never fouled them, so that’s what I had to do,” Marcus said on BBC One. “About three strokes before the finish was when I thought we had this won.”

There was a moment of minor concern when Winckless warned of reeds in the middle of the river but the crews passed them without incident.

Cambridge were left celebrating their third win in a row and a fourth in the last five events.

“You dream of this moment,” Cambridge rower Theo Weinberger said. “I don’t know what to say, it’s two years’ worth of training and hard work, it just means so much and I don’t think there’s anything you can quite compare it to.”

It was more of a seesaw affair in the earlier women’s race but Cambridge were left celebrating their fourth successive victory.

Oxford were repeatedly warned by the umpire for encroaching on their rivals’ line but Cambridge held their nerve, establishing a slender lead after halfway which they never surrendered.

Dylan Whitaker, the winning cox, was full of praise for his opposite number Costi Levy.

He said on BBC One: “Massive, massive props to Costi because she steered like an absolute champ. That was close but we knew what our plan was, we kept it calm and loose and it worked.”

Sarah Tisdall added: “Awesome race, massive congrats to Oxford. That’s the closest boat race the females have had. Awesome day for women’s sport and really proud of this team. It’s been awesome.”

He said: “Huge congratulations to both crews in the Boat Race. They did the Light Blues proud in two hard-fought duels against battling and determined Oxford opponents.

“Every member of each crew played their part in an afternoon of extraordinary sporting excitement.”