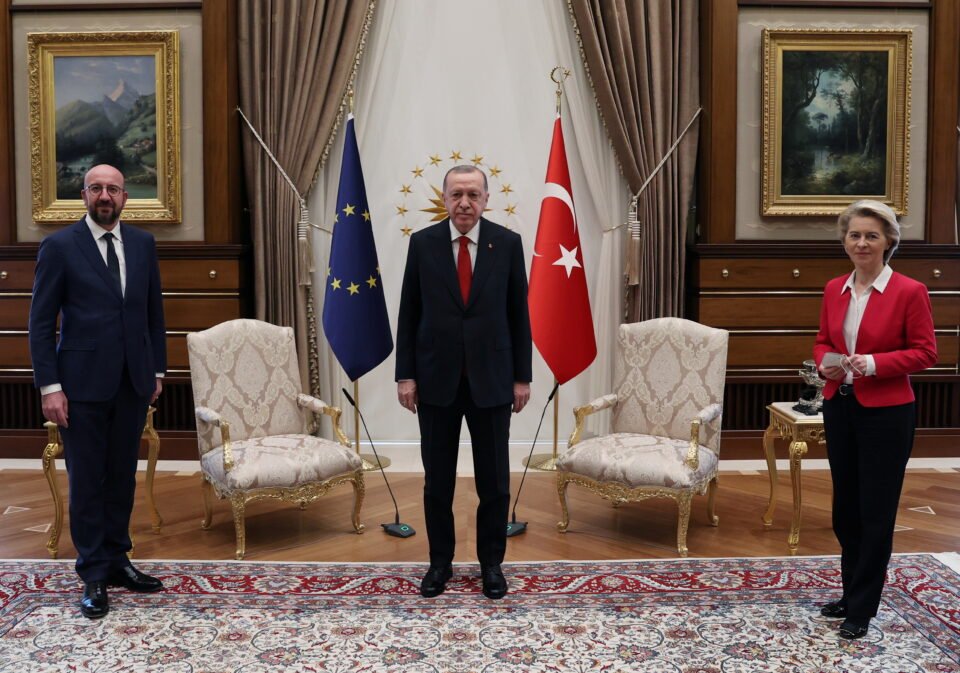 European Commission President Ursula von der Leyen was taken aback to find her fellow top EU official taking the only chair available next to Turkish President Tayyip Erdogan when the duo visited Ankara, and her spokesman made that clear on Wednesday.

Footage from their meeting on Tuesday showed the first female head of the EU executive, the only woman in the talks, gesturing in disbelief and uttering a surprised sigh as Erdogan and European Council President Charles Michel took the two centre-stage seats prepared, relegating her to an adjacent sofa.

“The president of the Commission was clearly surprised,” said the EU executive arm’s spokesman, Eric Mamer.


“The president (von der Leyen) should have been seated in exactly the same manner as the president of the European Council and the Turkish president.”

The Turkish government did not immediately respond to a request for comment.

However, a member of the European parliament, Sophie in ‘t Veld, asked why Michel had not reacted.

While the Commission conveyed von der Leyen’s irritation, an EU official who declined to be named said that to do so might have provoked a “protocol and political incident, both towards Turkey and the European Council”.

“Turkey meant no disrespect,” the official said. “It extended a very courteous welcome to both presidents and strictly adhered to international protocol.”

In the past, three chairs were provided when the Turkish leader visited Brussels for talks with the heads of the Commission and the European Council, which collectively represents the bloc’s 27 member states.

Mamer said von der Leyen decided not to make “an issue out of it” and in the conversation brought up women’s rights and the Istanbul Convention on violence against women, from which Turkey withdrew last month.

Ties between Brussels and Ankara have been strained since a coup attempt in 2016 prompted a crackdown on civil rights in Turkey, but they are now testing a cautious rapprochement.

Lockdown led to one third fall in drug cases