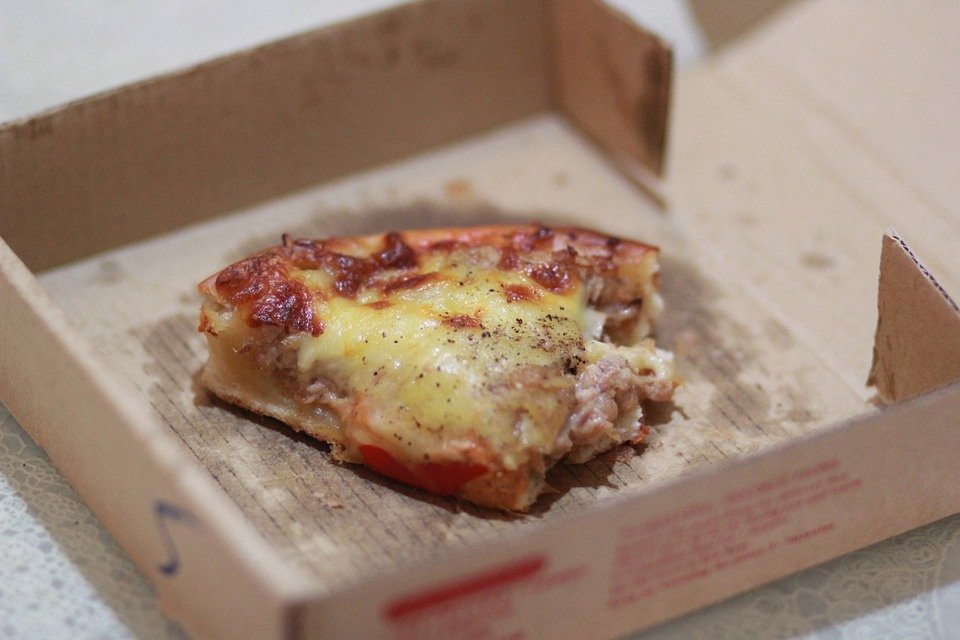 But as pay-as-you-throw approaches, there’s no avoiding it. We all have to learn

Are you one of the 88 per cent of people in Cyprus who believe it’s a good idea to recycle your household waste?

In which case you probably have some questions on what you can recycle, and what is being done with the stuff you so meticulously separate from other waste. As always, it is more complicated than you think. What might be recyclable in other countries is not necessarily so here.

Can your carboard pizza boxes be recycled? Maybe. Surely plastic containers and paper cups are? Sadly, most food containers from deliveries and takeaways and plastic and paper coffee cups are not among the items accepted by Green Dot, the only company in Cyprus which collects recyclable household waste

What most of us do know, even those who do not need a lesson in recycling for dummies, is that recycling only comes in as a poor third of the three pillars of waste management: reduce, reuse and recycle.

For this article, we will assume that readers already do as much as they can to contribute to the first two pillars.

Green Dot can collect our recyclable items from homes in bags which are available in every supermarket: brown ones for paper and clear bags for PMD – plastic, metal and drink cartons.

Rural areas are less lucky, as residents have to use bins – with the same colour codes – in designated areas.

Unlike other items, glass is not collected from homes as it is dangerous both for the collectors and for passers-by if left out on the pavement and for this reason should be placed inside the special green glass recycling bins available in urban and rural areas.

So how far can we rely on Green Dot to get plastic items we use every day recycled? And, what can be recycled in Cyprus? Well, it’s a mixed bag, quite literally.

According to the company, around 30 per cent of items placed in the PMD bags should not be there.

“People usually put other materials in the PMD bag which either are the wrong materials like the materials that are not included in the PMD category or they even put garbage in the bag. Also, the most common material we find in PMD bag or bin is glass,” Christiana Georgiou commented on behalf of Green Dot.

“When people place wrong materials in the bag or packaging with liquids and food they contaminate other recyclables. If recyclable material is contaminated, then it cannot be recycled as the recycling industry will not accept it.”

Which brings us back to those food containers and plastic coffee cups. Instructions on the PMD bags and a leaflet published by the company say what can be included, but what is not allowed is less obvious and at times puzzling.

“PMD does not include plastic toys, plastic chairs, plastic plates/cups or polystyrene,” the company clarified.

There is a good reason, the recycling company says.

“We do not collect plastic food containers from deliveries because most of them are not from a plastic type that we collect. Even if they are, people do not clean them and they place them with food residue in the bag with the result that other recyclables get destroyed.”

What about if I know that a plastic food container is recyclable, and I clean it really well? Here it gets more confusing.

If you are such a person, then you may include them, Georgiou said.

The problem, she said, is that the public is not aware of details such as specific plastic types.

The company has to stick to simple instructions, otherwise people will get confused and/or may refuse to recycle at all, which is why they simply say no to all food containers, though some may well be recyclable.

“Usually these cups are plastic with number 6 [polystyrene] which is not included in the plastic type we collect.”

“Furthermore, people usually do not clean them.”

Those plastic types again. It seems if we do want to get it right, we do need to know about plastic categories.

They are certainly not easy to detect.

Only someone with good eyes or a magnifying glass can find the plastic code which is present on bottles, containers and the like, usually hidden in small numbers at the bottom of the items.

Items are marked from 1 to 7: 1 being the easiest to recycle, 7 usually impossible, and polystyrene – as in those plastic cups – is number 6.

Plastic tubing, kids’ toys, plastic trays and furniture are often made out of PVC, which is number 3. They are impossible or extremely hard to reprocess.

Plastic packaging such as that used for pasta and lentils may be recycled in other countries – but not in Cyprus – so don’t let the recycling sign on the packet fool you.

So much for plastic. Paper is a little easier to understand, and Green Dot reports only 10 per cent of the bags contain material which should not be there.

A problem here is that many of us drink from paper cups which are not going to be reprocessed either.

“They are not pure paper but contain synthetic material that cannot separated and recycled. Manufacturers apply a thin plastic layer that makes the cup waterproof,” Georgiou said.

“Napkins and wrapping paper are not included in the paper category. Anyhow they are not pure paper,” she added.

Pizza trays? Not an easy yes or no, as I said in the beginning.

“Usually there is an extra piece of paper inside the tray that absorbs oil from pizza. When the paper is thrown away, the tray can be recycled.”

Paper and cardboard can be placed in the designated brown plastic bags, tied together into a ream or placed into large cardboard boxes.

Metal? You may include drink and food cans, and metal lids – but not aluminium wraps, as these as well may contain food residue difficult to remove.

“As concerns aluminium trays, if they are clean and placed in PMD bag, we will process them. Most of the times they are oily with food residue,” Georgiou said.

How clean they need to be is anybody’s guess.

So much for the collection of materials, but this recycling for dummies article promised to also answer questions of what happens to the stuff we collect. 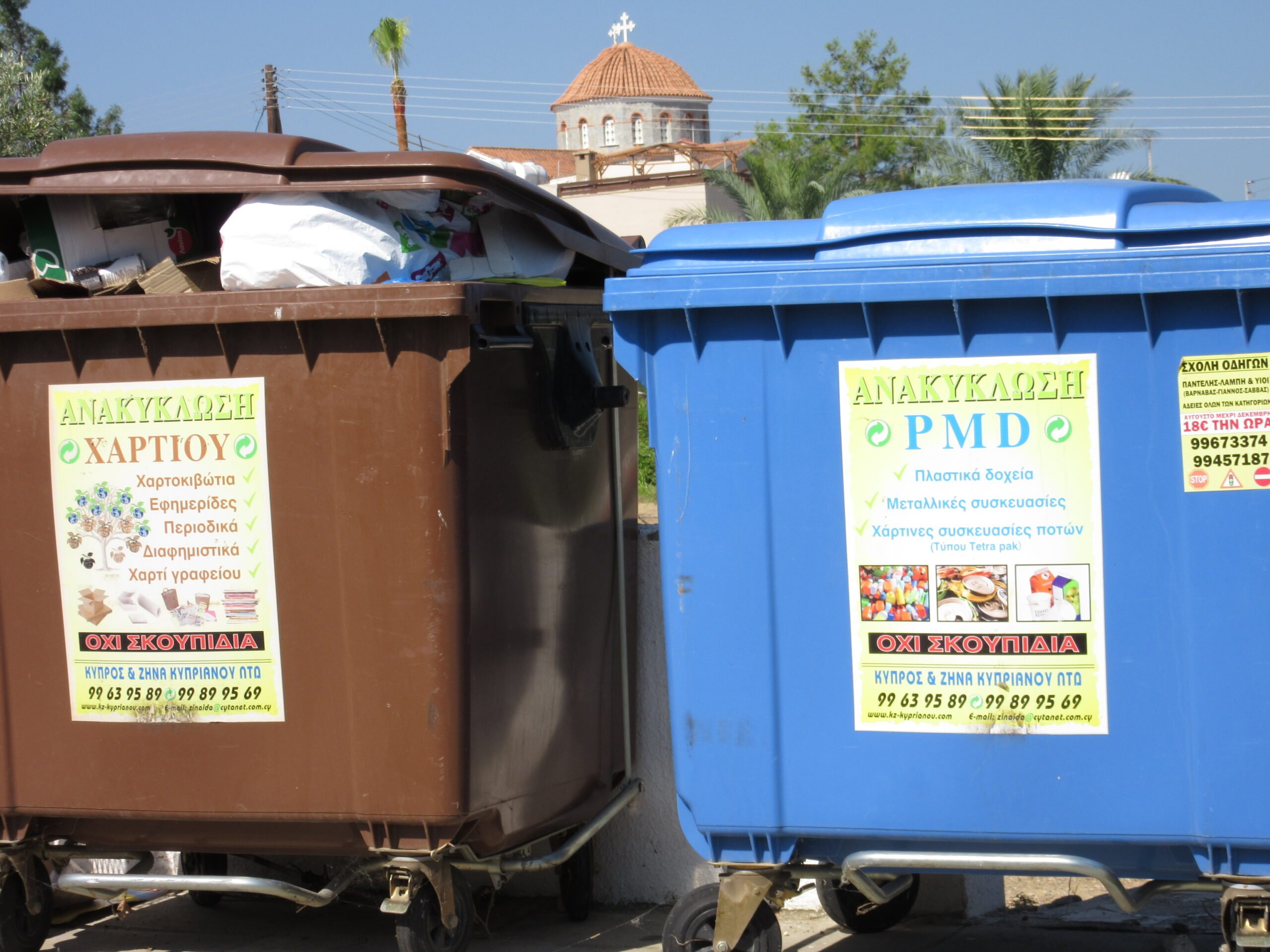 It comes back to the type of plastic and this can be surprising. Water bottles are not only made into other bottles, but can be made into carpets!

Shampoo bottles? They can be transformed into laundry detergent and oil bottles, but according to numerous websites also into pens, recycling containers, floor tiles, drainage pipes, benches, dog houses and picnic tables.

Take a new look at your broom and bicycle rack: it may have been recycled from bottle caps and straws.

Possibilities in Cyprus are limited, seeing that so much is not being reprocessed and that Green Dot is the only company which collects and recycles household waste in Cyprus.

Last week, he welcomed the upcoming introduction of a new bill on integrated waste management that includes a universal pay-as-you throw policy, to be put in place within six months after the bill is passed into law.

Under the new system, people would have to buy their rubbish bags from the local authority and pay for what they discard, and not what they recycle.

Plus, this is only part of an integrated waste management programme by the EU – on which part of our Covid recovery funds rely – which aims at increasing recycling opportunities.

Being a recycling dummy will no longer be an option.

Akamas: soon to be wild no more