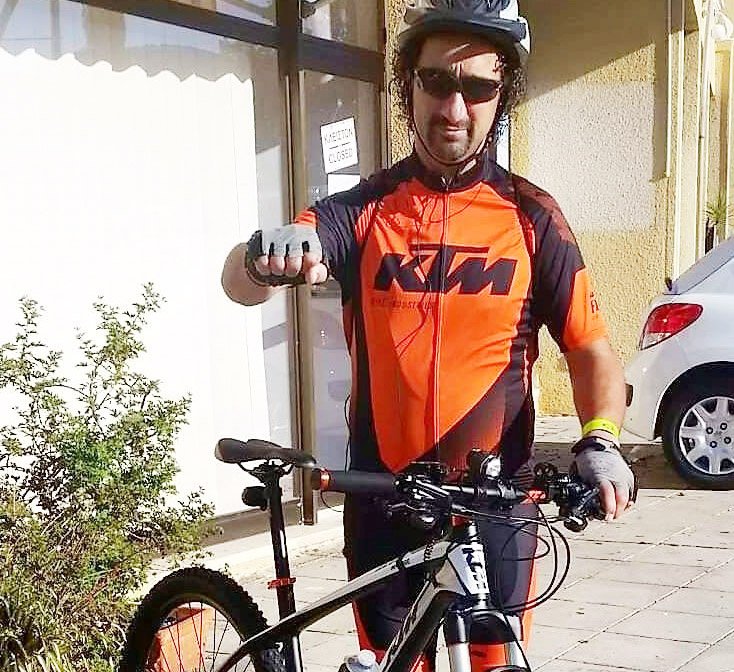 Paphos based cyclist Petros Stylianou will set off on a new venture on Saturday morning with the aim of raising as much money as possible for an initiative that is helping needy families in Cyprus.

He will set off from Tala square at 7.30am and is hoping that people will be there to see him off. His aim is to cycle all over Cyprus during the coming weekends, to raise funds for ”Αγκαλιαζω με Αγάπη”- The Embrace with Love association, he informed the Cyprus Mail.

“Every day this association get phone calls from people in need with no money whatsoever. They have no food or electricity and some cancer patients have no money for their medicine, I want to help and raise as much as I can,” he said.

On Sunday he will tackle the villages of Kouklia, Timi and others in the area, he said.

Stylianou also explained that supporters can buy tickets of different prices and all of the money will go to the cause.

The cyclist is a popular figure and the winner of the 2019 Heart of Gold Cyprus Award for his ongoing fundraising efforts and courage.

Stylianou was diagnosed with stomach cancer around nine years ago and given a 10 per cent chance of survival. He started cycling and has not stopped since, participating in many marathons and cycling tours all over the world raising thousands for charities and individuals.

He recently cycled to the parliament to highlight the urgent need to establish an oncology centre in the coastal town.

Currently, cancer patients mostly have to travel to Nicosia for treatment which on top of coping with their ailments can prove exhausting, he said.

He addressed MPs to explain the need to create such a centre.

The cyclists’ goal now is to raise as much money as possible to help create an oncology centre in Paphos. He noted that a small oncology centre will cost around €11 million and Archbishop Chrysostomos is interested to help and has pledged €3 million towards setting it up.

“I will raise as much as I can for this centre and when the pandemic allows, probably in October, or November I will start to cycle all over Europe to raise funds,” he said.

He expects the venture to take around 6 months and will include 28 European countries.

“I want to thank everyone with their big hearts that are helping me to set up this oncology centre. It means so much,” he said.

‘Harry Potter’ and the translator’s nightmare