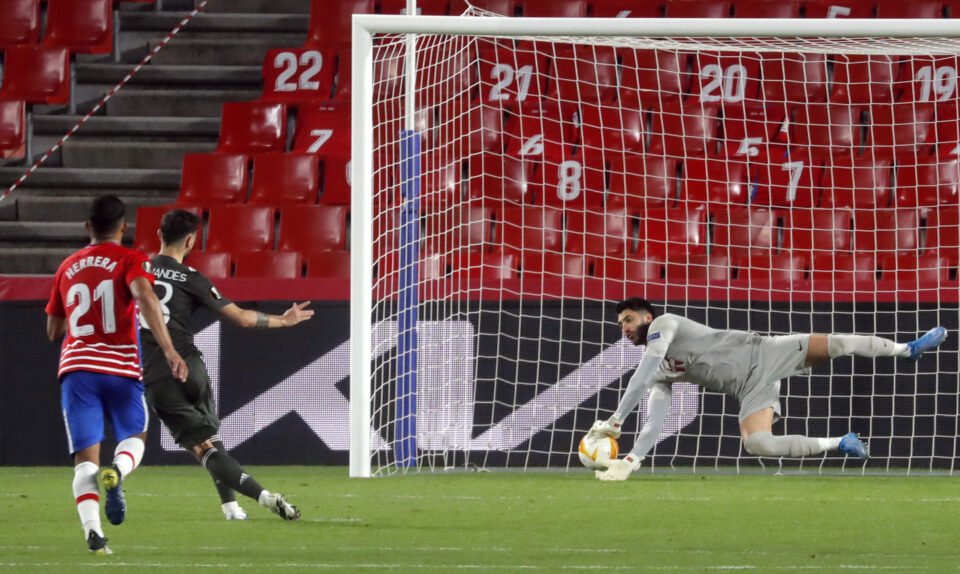 Manchester United’s Marcus Rashford and Bruno Fernandes secured a hard-fought 2-0 victory at Granada in the Europa League quarter-final first leg to put their side in the driving seat.

In a game where clear-cut chances were sparse, Rashford’s goal just past the half hour was the standout piece of quality.

The England forward controlled a long ball from Victor Lindelof before coolly finishing to put United ahead and notch up his 20th goal of the season in all competitions.

Granada fought valiantly for a way back into the game, with Chelsea loanee Kenedy testing David de Gea from long-range before Yangel Herrera – on loan from Manchester City – hit the post with a volley.

Fernandes, denied a second goal by a save from Portuguese countryman Rui Silva from close range late on, then netted a stoppage-time penalty after being felled by Yan Brice Eteki.

The return leg is next Thursday at Old Trafford and the winners of the tie will face the victors in Ajax Amsterdam’s clash.

Roger Ibanez crashed home a spectacular volley two minutes from time to give AS Roma a come-from-behind 2-1 away win over Ajax Amsterdam in their Europa League quarter-final first leg.

A missed penalty and a horror goalkeeping slip cost Ajax dearly as they lost a halftime lead and now face a tough task in next Thursday’s return leg in Rome.

Ajax went ahead from Davy Klaassen’s goal six minutes before halftime and should have doubled the lead soon after the break but Dusan Tadic’s penalty was saved.

Lorenzo Pellegrini equalised with a 57th-minute free kick, which slipped through the hands of Ajax’s 21-year-old back-up goalkeeper Kjell Scherpen.

Ibanez secured the last-gasp win as he chested down a poorly cleared corner before slamming the ball home from close range.

Villarreal took a big step towards reaching the Europa League last four after a first-half penalty from forward Gerard Moreno gave them a 1-0 win at Dinamo Zagreb in their quarter-final first leg.

Moreno sent goalkeeper Dominik Livakovic the wrong way with a coolly taken spot-kick in the 44th minute after his cross from the left hit Kevin Teophile-Catherine on the arm.

Dinamo staged a major upset to reach the last eight with a 3-2 aggregate win over Tottenham Hotspur but never looked like repeating a stunning 3-0 second-leg win over the Premier League side as they lacked ideas and cutting edge.

The Croatian side were confined to a handful of long-range efforts while their Spanish rivals missed several chances to win by a bigger margin, with substitute Paco Alcacer dragging a close-range shot wide in the 65th minute.

A deflected shot by Manuel Trigueros drew a fingertip save from Livakovic as the visitors found gaps in Dinamo’s half with the home side throwing men forward.

Villarreal were let off the hook in the 26th minute when Mislav Orsic, who bagged a hat-trick against Spurs, had a goal disallowed for offside in the build-up.

Tomas Holes headed a stoppage-time equaliser as Slavia Prague secured a 1-1 draw away to Arsenal in the first leg of their Europa League quarter-final.

It looked as though substitute Nicolas Pepe’s 86th-minute effort had given the hosts a narrow advantage to take to the Czech Republic for next week’s second leg.

But Holes headed home to deflate Arsenal and keep the tie balanced on a knife edge.

An often subdued game was punctuated by good chances for both sides with Arsenal guilty of wasteful finishing.

Bukayo Saka curled an effort wide in the first half while Willian and Alexandre Lacazette were both denied by the woodwork for Mikel Arteta’s side after the break.

Slavia had their moments and Petr Sevcik squandered a good chance to put them ahead while Lukas Provod had a shot turned against the woodwork shortly before Holes equalised.

Our View: People’s fears will delay the national vaccination programme