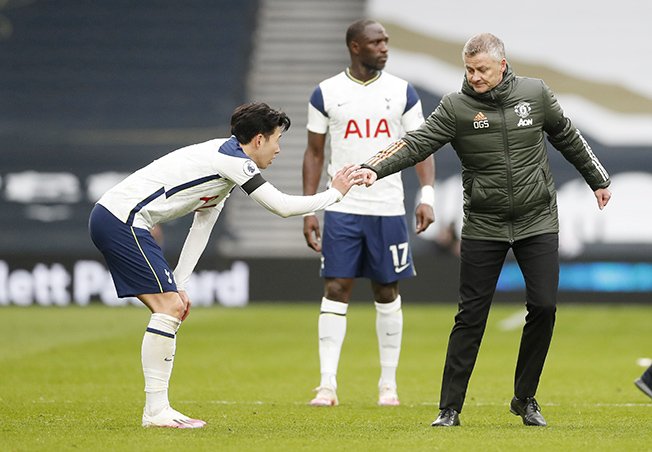 South Korean Son went down clutching his face after being accidentally caught by the hand of Scott McTominay in the build-up to an Edinson Cavani goal that was controversially ruled out after a VAR check in north London.

With Son in apparent agony on the ground, United’s Paul Pogba played in Cavani who thought he had given his side a 34th-minute lead, only for VAR to intervene and referee Chris Kavanagh ruling it out after checking a monitor.

“We shouldn’t be conned. I have to say, if my son stays down for three minutes and he needs his 10 mates to help him up, he won’t get any food,” Solskjaer said of the incident.

“We weren’t conned, the referee was.”

“Top reaction, we played some great stuff second half. We felt the injustice and we showed good character to come back,” Solskjaer said.

After Tottenham’s 10th league defeat of the season put a huge dent in their top-four ambitions, Mourinho bizarrely chose to vent his frustration at Solskjaer, the man who replaced him in the Old Trafford hot seat.

“First of all, let me tell you something. I’m very, very surprised that after the comments that Ole made on Sonny, you don’t ask me about it,” Mourinho told reporters.

“If it’s me, telling that player A, B or C from another club, if it was my son I wouldn’t give him dinner tonight, what would be the reaction of that? It’s very, very sad.

“In relation to that, I just want to say that Sonny is very lucky that his father is a better person than Ole. I am a father. I think as a father you have always to feed your kids.

“Doesn’t matter what they do. If you have to steal to feed your kids, you steal. I’m very, very disappointed.”

Tottenham have now conceded 18 points from winning positions this season and with seven games remaining are in seventh spot, six points behind fourth-placed West Ham United.

Reminded of that damaging statistic, Mourinho said: “It’s a compliment to me in the way we start matches, the way we are organised. Then what happens during matches to lose points from winning positions is one of the situations I am not comfortable with talking to the media anymore.”

On Monday, Spurs condemned the “abhorrent” racial abuse of Son on social media.\

“Another matchday and more abhorrent racial abuse suffered by one of our players,” Spurs tweeted https://twitter.com/SpursOfficial/status/1381328170570428416.

“This has again been reported to the platforms and we shall now undertake a full review alongside the Premier League to determine the most effective action moving forward.

“We stand with you, Sonny.”

Son’s team mate Davinson Sanchez has also been subjected to online abuse, while a host of players at other Premier League clubs have been targetted including Manchester United trio Anthony Martial, Axel Tuanzebe and Marcus Rashford, and Chelsea’s Reece James.

With English football bodies piling pressure on social media companies to tackle the issue, Instagram has announced measures and Twitter vowed to continue its efforts after taking action on more than 700 cases of abuse related to soccer in Britain in 2019.

Spurs manager Jose Mourinho said last week the club want to make an impact in the fight against online racist abuse and may join other teams in a boycott of social media.