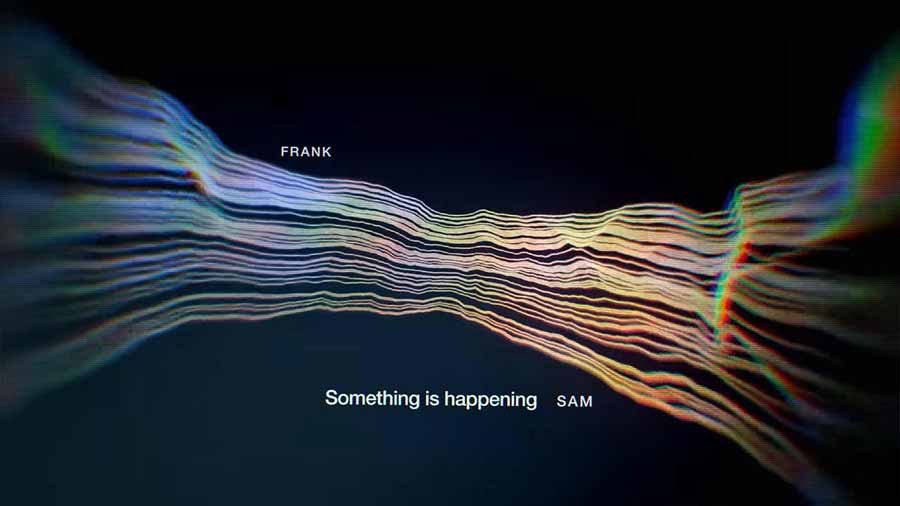 Slapping the word “experimental” in front of anything always makes me think of China, in that it is a huge red flag. Sure, sometimes it works, and the result is amazing but let’s face it, most of the time it doesn’t. An ‘experimental dish’ usually means that someone decided that marshmallows could be paired with a steak and ‘experimental theatre’ probably means that you are about to watch someone on stage present a monologue on blankets while doing a handstand.

But every now and then, it just works.

New Apple+ show Calls is one of those cases. Promoted as an ‘experimental thriller’, this show delivers both on the ‘experimental’ and ‘thriller’ part.

On the experimental front, Calls unfolds almost exclusively using audio, where the viewer listens in on phone conversations between the protagonists. It consists of nine episodes, 15-20 minutes long with the only visual element some minimal on screen graphics along with the names of the characters.

Don’t let the audio only part fool you, as this show needs no jump-scares to be horrifying.

The show alternates between casual conversation to cosmic mystery, complex physics and absolute horror with ease, gluing audiences to their screens, itching to know what is coming next. Using a popular TV trope, the first episode is chronologically the last while the rest of them serve as an explanation on how we got there. Each episode is an immersive, standalone narrative, used to lay out the major arc, containing one more piece of information that will help the audience piece together the entire story.

From a casual break up over the phone, to a man driving in the desert for far longer than he thinks, to an internet prank and the seemingly innocent task of retrieving a duffel bag, each Calls episode is a manic race to the final answer. Helped by the limited runtime, “Calls” never breaks pace and demands the full attention of the TV audience.

The visualiser, the only graphic element on the screen, goes a long way to helping the story develop. Playing with colours to depict mood and relay urgency, the visualiser acts as a virtual map to guide the audience through each episode, creating for the first time a sensory experience for TV that depends almost exclusively on audio.

Calls also boasts a star-studded cast! Aaron Taylor-Johnson, Rosario Dawson, Mark Duplass, Aubrey Plaza, Nick Jonas, Stephen Lang, Judy Greer, even Pedro Pascal, fresh out of his mega-successful Star Wars series The Mandalorian,’ and more lend their voices to this project. These A-listers, despite doing a show that only has them do voice overs, are not phoning it in (I’m not even sorry about that one) and add even more layers to the audience immersion.

And if by this time you are saying to yourself ‘wait a minute, this is a podcast!’, you’d be right. Calls did receive criticism from reviewers who were left baffled as to why this project made it to TV and not podcast platform Spotify. I do not mind and if Calls’ success means originality-starved Hollywood is now scouring through the many amazing audio drama podcasts to find new material, that is fine by me.

This is how the show was actually picked up, since series creator Timothée Hochet originally conceived this as a 10-minute video for his YouTube channel, keeping the audio only format. The idea was picked up by French studio CanalPlus and made into a series for France, which was then picked up by Apple, which hired director Fede Alvarez (Evil Dead) as a showrunner.

Despite the criticism, Calls is turning into a sleeper hit. It is only a matter of time before one of the big production studios turn this novel idea into a fully-fledged TV series, so watch it now and claim your future watercooler bragging rights, by being the obnoxious guy who was always “into that way before it went mainstream”.

Coronavirus: Easter likely to be a quiet affair