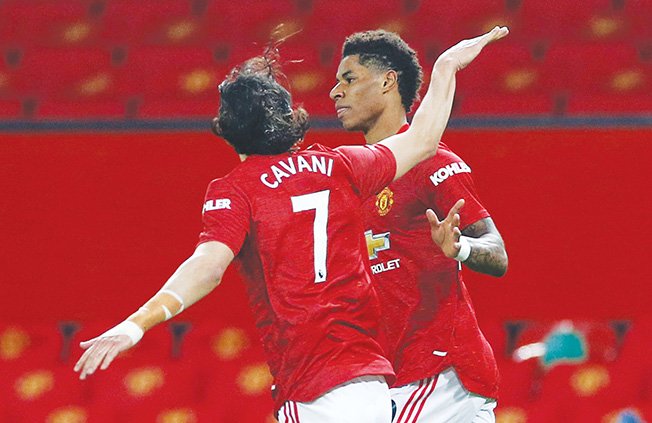 Ole Gunnar Solskjaer says Manchester United’s patchy home form is partly down to the fact his players were unable to see each other clearly due to the red stadium wrap at Old Trafford.

Tuesday marked 25 years to the day since Sir Alex Ferguson famously ordered his players to change from their grey kit to a blue-and-white strip midway through a 3-1 loss at Southampton.

Solskjaer joined United the season after the Dell debacle and raised the issue of spotting players ahead of Thursday’s Europa League quarter-final second leg against Granada at an empty Old Trafford.

All four of this season’s Premier League defeats have come at home, while they suffered a key Champions League group loss to Paris St Germain there, along with the Carabao Cup semi-final defeat to Manchester City.

When that record was put to Solskjaer along with the fact United have yet to win a home Europa League game despite triumphing at Real Sociedad, AC Milan and Granada without conceding, he said: “You’ll see a change now.

“If you see the banners round the club, it’s not red anymore. We’ve looked into this.

“There shouldn’t be any reason, really, but some of the players have mentioned that you know that split-second decision that you have to make, look over your shoulder if your team-mate’s there or not and the red shirt is on a red background just with the red seats.

“So we’ve of course tried to change that along with an anti-racism campaign so of course that was important that it wasn’t red anymore.

“Then again, there shouldn’t be any reason. But then again, if you’ve got a 4-0 advantage (like we did against Sociedad) you don’t really have to win that game. Nil-nil was a good result.

“Then the first game against Milan that’s still a draw, we conceded in the last minute.

“I still think we played some good football at home. We started off badly with the three defeats, with Palace, Tottenham and Arsenal very early on, so we’ve improved.”

United replaced the red stadium wrap with black banners at the start of April, which read ‘United Against Racism’ as part of the club’s See Red anti-racism campaign.