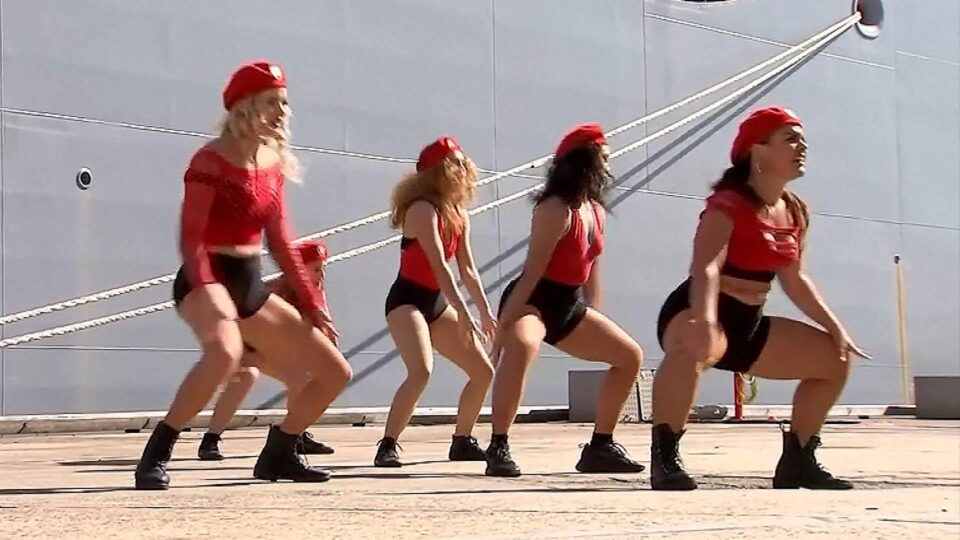 Still from the video

A dance troupe’s performance at an Australian navy event created a furore on Thursday as initial criticism over apparent twerking at dignitaries turned into a story of inaccurate media coverage and criticism of the national broadcaster by the prime minister.

The Defence Department found itself in hot water over reports of inappropriate entertainment at the commissioning of a A$2 billion ($1.5 billion) naval ship in Sydney last weekend.

A seven-woman troupe dressed in black shorts, red crop tops and berets performed a dance routine that included twerking in front of the auxiliary vessel, HMAS Supply, on April 10, according to footage shown by the Australian Broadcasting Corp (ABC) on Wednesday.

Video of the performance by the 101 Doll Squadron prompted criticism that it was too risque for a formal occasion.

The ABC report cut between shots showing the dancers and a crowd of dignitaries including Governor-General David Hurley, Queen Elizabeth’s representative in Australia. However, Hurley had not arrived at the time of the routine, a spokesman for the Australian Defence Force said.

The dance troupe, which the ADF said was hired as part of its engagement with the local community, were critical of the ABC, saying the report was “deceptive” and they were hurt and disappointed by their portrayal and resulting controversy.

“The media which purports to support women have been the most virulent,” the troupe said in a statement.

Prime Minister Scott Morrison said he was disappointed over the “misreporting” that had misled people.

“I think that was disrespectful to the performers to suggest te Governor-General or others were in attendance,” he said at a news conference in Perth.

In a statement, the ABC said it had updated its footage to reflect the fact that the Governor-General and Chief of Navy were not in attendance for the dance routine, and apologised to its viewers and both men for the error.

Coronavirus: Half of children and teens showing signs of ‘lockdown loneliness’

Chocolate-covered cicadas a hit in Maryland

Lockdown getting you down, start screaming