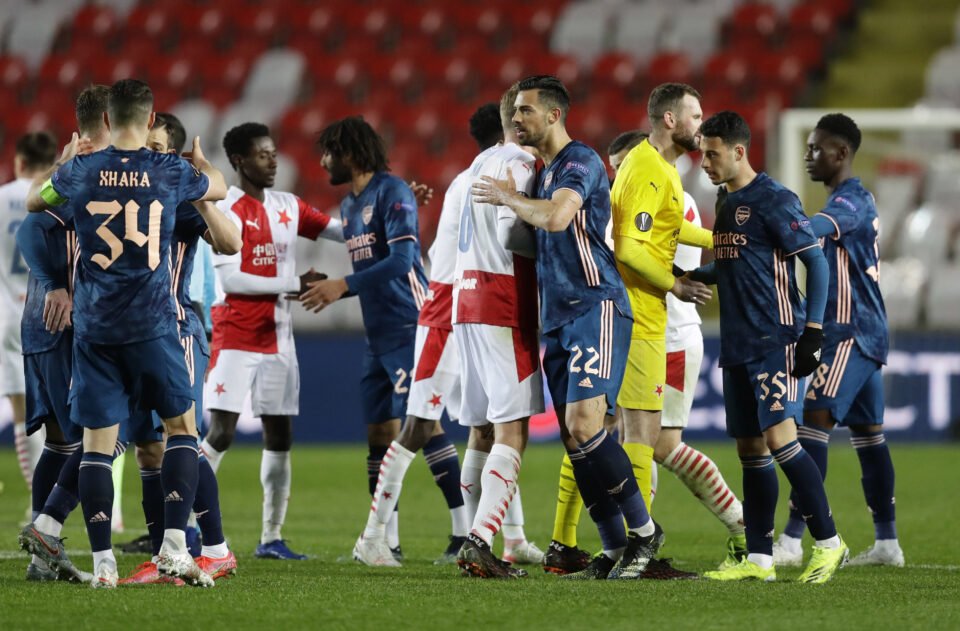 Arsenal cruised past Slavia Prague 4-0 to book a Europa League semi-final spot on Thursday with three quick-fire goals in seven first-half minutes to advance 5-1 on aggregate.

Alexandre Lacazette struck twice, including a penalty, while Nicolas Pepe and Bukayo Saka also found the net in the quarter-final second leg to set up a last-four clash with Villarreal.

Arsenal, who were surprisingly held to a 1-1 home draw by the Czech champions, signalled their intent from the start as they pressed forward to create chances while Slavia struggled to move the ball out of their own half.

The visitors opened the scoring in the 18th minute when Pepe drove a shot home after a pass from Emile Smith-Rowe, who had a goal disallowed for offside minutes earlier after a VAR review.

Lacazette then coolly slotted home a spot-kick in the 21st minute Czech midfielder had bundled over Saka. Arsenal struck again three minutes later when Saka cut inside his defender and fired a low shot past keeper Ondrej Kolar.

Lacazette netted his second of the night in the 77th minute when he latched onto Pepe’s cross before jinking away from two defenders to create some space to beat the Czech keeper.

Arsenal, who ended Slavia’s 21-match unbeaten streak at home in all competitions this season, face their former manager Unai Emery’s Villarreal in the semi-finals.

Meanwhile, Manchester United reached the Europa League semi-finals after Edinson Cavani’s early strike and a Jesus Vallejo own goal secured a 2-0 home win over Granada on Thursday and completed a 4-0 aggregate rout of the Spanish side.

United will face AS Roma for a place in the May 26 final in Gdansk after the Italian side ground out a 3-2 aggregate win over Ajax Amsterdam with a 1-1 home draw in the second leg of their quarter-final.

Cavani netted his 50th goal in European competition with a clinical sixth-minute finish as United made a bright start.

Granada came to life after falling behind and their forward Yangel Herrera twice headed inches wide as the home side appeared content to sit back.

Bruno Fernandes fired narrowly over the bar for United with a rasping first-time volley in the 34th minute and Cavani headed wide of the far post before Vallejo scored at the wrong end of the pitch in the 90th minute.

Alex Telles swung in a cross from the left and Vallejo gave his own goalkeeper Rui Silva no chance with a misdirected header which ended up in the bottom corner.

Coronavirus: Half of children and teens showing signs of ‘lockdown loneliness’

Our View: A sad reflection on the lengths parties prepared to go for votes