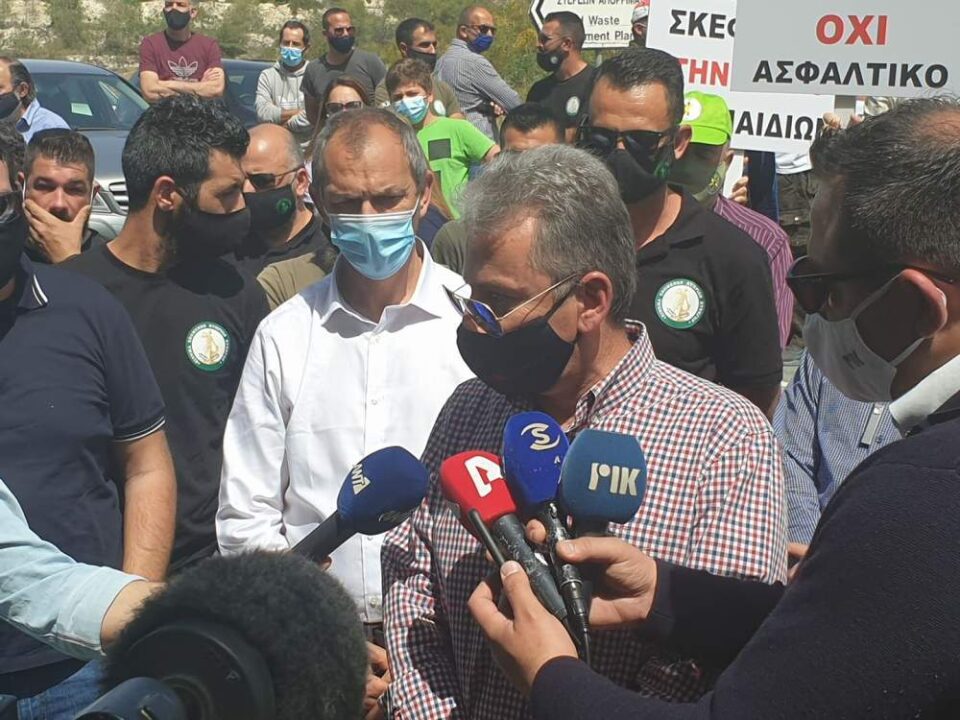 Scores of people from Aradippou and Larnaca held a protest on Saturday against the planned relocation of an asphalt plant from Dali to the nearby Koshi area.

The protest started with a convoy of cars heading towards the Koshi waste management unit on Saturday morning which caused a traffic jam for a while at the Rizoelia roundabout.

People holding placards saying, ‘No to the Koshi asphalt plant’, and ‘Think of children’s health’ gathered near the memorial for the fallen UN members. The mayors of Aradippou, and Larnaca and the community leader of Lymbia were also present.

The event was organised by the committee ‘No to the Koshi-Aradippou asphalt plant’. The group says that the Koshi area, which is already burdened by the waste management unit, and the storage of EAC wooden electricity poles that are permeated with toxic substances (creosote) cannot handle another source of pollution.

They argue that the asphalt plants the government wants to have relocated to their area will emit carcinogenic pollutants daily which will be transported through the air and further deteriorate the air quality of residents living nearby.

The government has decided to relocate two asphalt plants presently sited in the Dhali area following strong protests from residents there, but it is having problems finding suitable locations because of objections from residents living near likely new sites.

Ermis Christodoulou, said on behalf of the organisers that three municipalities and nine communities near the Koshi area were against this move. He said though they were in favour of the plants being relocated from Dhali because residents were also entitled to a better quality of life, they did not want them in their area.

Bruno Fernandes can do everything, except defending, says Pogba