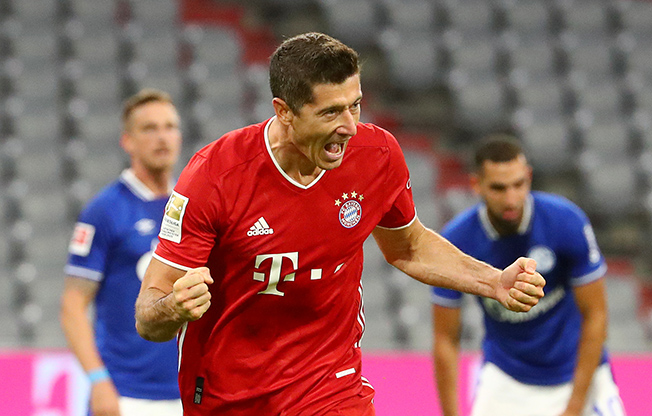 Bayern Munich striker Robert Lewandowski is back from injury and will be part of their squad when they take on Mainz 05 on Saturday, with the Bundesliga title only a victory away, coach Hansi Flick said.

Lewandowski, who has netted 35 times in the league this season, is hoping to hit the ground running in the last four matches as he chases Gerd Mueller’s all-time Bundesliga record of 40 goals in one season in 1971/72.

For Flick, however, securing their ninth consecutive league crown on Saturday is the top priority. Bayern are in top spot on 71 points, 10 ahead of second-placed RB Leipzig.

“We have to win the title as soon as possible. That is our first focus,” Flick told an online news conference on Friday.

“He (Lewandowski) has been missing injured for four weeks but he is good physically and he has shown that in training. He is back in the squad.”

“We have to see how he handles it and how his body reacts. We will support him (in his record attempt) but the first focus is the success of the club,” he said.

Flick will also have winger Serge Gnabry and midfielder Leon Goretzka back from injury.

The Bavarians won six trophies in the 2019/20 season under Flick, who wants to leave at the end of the current campaign despite having a contract until 2023. Winning his second straight league crown on Saturday would cap a remarkable 18 months for the coach.

“We hope to clinch the title in Mainz but they have not lost the last six matches. They won in Bremen (on Wednesday) and look almost safe (from relegation) with 31 points. So maybe they will play a bit freer.”

“The Bundesliga is the basis for playing in the Champions League, to compete for the Club World Cup or European Super Cup,” Flick said. “For that to happen normally you have to win the title. The demand at Bayern is to be champions.”

As for celebrations, Flick said they would need to be put on ice due to the pandemic.

“We won’t be doing anything. We will be going home,” Flick said. “What should we do in the current circumstances? We want to win the title and whatever comes afterward there has to be some degree of spontaneity.”