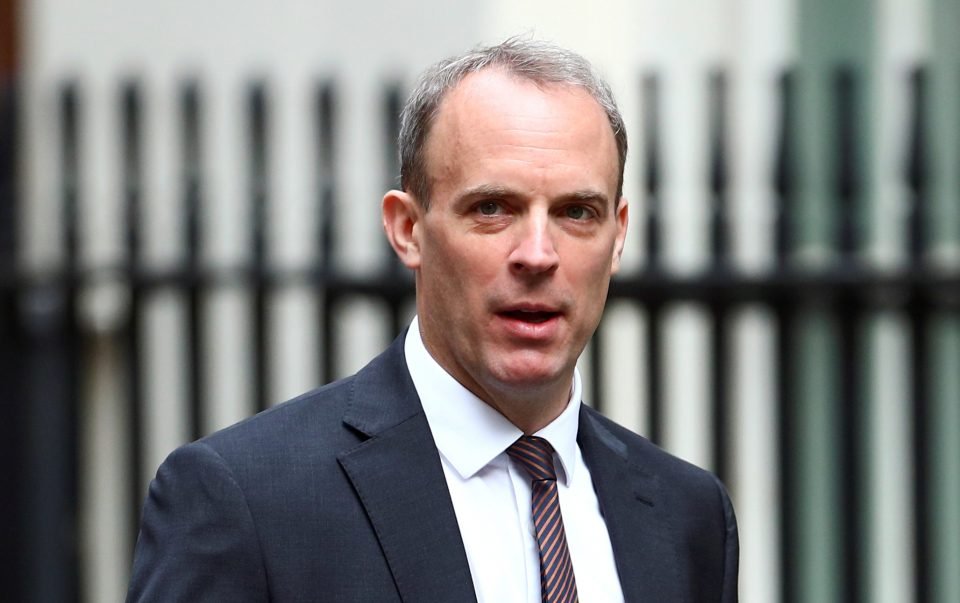 UK Foreign Secretary Dominic Raab, who will today be attending talks hosted by the UN in Geneva aimed at restarting formal negotiations for a solution to the Cyprus issue, has called upon all parties to show “creativity and flexibility”.

Announcing Raab’s attendance of the ‘5+UN’ talks, which will also be attended by the leaders of the Greek Cypriots, the Turkish Cypriots and the Foreign Ministers of the other two guarantor powers (Greece and Turkey), the Foreign Office noted that this was “a key opportunity for parties to move the process forward.”

The British Foreign Secretary will reaffirm the UK’s support of a comprehensive, just and lasting resolution of the Cyprus problem.  He will underline the potential of a reunited Cyprus, which include greater opportunities on trade, investment and tourism, as well as bolstering security and stability in the region.

Ahead of his departure for Geneva, Raab said: “These talks offer an opportunity to restart negotiations aimed at delivering a fair and lasting solution to the Cyprus issue, and we hope that all parties approach them with creativity and flexibility.”

The Foreign Office also stated that the UK is a strong supporter of a comprehensive, just and lasting settlement of the Cyprus issue which remains key to resolving wider tensions in the region.

Meanwhile, citing sources the Cyprus News Agency reported from Geneva that President Nicos Anastasiades will express positions based on the National Council decisions, the UN resolutions, the High-Level agreements, the ECHR rulings, as well as arguments related to the issue of Famagusta at the 5+1 informal meeting.

According to the sources, the Greek Cypriot side will participate in the informal meeting with clear positions taking into consideration all the above and supporting a bi-zonal, bi-communal federation with political equality.

During the bilateral meetings which the UN Secretary General Antonio Guterres will have on Tuesday with President Anastasiades and Turkish Cypriot leader Ersin Tatar, the two sides will express their positions. However, what is more important are the meetings that will take place on Wednesday, both bilateral and trilateral ones, the sources noted.

They underlined the substantive role which the UNSG can play, as he could undertake initiatives that would lead to substantive negotiations.

According to the sources, Greek Cypriot negotiator Andreas Mavroyiannis had on Monday afternoon in Geneva a meeting with the UNSG’s special envoy on Cyprus, Jane Holl Lute, to discuss procedural issues.

Anastasiades informed on Monday evening the members of the National Council about the positions he will express during his meeting with the UNSG on Tuesday.

The issue of a de-centralized federation came up during the meeting with President Anastasiades expressing his position on it. The legal experts escorting him in Geneva, the sources said, will elaborate on this in more detail if the members of the National Council want more clarifications.

The same sources said that if the issue of the de-centralized federation comes up during the informal meeting, President Anastasiades is ready to express his positions and arguments.

The President will highlight during his meetings the statement made in Berlin in November 2019 as well the letters sent by the UNSG, especially that of last October, in which Guterres referred to the resumption of the talks and their base, as well as to the work that has already been done, the sources added.

With regard to the people who will accompany Anastasiades at the informal meeting, the source said that when he will be accompanied by four of his aides — negotiator Mavroyiannis, the Director of the President’s Diplomatic Office, Kyriacos Kouros, Pantelis Pantelides and Adrianos Kyriakides.  If a fifth person will accompany him this will be chosen according to the issues to be discussed.

A guide to camping with your pets