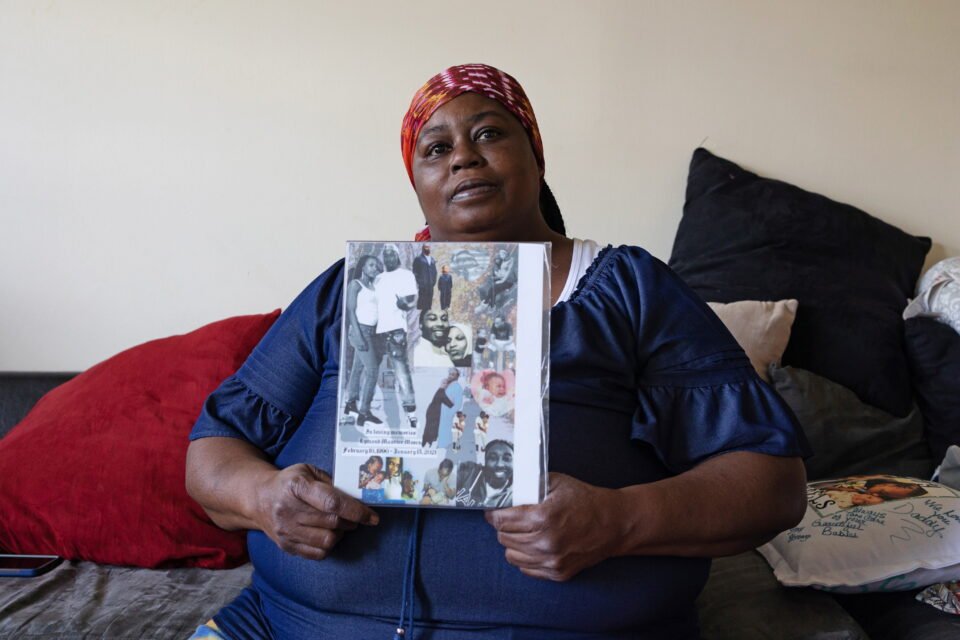 Rozzlie Moses, mother of Lymond Moses, who was shot and killed by police

The sister of a Black man shot to death by Delaware police in January sued the officers on Wednesday, saying her brother’s death was not justified and another example of unnecessary deadly force by white police against Black citizens.

Lymond Moses, 30, was killed around 1 a.m. on Jan. 13 in Wilmington during an encounter with three New Castle County police officers, two of whom fired into his car nine times, with the fatal shot striking his head, according to the death certificate.

Several hours after the shooting, the police department issued a press release which stated that Moses fled the officers in his car, hit a dead end, made a U-turn “and drove at a high rate of speed directly at the officers. The officers subsequently discharged their firearms and struck the driver.”

After pressure from the family and civil rights groups, the police department was ordered in March by Matt Meyer, the New Castle County Executive, to release video footage from all three officers’ body cameras.

According to the footage, the officers, who were out on patrol looking for stolen vehicles, found Moses asleep in his car with the engine running, woke him up and asked him to exit the vehicle.

When they told him they were looking for stolen cars, Moses replied that his car was not stolen, the video showed. After finding marijuana in his car, and telling him the marijuana was not a problem, they asked him several times to “hop out.” Moses instead drove off. As he did, an officer shouted “motherfucker”.

The subsequent footage contradicts the press release, the family and the American Civil Liberties Union (ACLU) of Delaware say. They say it is clear from the video that Moses drove around the officers as he was trying to flee, and was fired on as he passed and then drove away from them.

“It’s just wrong, how they killed my son,” Moses’s mother, Rozzlie Moses, 50, told Reuters. She said the police “over murdered my son,” who was himself the father of three children, aged 10 years, 9 years, and six months.

At least one expert on police use of force interviewed by Reuters said the footage itself didn’t prove the allegations that the police shooting was not justified, however.

According to the lawsuit, which also targets the police department and New Castle County for the officers’ “excessive and unjustified” use of deadly force, none of the three “ever had a reasonable fear of imminent bodily harm.”

When the video was released, Lieutenant Brian Faulkner of the New Castle County Police Department, said: “Based upon this video, we cannot draw any conclusions as to whether the officers acted within policy and the law, until all the facts are known, and the investigation is complete.”

The county executive did not respond to requests for comment.

The two officers, who have not been named, are 10-year and 3-year veterans of the force and have been placed on administrative leave.

A spokesman for the Delaware Attorney General, who is conducting an investigation into the shooting, said their names will not be released until the probe is complete.

The executive director of ACLU Delaware, Mike Brickner, who has reviewed the bodycam footage, said: “As he was driving away he was very clearly avoiding the police officers. If you look at the two officers who fired, it appears they shot at him to stop him getting away.”

Brickner added: “It’s very different from what we were told in the original press release.”

Mike Leonesio, a former police officer and expert on the use of force by police, said the footage alone does not provide a clear-cut case for Moses’s family because it does not account for what the officers may have “reasonably” believed about the threat at the time.

Having reviewed the bodycam footage, it is possible officers believed their colleagues were in danger, which would justify the use of force, said Leonesio, who has no connection to the case.

“The videos, while sensational, don’t answer whether the shooting was objectively reasonable – the legal standard and ultimate question – without more information,” he said in the interview with Reuters.

He cited a 1989 U.S. Supreme Court decision, which says: “The calculus of reasonableness must embody allowance for the fact that police officers are often forced to make split-second judgments, in circumstances that are tense, uncertain, and rapidly evolving, about the amount of force that is necessary in a particular situation.”

The ACLU’s Brickner said the release of bodycam footage was extremely rare in Delaware, pointing to state law which allows police forces to not publicly release evidence when officers shoot and kill a member of the public.

Brickner said the disconnect between the initial press release by the New Castle County police department and what the bodycam footage showed is similar to what happened in the case of George Floyd, who died last May at the hands of former Minneapolis police officer Derek Chauvin. The original police press release in that case said Floyd died after a “medical incident.” Chauvin was convicted last week of Floyd’s murder.