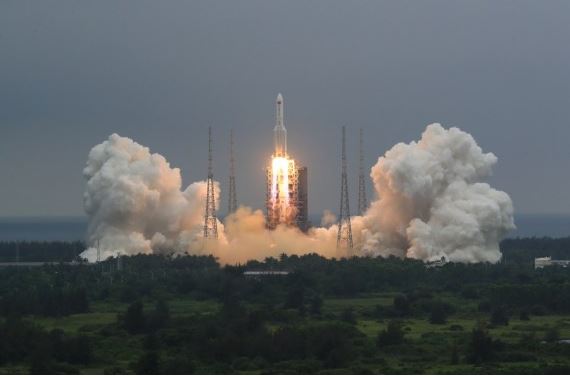 China has launched the core module of its space station.

China on Thursday sent into space the core module of its space station, kicking off a series of key launch missions that aim to complete the construction of the station by the end of next year.

The Tianhe module will act as the management and control hub of the space station Tiangong, meaning Heavenly Palace, with a node that could dock with up to three spacecraft at a time for short stays, or two for long, said Bai Linhou, deputy chief designer of the space station at the China Academy of Space Technology (CAST), under the China Aerospace Science and Technology Corporation.

Tianhe has a total length of 16.6 meters, a maximum diameter of 4.2 meters and a takeoff mass of 22.5 tonnes, and is the largest spacecraft developed by China. China is building its first space programme, one that will compete with Europe, Russia and the US.

The space station will be a T shape with the core module at the center and a lab capsule on each side. Each module will be over 20 tonnes. When the station docks with both manned and cargo spacecraft, its weight could reach nearly 100 tonnes.

The station will operate in the low-Earth orbit at an altitude from 340 km to 450 km. It has a designed lifespan of 10 years, but experts believe it could last more than 15 years with appropriate maintenance and repairs.

“We will learn how to assemble, operate and maintain large spacecraft in orbit, and we aim to build Tiangong into a state-level space lab supporting the long stay of astronauts and large-scale scientific, technological and application experiments,” said Bai.

“The station is also expected to contribute to the peaceful development and utilization of space resources through international cooperation, as well as to enrich technologies and experience for China’s future explorations into deeper space,” Bai said.

Google has plenty of cash, but nowhere to go

Biden pleads for unity in speech to Congress