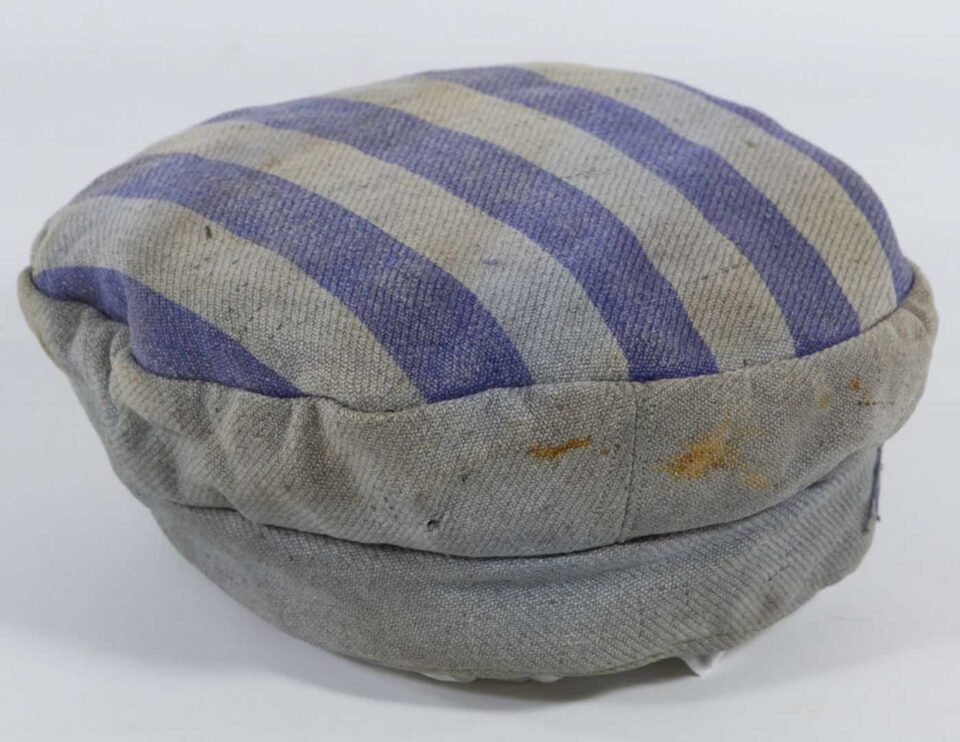 Coarse, stiff and eerie. That was my first impression of the pale, blue-and-white striped brimless cap that unsuspectingly appeared before me on a recent visit to the Jewish Museum of Cyprus. I had visited many Holocaust exhibitions in the past, spending hours examining the artefacts and relics displayed through protective sheets of glass; holding the timeworn artefact, from what is arguably the darkest chapter in the twentieth century, will stay in my memory forever.

To those unacquainted with the systematic, state-sponsored persecution and murder of six million Jews by the Nazi regime and its allies and collaborators during World War II, this fragment of a past life may seem uninteresting. At first glance, the unknowledgeable might overlook it as a torn bit of old fabric, used as a rag. However, this symbolic item of clothing represents the harsh treatment and murderous persecution of a race considered ‘inferior’ and a menace to the German Volk at the time. More importantly, it pays tribute to the memory of the victims of the Holocaust and reaffirms its commitment to counter antisemitism, racism, and other forms of intolerance.

I observed other relics in silence, resting on a wooden table before me a love letter written in Yiddish, posted to the ‘Promised Land’ from one of the 51,000 Holocaust survivors interned in British camps in Cyprus after fleeing Europe, and a collection of creased, black and white photos depicting life in the camps between 1945 and 1948. The blue-and-white striped cap, stained with dry blood, a prisoner number and the haunting word Auschwitz engraved on the inside, continued to tell the story of the many different people who lived through this dark chapter and the extent of the events that occurred.

“Our aim is to educate the people about the relationship between the Jewish Community and Cyprus, particularly the Cypriots who helped Holocaust refugees in the British Detention Camps,” says Rabbi Arie Zeev Raskin, the Chief Rabbi of Cyprus.

I met Rabbi Arie Zeev Raskin at the Jewish Community Centre in Larnaca. Aimed at bringing the Jewish community of Cyprus together through services and programmes that form part of Jewish life, the centre is also home to the town’s synagogue that is open to all, regardless of affiliation, knowledge of Hebrew and level of commitment.

“Cyprus constitutes a very important piece of the puzzle in the history bridging the end of the Holocaust and the foundation of Israel,” Rabbi Arie Zeev Raskin says. “2,200 children were born to Jewish detainees at the British Military Hospital in Nicosia in the late 1940s,” he adds.

According to the rabbi, the camps were the grimmest of places. Jews who attempted to emigrate from war-torn Europe to Palestine, which was under British rule at the time, remained in the camps until the State of Israel was officially declared in 1948.  “They travelled on crowded ships from Europe and we re-routed and escorted back to Famagusta,” he explains. “It was ironic how the Jews who miraculously managed to survive Auschwitz ended up imprisoned in one of the British internment camps.”

Forced to live in prefabricated steel structures known as Nissen huts, the internees were exposed to sweltering heat and dreadfully cold winters. They endured a poor diet and basic sanitation. Jewish refugees owed their health and wellbeing to Cyprus and to righteous Cypriots who dug secret underground tunnels, smuggling in food and medical supplies, and in severe cases even doctors and nurses. “As such, Cyprus and Cypriots were responsible for helping to promote the re-birth of Jewish life, culture, religious observation and the Jewish heritage throughout the world,” Rabbi Arie Zeev Raskin says.

Adjacent to the community centre, the Jewish Museum of Cyprus features rare artefacts and items of historical significance, including an original Nissen hut, a remnant of World War II. A new, modernised building is planned to be constructed in its place that will house all these items, including virtual reality exhibits, and help promote awareness of how Jewish people and Israel are important contributors to culture, education, science and the arts.

In a world where work and personal life are often rushed and mashed together in a blur of activity, often caught up in a desire to have what we want when we want it, a pale, blue-and-white striped brimless cap, stained with dry blood, made me realise that pausing to reflect is not a privilege, it is an absolute must. An item of clothing can tell the story of struggle, hardship, torment and liberation. More importantly, it revealed how my Cypriot ancestors played a significant part in changing the lives of many, by contributing to the life of future generations.