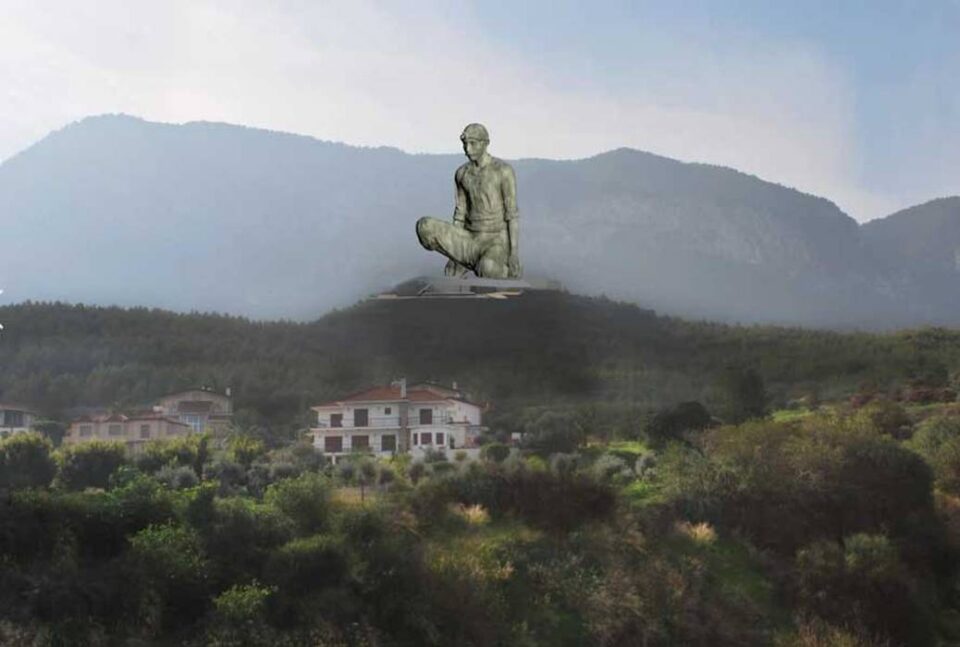 The reason the Noble Peasant got coverage was because when you look at the picture, posted on the project website, you get the impression that the Cypriot horkatos has the biggest ding-dong in the world

THERE is an expression that officials use to highlight the lunacy of executive decisions that are provisional, as a way of reassuring affected parties that asserts “nothing is more permanent than the temporary.” So, if you get a temporary permit to use state land as an extension to your house garden it is most likely to be forever.

This surrealist saying came to mind the other day, hearing the health minister of our provisional police state, Constantinos Ioannou, offer assurances that the corona-pass would be ‘temporary’. He did, after all, avoid giving any indication of how many weeks, months or years this temporary measure, by which we would require to have covid certification to go to a restaurant, café, gym, church or public toilet would last. (Is it because brothels are supposedly illegal that they are never mentioned in the decrees?)

Temporarily, we will need a certificate that we have been vaccinated at least once, three weeks earlier, tested negative in the last 72 hours, or had been infected in the last six months to go for a meal. All indications are that the corona pass will be as temporary as the wearing of face-masks outdoors which has become a permanent part of life since last July, with nobody even complaining.

It suffices to say that a corona pass digital app is being prepared, so we could have the certificate of our eligibility to go to church on our mobile phone. What more proof were needed that that the pass will be a temporary measure?

WE MUSTN’T moan too much about the temporary corona pass because it also has positive effects. It has released us from house arrest and ended the insufferable SMS system, replacing it with a slightly more liberal form of repression.

At least now we can leave home whenever we like, roam the streets freely until 11pm, go for walks, lie on the beach. The unvaccinated will be slightly inconvenienced because they would have to go for a rapid test before meeting someone in a café, but at least they can go to the café.

The corona pass could turn out to be bearable if there is no enforcement and the police state relies on people following the rules, but I doubt this will be the case given the way we have been treated like naughty kids in the last year.

The authorities have not demanded that restaurants, cafes and bars demand to be shown the pass before allowing customers in, so we can deduce there will be inspectors visiting these establishments to check on the customers. Having an ugly cop ruining your dinner by appearing at your table and demanding to see your corona pass is something we can all look forward to as part of the government’s promised lifting of the Covid restrictions. The question is what would the cops do when they catch someone eating without a pass? Would they handcuff them and escort them out of the premises, even if they are in the middle of eating their meal?

A WOMAN, who went for her second vaccination on Saturday was in for a surprise. She was told by the nurse at the vaccination centre that she would still need to have a rapid test to go to work in the next two weeks.

These were the instructions from the health ministry she was told and being a law-abiding citizen, after her vaccination, she went and had a rapid test. She explained her situation at the rapid test centre and again she was told that despite having the second vaccine she would still need negative test to go to work, because these were the orders from the health ministry.

The health ministry has become so powerful it now overrules the decrees issued by the council of ministers, with its own unofficial decrees. I suspect it is just a temporary arrangement.

PICK ‘N’ MIX measures have become part of the police state’s policy. Tourists, whose money we desperately need will not be subject to the same restrictions as the natives. All they will require, according to deputy tourism minister Savvas Perdios, quoted in Phil, would be the Cyprus Flight Pass to move around freely, visit pubs, restaurants and cafes.

No vaccination, no rapid test and no proof of having had the virus necessary. They will be free to spread the virus among the natives because they are the paying customer. And not one of the Covid zealots that accuse us sceptics of putting money above public health, when we moan about the devastating effects of the restrictions on the economy, have thought it necessary to say something. This makes a mockery of the corona pass, but we need the moolah.

YOU HAD to laugh at the new role the auditor-general Odysseas has given himself – supervisor of state investigation. In his new role he issued an eight-page essay on the interim report issued by the investigative committee looking into the golden passports scheme, because “it raised important issued on which it would be useful to express our views.”

The self-glorification message of Odysseas’ essay was that his investigation had been helpful to the committee, that the issues his own investigation had raised were confirmed by the committee, that criticism by the government was unjustified and that he had been vindicated. He even suppressed his big ego for a few lines, to give his approval to the work of the committee, which “produced very important and worthwhile work.”  If this was the case, why had he shown zero trust in it to start with and insisted on carrying out his own investigation in parallel? Because he is Odysseas and does whatever he wants.

ODYSSEAS, in his 3,000 word self-glorification, had a couple of digs at the finance minister Constantinos Petrides, who as interior minister sped up the citizenship procedure of 18 persons related to the casino and nine relatives. He does not like Petrides because the minister has stood up to him a few times.

This was why he ignored the investigative committee’s assertion that as soon as Petrides took over as interior minister he undertook to learn how the scheme worked and “promoted significant amendments that introduced, at least belatedly, safety valves to the programme.”  While he was in charge, “the interior ministry gained access to the Worldcheck database and in addition an agreement was made with three companies that now carry out due diligence of applicants.”

He was the only member of the government to get a positive mention by the committee, which did not go down well with its supervisor.

THE GENEVA conference could not have gone better for Prez Nik. Not only did it do away with the danger of having to engage in negotiations, it also banished the prospect of sharing power with the Turkish Cypriots by removing federation from the table. Most importantly though, the Turks could be exclusively blamed for the deadlock by demanding talks on a two-state solution.

Nik is on course to achieve his secret objective without taking any of the blame for it. The only snag is that the Turks are hitting back, foreign minister Cavusoglu leaking to the Turkish press the content of the conversation he had with Nik in Geneva in the presence of the UNSG. Cav repeated the lie that Nik had told him in Crans-Montana that partition was preferable to federation because the Greek Cypriots (not Nik) were not prepared to share power with Turkish Cypriots.

At least the Greek Cypriots know that it is lie and our Prez’s commitment to a loose federation with a little political equality is unshakeable.

THE PLANS of Turkish Cypriot moneybags Erbil Arkin, to build a giant statue, of what he describes as the ‘Noble Peasant’ (evgenis horkatos in Greek), on the mountain overlooking Kyrenia harbour received coverage in the UK, on the popular television show Good Morning Britain. The Noble Peasant (is this a contradiction in terms?) will be 40 metres tall, higher than Brazil’s Christ the Redeemer.

The reason the Noble Peasant got coverage was because when you look at the picture, posted on the project website, you get the impression that the Cypriot horkatos has the biggest ding-dong in the world, which could boost tourist arrivals. It is in fact his knee that is sticking out because the peasant is kneeling, but it does look like a super-giant ding-dong.

There were all types jokes on the GMB. “Cyprus plans to erect statue,” said one presenter while someone tweeted “Is that your knee or are you just pleased to see me?”

A CUSTOMER sent a prophetic quote by the author of Brave New World, Aldous Huxley, who died more than 50 years ago but could have been talking about today. “There will be in the next generation or so a pharmacological method of making people love their servitude and producing dictatorship without tears, so to speak, producing a kind of painless concentration camp for entire societies so that people will in fact have their liberties taken away from them but will rather enjoy it.” But not to worry, because as our health minister made very clear, this is temporary.

Squaring the political circle in Cyprus