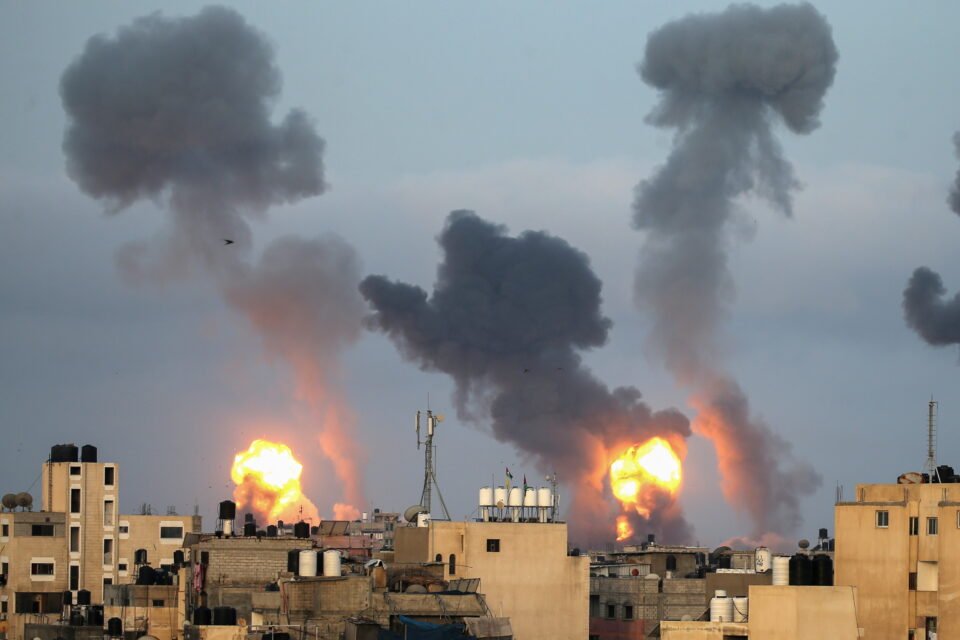 Flames and smoke rise during Israeli air strikes amid a flare-up of Israel-Palestinian violence, in the southern Gaza Strip May 11, 2021. REUTERS/Ibraheem Abu Mustafa

By Nidal al-Mughrabi and Jeffrey Heller

Hostilities between Israel and the Palestinian Islamist group that runs Gaza escalated on Tuesday as each side attacked the other with aerial bombardments that recalled their last major conflict in 2014.

A 13-story residential block in Gaza collapsed after one of several dozen Israeli air strikes, albeit after an Israeli warning, as Israelis reported explosions and sirens more than 70 km (45 miles) up the coast from Gaza. Thirty-one people were reported dead: 28 in Gaza and three in Israel.

Late into the night, Gazans reported their homes shaking and the sky lighting up with near-constant Israeli strikes.

The fighting between Israel and Gaza’s armed factions was triggered by clashes between Palestinians and Israeli police at Jerusalem’s al-Aqsa Mosque on Monday.

Even before a barrage sent in retaliation for the destruction of the tower block, which contained a civilian Hamas office, Israel reported that 480 rockets had been fired across the border by Palestinian militant groups, sending entire Israeli communities running to air raid shelters.

The White House condemned the rocket attacks, and said Israel had a legitimate right to defend itself, but that the primary U.S. focus was on de-escalation.

The International Committee of the Red Cross urged all sides to step back, and reminded them of the requirement in international law to try to avoid civilian casualties.

Israeli Prime Minister Benjamin Netanyahu said he would step up the strength and frequency of strikes on Gaza, an enclave of 2 million people, in response to the rocket attacks.

Israel said it had sent 80 jets to bomb Gaza, and dispatched infantry and armour to reinforce the tanks already gathered on the border, evoking memories of the last Israeli ground incursion into Gaza to stop rocket attacks, in 2014.

More than 2,100 Gazans were killed in the seven-week war that followed, according to the Gaza health ministry, along with 73 Israelis, and thousands of homes in Gaza were razed.

Video footage on Tuesday showed three plumes of thick, black smoke rising from the Gaza block as it toppled over. Electricity in the surrounding area went out.

Residents of the block and the surrounding area had been warned to evacuate the area around an hour before the air strike, according to witnesses, and there were no reports of casualties two hours after it collapsed.

Shortly after the attack, Hamas and the Islamic Jihad group said they would respond by firing rockets at Tel Aviv.

Air raid sirens and explosions were heard around the city, and the skies were lit up by the streaks of multiple interceptor missiles launched towards the incoming rockets.

Pedestrians ran for shelter, and diners streamed out of Tel Aviv restaurants while others flattened themselves on pavements as the sirens sounded.

After briefly halting all take-offs on Tuesday night over rocket fire by Palestinian militants in the Gaza Strip, the Israel Airports Authority resumed flights at around 10.30pm. The authority said it had halted take-offs at Tel Aviv airport “to allow defence of the nation’s skies”. Video broadcast on Israeli Channel 12 television showed interceptor missiles rising above the runways.

“We are now carrying out our promise,” Hamas’s armed wing said. “The Qassam Brigades are launching their biggest rocket strike against Tel Aviv and its suburbs, with 130 rockets, in response to the enemy’s targeting of residential towers.”

RAW FOOTAGE: This is the moment the Iron Dome intercepted a barrage of rockets over Tel Aviv and central Israel. pic.twitter.com/8jl8OTgWCl

Israel’s Magen David Adom ambulance service said a 50-year-old woman was killed when a rocket hit a building in the Tel Aviv suburb of Rishon Lezion, and that two women had been killed in rocket strikes on the southern city of Ashkelon.

But the Israeli military said many of the rockets fired from Gaza had fallen short and wounded Palestinians, and that Israel’s Iron Dome air defences had intercepted the bulk of those that made it across the border.

Jerusalem – holy to Jews, Muslims and Christians – has been tense during the Muslim fasting month of Ramadan, with the threat of a court ruling evicting Palestinians from homes claimed by Jewish settlers adding to the friction.

In the last few days that tension has exploded into violence at al-Aqsa Mosque, which stands in what Muslims call the Noble Sanctuary, and Jews the Temple Mount.

Coronavirus: Personal data commissioner says no problem to say if those dying were vaccinated