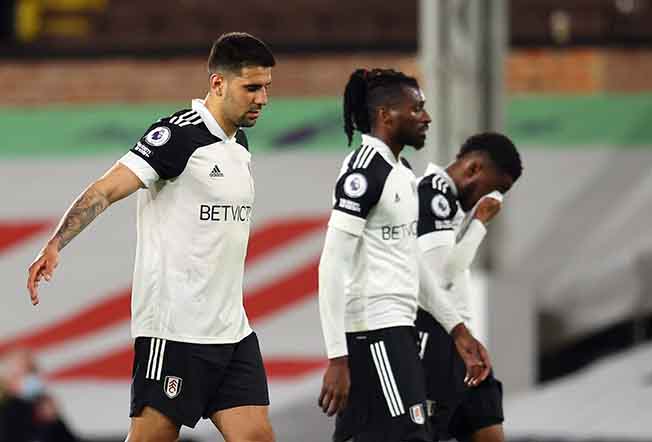 Fulham players look dejected after being relegated from the Premier League

Scott Parker admitted he and his Fulham players were “hurt and gutted” after being relegated from the Premier League following a 2-0 home defeat to Burnley.

The Cottagers went into the game needing a win to avoid the drop, but yet again struggled in the final third and were unable to find a breakthrough.

Ashley Westwood slid the ball home to give Burnley a first-half lead, with Chris Wood’s effort from distance following soon after as the Clarets secured their place in next season’s top flight.

Fulham knew they would have to surpass their great escape from relegation in 2007-08, in which they won their last three matches, but their 12th home league defeat of the campaign ensured they would be playing Sky Bet Championship football next season.

“I’m hurt and gutted, the players are (too),” Parker said.

“Everyone has tried everything possible, everyone at the football club has done everything in their power to try and stay in the Premier League this year.”

Fulham have managed just nine goals at home all season in the Premier League and Parker admitted the game reflected the season.

“If you’ve not watched us this year, and you watch that game tonight that has probably summed up our year really, very good at times between the boxes but just fallen short at both ends,” he added.

“I felt that was the same tonight really, two poor goals on our side and then for all our good play of getting it into them final moments it just lacked that little bit of quality to score a goal or to put the ball in the net really.

“Effort, I have nothing but full respect for what my players have given me this year in terms of endeavour, effort daily, wanting to improve and get better, but the facts are we’ve fallen a little bit short in our quality and that’s hence why we’ve been relegated out of this division.”

Burnley manager Sean Dyche admitted he had empathy for his counterpart.

“I don’t think any manager wants sympathy, I know a lot of managers now and most just want a bit of empathy and a bit of understanding,” Dyche said when asked if he had sympathy for Parker.

“It’s varying challenges and varying clubs. It’s very tough in the Premier League, I’ve been down that road myself, as you know.

“Our first season up we went back down and we had to come back up, it’s just tough.

“Of course empathy and understanding for it – I’ve been there – but there’s been a lot of good work at this football club and, beyond this, let’s see if they can go ahead again.

“There’s no glory by the way, teams that could go down, like tonight, there’s no glory in that I can assure you, there’s empathy and understanding but your job is to look after yourselves and we’ve done that.”