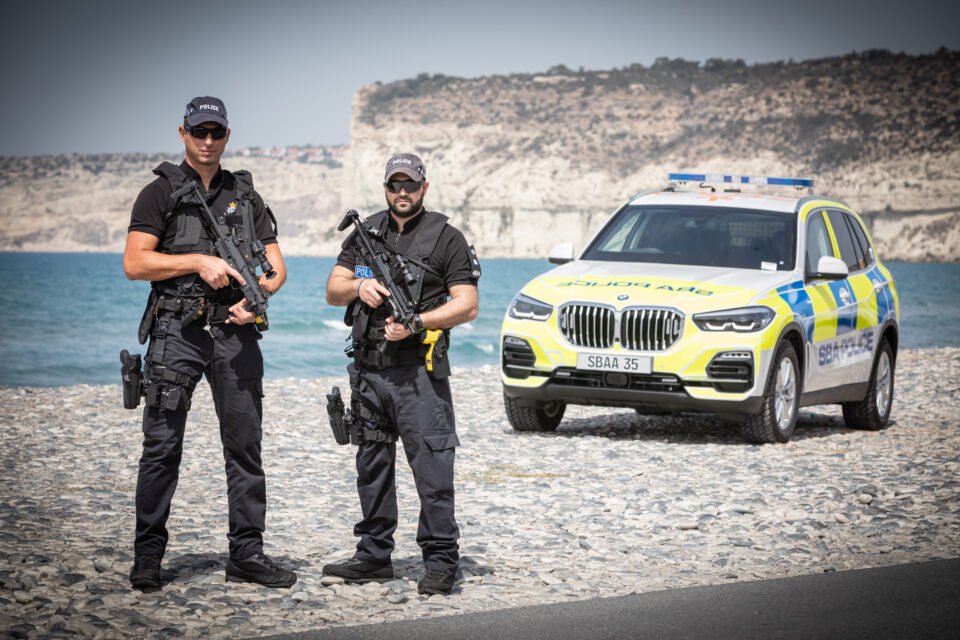 One of a fleet of new 4x4 BMW vehicles purchased by the Sovereign Base Area Police, at Curium beach with two fire arms officers.

The Sovereign Base Area Police has confirmed a huge capability upgrade after taking delivery of six new armoured vehicles, with a further one set to arrive before the end of May.

The new vehicles can be used by the force’s fully-trained armed police officers during regular patrols but will be deployed to what officials call ‘critical high-risk incidents’ when needed.

Trained officers have been able to carry firearms since 2006 and the delivery of the armoured vehicles has ensured both training and equipment are now fully aligned in the force.

Speaking shortly after taking delivery of the vehicles this week, Superintendent Mustafa Kemal, who is based at the SBA Police Headquarters in Episkopi, explained why this latest upgrade is so important to the police capability.

He said: “The purchase of the armed response vehicles is a hugely significant step forward for the SBA Police because not only does it offer more support and protection to the communities that we serve, but it of course also offers all of those things to our officers too.

“We ask our armed officers to put themselves in harm’s way during what could potentially be a life-threatening situation and now we know they are able to use these vehicles for their own protection should it ever be required.”

But despite the vehicle upgrade and the new capability, Superintendent Kemal was keen to stress they would not be kept in reserve in anticipation of a serious incident.

He continued: “Although the vehicles will be used by firearms officers, they will still be used for regular police work, undertaking patrols, community visits and anything else that our officers undertake when going about their day to day duties.

“The only difference is that we can call on them should a serious incident occur. I would also like to reassure our communities that the threat has not changed but that this is yet another demonstration that the SBA Police will be there to protect them if called upon to do so.”

Free potatoes and carnations as farmers plead for help