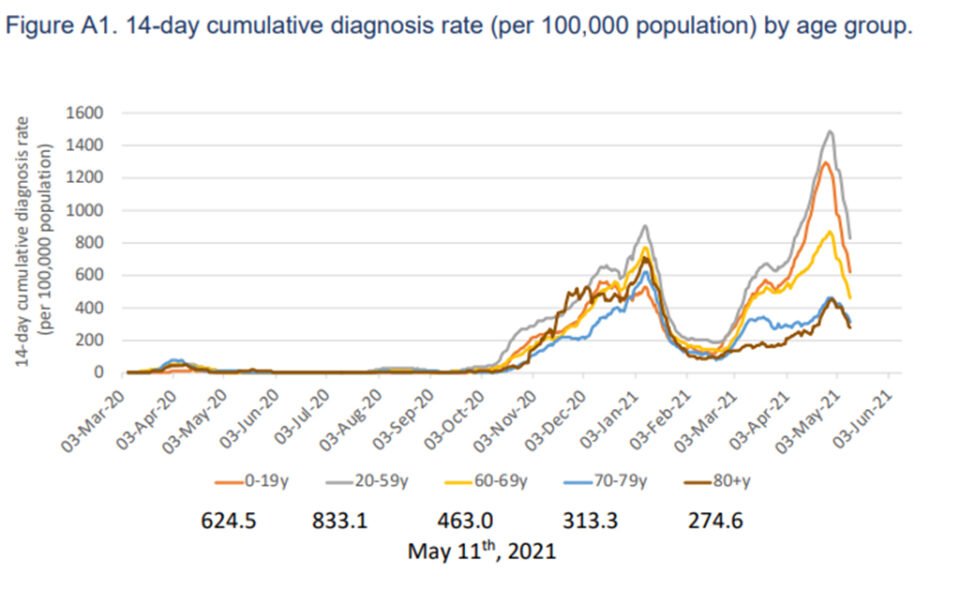 Cyprus’ positivity rate has dramatically reduced from about 1.2 per cent to 0.2 per cent, the weekly national report showed on Friday, and according to the health ministry that is due to a combination of lockdowns and vaccinations.

The ministry’s analysis of the data covers the two weeks up until May 11.

Across the board, the main epidemiological points of concern show improvement – such as the lower 14-day cumulative diagnosis rate, which now stands at 689 per 100,000, compared to 1,034 per 100,000 previously.

Compared to last week’s report, there were about a third fewer cases recorded (6,121 compared to 9,186).

But the new data means that Cyprus remains in the ECDC’s ‘dark red’ zone, as its 14-day cumulative Covid-19 diagnosis rate exceeds 500.

Close to all cases were locally acquired, at 98.6 per cent and of those infected in the two-week period just over half were women, at 51.7 per cent.

The average age of hospital patients admitted to ICUs was 67 and mainly male, at 66 per cent, while the median length of stay was 13 days.

As of May 12, there were 38 people in the ICU of which 68.4 per cent had underlying health conditions.

For those hospitalised with Covid-19 in general, the average age is 62 of whom 58.5 per cent are male.

Of those hospitalised 55 per cent have comorbidities.

Two thirds of those who died from Covid-19 are men, with 226 as of May 11 from the 342 in total, while Limassol and Nicosia have just over a third of the recorded deaths each, with 36.6 per cent and 34.8 per cent respectively.

At the other end, Paphos has recorded 23 deaths equating to 6.7 per cent of the total.

How a tiny, runaway piglet finally found a sanctuary