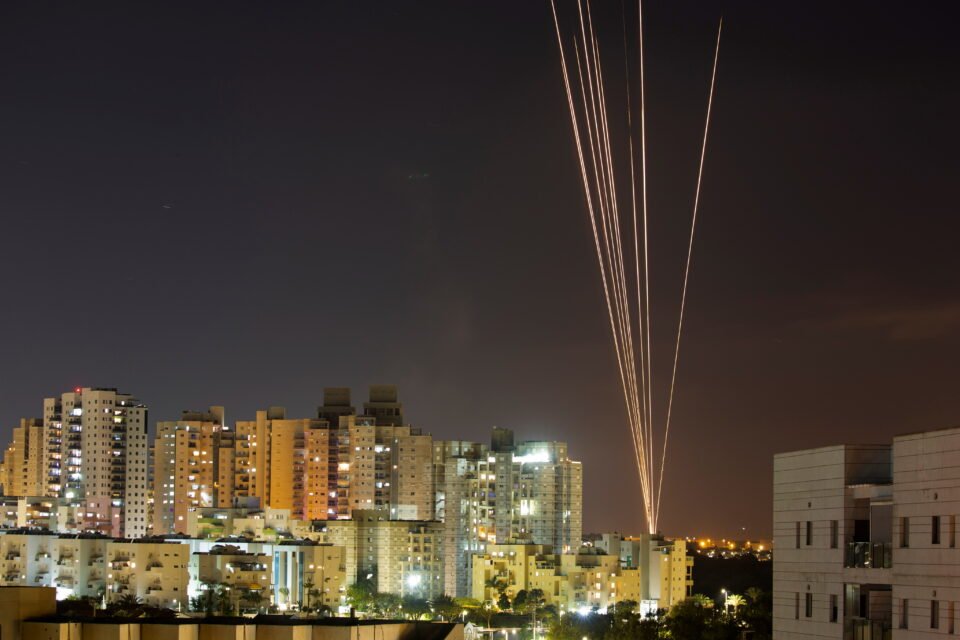 Streaks of light are seen as rockets are launched from the Gaza Strip towards Israel, as seen from Ashkelon, Israel May 13, 2021. REUTERS/Amir Cohen

As hostilities entered their fifth day, with no sign of abating, the Israeli military said in a statement shortly after midnight that air and ground forces were attacking the Hamas-run enclave. Rocket barrages from Gaza swiftly followed.

Although the statement gave no further details, Israeli military affairs correspondents who are briefed regularly by the armed forces said it was not a ground invasion, and that troops were firing artillery from Israel‘s side of the border.

Residents of northern Gaza, near the Israeli frontier, said they had seen no sign of Israeli ground forces inside the enclave but reported heavy artillery fire and dozens of air strikes.

The U.N. Security Council will publicly discuss the worsening violence between Israel and Palestinian militants on Sunday, diplomats said after the United States earlier objected to a meeting on Friday.

The sound of artillery fire and explosions echoed across northern and eastern parts of Gaza into early Friday morning. Witnesses said many families living in areas near the border quit their homes, some seeking shelter at United Nations-run schools.

Violence also spread to mixed communities of Jews and Arabs in Israel, a new front in the long conflict. Synagogues were attacked and fighting broke out on the streets of some towns, prompting Israel‘s president to warn of civil war.

At least 109 people were killed in Gaza, including 29 children, over the previous four days, Palestinian medical officials said. On Thursday alone, 52 Palestinians were killed in the enclave, the highest single-day figure since Monday.

Worried that the region’s worst hostilities in years could spiral out of control, the United States was sending in an envoy, Hady Amr.

Truce efforts by Egypt, Qatar and the United Nations had yet to deliver a sign of progress.

U.S. President Joe Biden called on Thursday for a de-escalation of the violence, saying he wanted to see a significant reduction in rocket attacks.

After Sunday’s Security Council meeting was announced, Linda Thomas-Greenfield, the U.S. ambassador to the United Nations tweeted: “The U.S. will continue to actively engage in diplomacy at the highest levels to try to de-escalate tensions.”

Militants fired rocket salvoes at Tel Aviv and surrounding towns on Thursday, with the Iron Dome anti-missile system intercepting many of them. Communities near the Gaza border and the southern desert city of Beersheba were also targeted.

Five Israelis were wounded by a rocket that hit a building near Tel Aviv on Thursday.

Netanyahu said Israel has struck a total of close to 1,000 militant targets in the territory.

The U.N. Security Council will publicly discuss the worsening violence between Israel and Palestinian militants on Sunday, diplomats said, reaching a compromise over U.S. objections to a meeting on Friday.

Diplomats said the United States, a close ally of Israel, had initially suggested a virtual public meeting could be held on Tuesday.

U.S. Secretary of State Antony Blinken said on Thursday he hoped waiting a few days would allow for “diplomacy to have some effect and to see if indeed we get a real de-escalation,” adding that Washington was “open to and supportive of a discussion, an open discussion, at the United Nations.”

Hostilities entered their fifth day on Friday, with no sign of abating. Israel fired artillery and mounted more air strikes against Palestinian militants in the Gaza Strip amid constant rocket fire deep into Israel‘s commercial centre.

The 15-member council has met privately twice this week about the worst hostilities in the region in years, but has so far been unable to agree on a public statement, diplomats said.

Such statements are agreed to by consensus, and the United States did not believe it would be helpful, they said.

All council members also have to agree to a meeting under rules guiding the body’s virtual operations during the COVID-19 pandemic.

Israel unleashed its offensive on militants in Gaza after Hamas fired rockets at Jerusalem and Tel Aviv in retaliation for Israeli police clashes with Palestinians near al-Aqsa mosque in East Jerusalem during the Muslim fasting month of Ramadan.

Worried that hostilities could spiral out of control, the United States is sending an envoy to the region.

“The U.S. will continue to actively engage in diplomacy at the highest levels to try to de-escalate tensions,” U.S. Ambassador to the United Nations Linda Thomas-Greenfield posted on Twitter after the Sunday meeting was agreed.

Truce efforts by Egypt, Qatar and the United Nations have so far offered no sign of progress.

Brigadier-General Hidai Zilberman, the Israeli military’s chief spokesman, said attacks on militants’ rocket production and launching sites were “disrupting Hamas’ activities”, but still not to the point of stopping the barrages.

He said between 80 and 90 militants had been killed in Israeli attacks.

Zilberman said Israel was “building up forces on the Gaza border”, a deployment that raised speculation about a possible ground invasion, a move that would recall similar incursions during Israel-Gaza wars in 2014 and in 2009.

Israeli military affairs correspondents, have said however that a major ground incursion is unlikely, citing high casualties among the risks.

“Mass up as you wish, from the sea, land and sky. We have prepared for your kinds of deaths that would make you curse yourselves,” he said.

So far some 1,750 rockets have been fired at Israel, of which 300 fell short in the Gaza Strip, the Israeli military said.

The hostilities have fuelled tension between Israeli Jews and the country’s 21% Arab minority who live alongside them in some communities. Jewish and Arab groups attacked people and damaged shops, hotels and cars overnight.

Although the unrest in Jerusalem was the trigger for hostilities, Palestinians are frustrated by setbacks to their aspirations for an independent state in recent years, including Washington’s recognition of disputed Jerusalem as Israel‘s capital.

On the Israeli political front, Netanyahu’s chances to remain in power after an inconclusive March 23 election appeared to improve significantly after his main rival, centrist Yair Lapid, suffered a major setback in efforts to form a government.