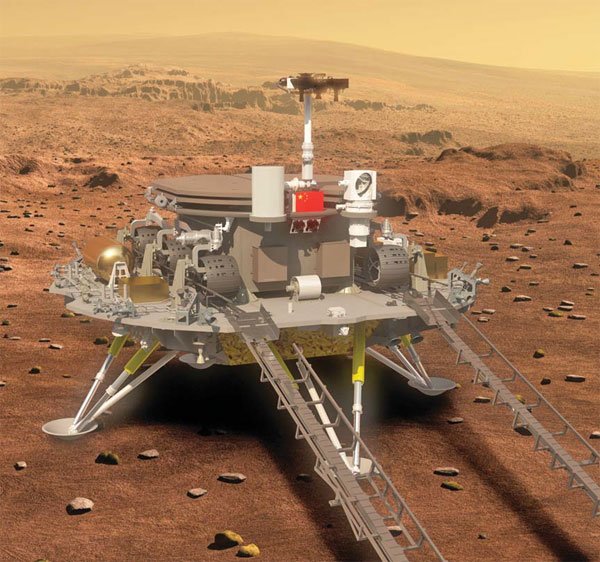 China on Saturday landed its Mars probe, Tianwen-1, on the red planet, ushering in a new chapter of China’s deep space exploration and marking another contribution to humanity’s exploration of the universe.

China is the second nation in history to land a space vehicle on the Mars.

Ancient Chinese paid special attention to Mars. They were confused by its irregular and unpredictable movements, which were taken as an omen of natural disasters, changes of dynasties and deaths of the people.

In the popular sci-fi Star Trek series, Utopia Planitia on Mars is the Starfleet vessel construction and design site in the 24th century.

The successful landing of Tianwen-1 in Utopia Planitia is a stepping stone to answering questions and future missions.

Like the space station project and lunar exploration program, China is pursuing the deep space quest for a better shared future, in addition to proving its space capacity.

And China is not looking to compete for leadership in space.

China embarked on the journey to stay true to its original target — unveiling the secrets of the universe and contributing to humanity’s peaceful use of space.

Mars is at the forefront of international deep space exploration. It could help humanity go deeper into space and provide first-hand data for research, such as the origin and evolution of the solar system and life.

Mars is also a potential target for crewed landing missions. It can be reached using existing space capabilities, and its environment is closest to Earth in the solar system.

The independent mission endured a near seven-month journey plus the final intense moments of entry, descent and landing.

A relatively flat region in the southern part of the Utopia Planitia was chosen for the landing and scientific research value.

Earlier research showed the landing site might be the edge of an ancient ocean or lake in the early history of Mars. Chinese scientists are looking for more evidence of water-ice, and will share the data with their international counterparts.

China is a latecomer in planetary exploration. In its maiden voyage, it took a 3-in-1 approach (orbiting, landing, and roving in one mission), an innovative but complex way, hoping to push technological boundaries and test more options in deep space exploration.

Following the landing, Mars rover Zhurong is expected to be released.

The rover is named after the god of fire in ancient Chinese mythology. Zhu, meaning wish, expresses the good wishes for humankind’s space exploration. Rong, meaning integration and cooperation, reflects China’s vision of the peaceful use of space and building a community with a shared future for humanity.

On board Zhurong, six types of scientific payloads are designed to unlock more secrets of the red planet.

A sample-return mission is also planned.

The universe is vast and exploration will never end. It will take all humanity’s time and capacity to know the whole story of Mars. China will cooperate, contribute and share, expanding knowledge about our planetary neighbor and beyond.