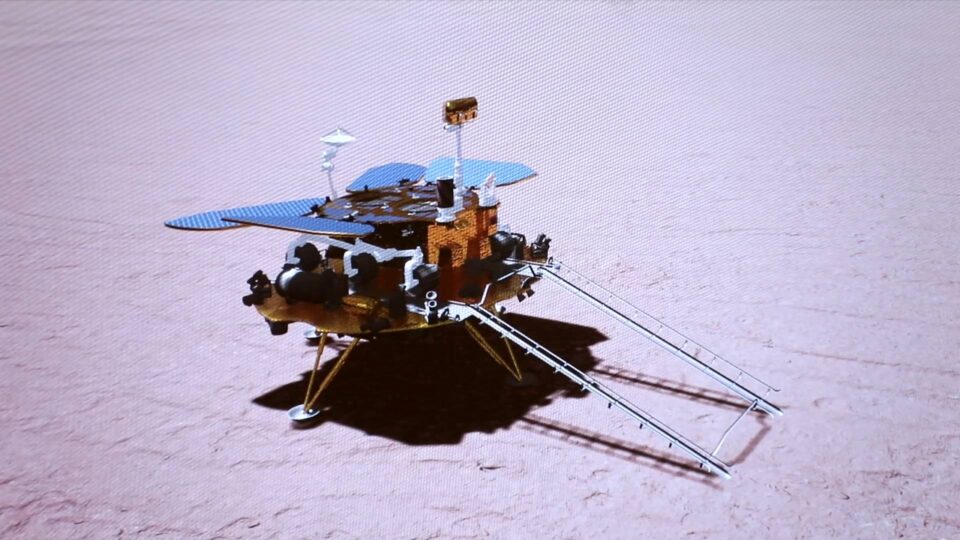 It is the first time China has landed a probe on a planet other than Earth.

“The Mars exploration mission has been a total success,” Zhang Kejian, head of the CNSA, announced at the Beijing Aerospace Control Center.

After the success was confirmed, the control center in Beijing was filled with cheers and applause.

“It’s another important milestone for China’s space exploration,” he said.

The Tianwen-1 probe touched down at its pre-selected landing area in the southern part of Utopia Planitia, a vast plain on the northern hemisphere of Mars, at 7:18 a.m. (Beijing Time), the CNSA announced.

It took ground controllers more than an hour to establish the success of the pre-programmed landing. They had to wait for the rover to autonomously unfold its solar panels and antenna to send the signals after landing, and there was a time delay of more than 17 minutes due to the 320-million-km distance between Earth and Mars.

Tianwen-1, consisting of an orbiter, a lander and a rover, was launched from the Wenchang Spacecraft Launch Site on the coast of southern China’s island province of Hainan on July 23, 2020. It was the first step in China’s planetary exploration of the solar system, with the aim of completing orbiting, landing and roving on the red planet in one mission.

The name Tianwen, meaning Questions to Heaven, comes from a poem written by the ancient Chinese poet Qu Yuan (about 340-278 BC). China’s first Mars rover is named Zhurong after the god of fire in ancient Chinese mythology, which echoes with the Chinese name of the red planet: Huoxing (the planet of fire).

The spacecraft entered the Mars orbit in February after a journey of nearly seven months through space, and spent more than two months surveying potential landing sites.

In the early hours of Saturday, the spacecraft began to descend from its parking orbit, and the entry capsule enclosing the lander and rover separated from the orbiter at about 4 a.m.


After flying for approximately three hours, the entry capsule hurtled toward the red planet and entered the Mars atmosphere at an altitude of 125 km, initiating the riskiest phase of the whole mission.

First, the specially designed aerodynamic shape of the entry capsule decelerated with the friction of the Martian atmosphere. When the velocity of the spacecraft was lowered from 4.8 km per second to about 460 meters per second, a huge parachute covering an area of about 200 square meters was unfurled to continue reducing the velocity to less than 100 meters per second.

The parachute and the outer shield of the spacecraft were then jettisoned, exposing the lander and rover, and the retrorocket on the lander was fired to further slow the speed of the craft to almost zero.

At about 100 meters above the Martian surface, the craft hovered to identify obstacles and measured the slopes of the surface. Avoiding the obstacles, it selected a relatively flat area and descended slowly, touching down safely with its four buffer legs.

The craft’s plummet through the Martian atmosphere, lasting about nine minutes, was extremely complicated with no ground control, and had to be performed by the spacecraft autonomously, said Geng Yan, an official at the Lunar Exploration and Space Program Center of the CNSA.

“Each step had only one chance, and the actions were closely linked. If there had been any flaw, the landing would have failed,” said Geng.

After separating from the entry capsule, the orbiter, with a designed lifespan of one Martian year (about 687 days on Earth), was lifted to return to its parking orbit and helped relay communications between the landing vehicle and Earth.

The rover Zhurong will take a further seven to eight days to detect the surrounding environment and conduct self-checks before moving down from the lander to the Martian surface, according to Geng.

The six-wheeled solar-powered Zhurong rover, resembling a blue butterfly and with a mass of 240 kg, has an expected lifespan of at least 90 Martian days (about three months on Earth).

China has constructed Asia’s largest steerable radio telescope with an antenna 70 meters in diameter in Wuqing District of northern China’s Tianjin to receive data from the Mars exploration mission.