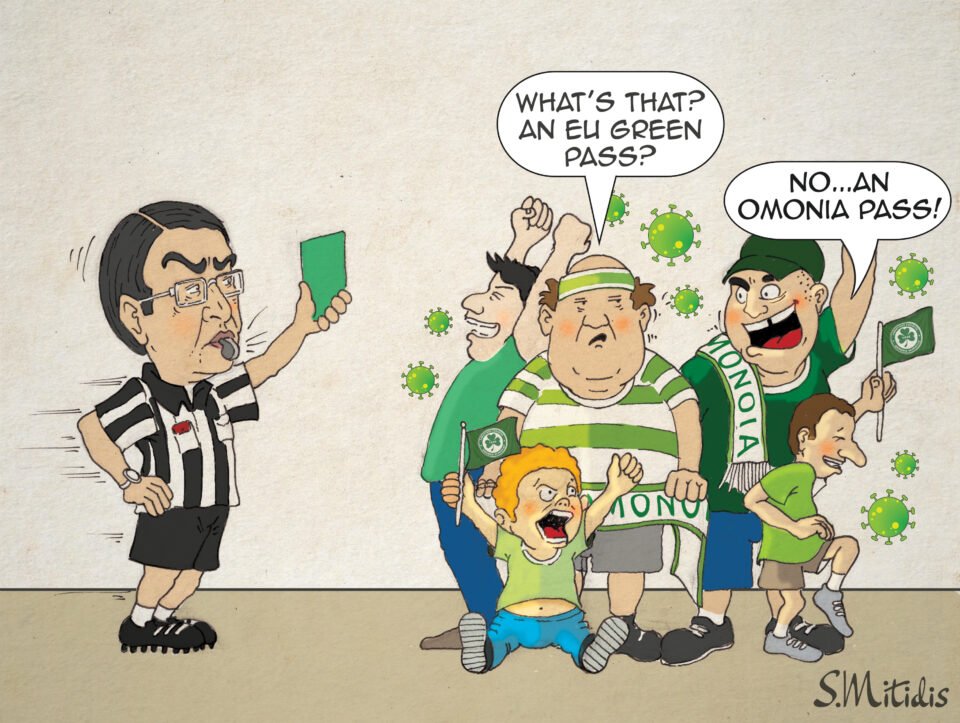 A RECORD 658 candidates from 15 parties/groupings will be contesting the 56 parliamentary seats up for grabs in the elections in a fortnight. Of these, I would guess that some 500, maybe more, have zero chance of being elected, but this does not dim their hopes or stop them from spending money to promote their candidacy.

Why do so many people do it? Is it because they want to boast to their friends and families that they are running for parliament, or do they just want to be part of the mob that shows up for the submission of the candidacies in the hope they will be shown on telly for a second? And what about the independents, whose chances of election are less than zero?

If some of them were doing this for a laugh, to make fun of the political circus, I would get it, but they all take themselves so seriously it supports the theory that having no sense of humour is a requirement for entering politics in Kyproulla. There is no Monster Raving Loony party, because here even the nutcases take themselves seriously.

I would have thought with social media all these wannabe politicians had a platform to expound their views and pretend they are public figures, but it seems Facebook, Twitter and Instagram have the opposite effect. They make the keyboard warriors with more than 50 followers believe they deserve a bigger audience for their boundless wisdom.

MY ONLY encounter with the candidates is seeing them on the billboards all over Nicosia as I drive around and the males all appear the same – photoshopped face, dark jacket, white shirt (light blue if they are more adventurous) and the sombre look of a funeral director.

I should mention the one candidate that stands out (I am only referring to Nicosia) at least on the billboards – Diko candidate, Giorgos Kountouris, the artistic director of the youth symphony orchestra. He is dressed in black, but I doubt the arty, metropolitan styling will be appreciated by the provincial petty-bourgeois masses that vote for Diko.

The presentation of the billboards also follows a standard formula. Each candidate has two or three words to persuade us to vote for him/her. Here are some: Always close to people; There is hope; Honourably and sincerely; Going against; Actions with results; Clear strong voice; Cleanly, ably, reliably; Faith, country, family.

Discussing these cliches at the coffeeshop, one cynical metrios drinker said: “If there was one candidate, who said ‘I am standing for the money, the pension, the free travel, because there is no other job you are paid so much for doing so little, and I am lazy, selfish bastard,’ I would vote for him.”

If they needed a short phrase to say all this on the billboard, they could use the selfless, ‘For my family’.

STAYING on election issues, Akel chief, comrade Andros got his knickers in a twist last week after the administrative court said it could not issue a ruling about the name Akel would use on the ballot paper because such a matter was not in its jurisdiction. Only the electoral court could issue a decision, but this would be after the elections.

This meant the commies could not use the ‘Akel Left, New Forces’ title that it had been using for 30 years without a problem. After advice from the AG, the chief returning officer decided commies could only use the name under which the party is registered in the official party registry, namely Akel. Andros, inevitably, turned this into a conspiracy by the nasty government hell-bent on harming Akel, and promised to take the matter to the electoral court.

It is very difficult to understand why he is so upset. Was there a chance that any Akelite, no matter how low his IQ, would think the party had moved to the Right, because it was no longer called Akel Left, New Forces, and vote for another party? Or were there any non-Akelite idiots that voted for the party because they believed they were backing New Forces and not a monolithic, backward, communist party?

EDEK chief, Dr Sizopoulos met the Russian ambassador Stanislav Osadchiy on Thursday in the hope his party’s well-publicised, close links with the Russian Federation would win his party a few more votes. Osadchiy did not say anything after the meeting, presumably not to be accused of meddling in the elections, but I suspect the real reason was not cause offence to Turkey.

It is good to see that now Mother Russia has lost its most loyal supporter (Yiorkos Lillikas is retiring and will no longer selflessly serve the Cypriot people) it can still rely on Dr Sizo to remind us that Russia is a constant supporter of the Cyprus Republic’s rights.

SOLIDARNOSC, the party led by Dr Theocharous, ruined Dr Sizo’s narrative by censuring the stance of Mother Russia’s foreign minister Sergei Lavrov after his meeting with the UN secretary-general.

In a terse announcement, it said: “Mr Lavrov not only failed to reject Turkey’s position for a two-state settlement but on the contrary, expressed satisfaction for the mediation efforts and considers it a good idea ‘to unearth all the range of positions and interests’ regardless of the fact that these positions bury the Cyprus Republic.”

The panic-stricken party added that “we wonder whether Russia has changed its stance on our national issue….” Of course, it hasn’t: the support is constant and unchanging – just ask Dr Sizo who spoke to Osadchiy only a few days ago.

IN THE END, the SafePass that was to have been replaced by a digital app was even more temporary than the health minister had in mind when giving his assurance. It lasted a total of six days and from tomorrow much of it enter the decrees recycle bin.

There was no way Disy would have gone to elections in two weeks’ time with an unpopular, repressive measure in place that forced people to queue up for two rapid tests a week in order to re-enter café society. Its scrapping for outdoor spaces was announced on Friday and all we can say is good riddance.

Last Monday the government’s Omonia Pass was put in force for 24 hours. This pass allowed people from all over Cyprus to gather in a training ground outside Nicosia, without observing any social distancing (face masks were optional) to celebrate Omonia winning the league championship. Police presence ensured the area remained a Covid-free zone for the 20,000 fans that gathered in gross violation of the decree on public gatherings (10 is the maximum).

Prez Nik, who wants to be loved, reacted to what happened like a benevolent uncle. “Let us consider the feelings of fans whose team wins after 11 years,” he said. But when in the past a couple of dozen people gathered for a party, he labelled them recklessly irresponsible and selfish and threatened to impose tougher restrictions as punishment for such behaviour. There were no elections at the time.

THE DELUSIONS of grandeur of our foreign minister were displayed at the Delphi Economic Forum in Greece, where he made speeches on two consecutive days.

According to the Tass news agency on Thursday, Nicos Christodoulides, “stressed that Cyprus, despite its small size as a state, manages to play a crucial mediating role with the aim of peace and calm in the region and added that the country follows an outward-looking foreign policy, with the aim of becoming a catalyst and coordinator in the region.”

Small countries (this is what the debate was about) should not be isolated in a globalised system but “have opportunities to undertake a leading role as mediators, operate as coordinators in the region.” He did not mention when Kyproulla would embark on her mediating role between the Israelis and the Palestinians to restore peace and calm in the region.

The self-aggrandising Paphite could not see the irony of a country that has been unable to solve its own problem, despite 50 years of trying, being trusted to mediate in any dispute.

SOME customers have complained, justifiably, because our establishment has still not published its celebratory piece to mark Akel’s 80th anniversary, as it had announced several weeks ago. We will try to do this before the elections, in the hope it would encourage some people to vote for Akel Left, New Forces. It will be a double celebration because I have been informed that Diko is marking its 45th birthday.

Ex-politicians calling on the bank of favours