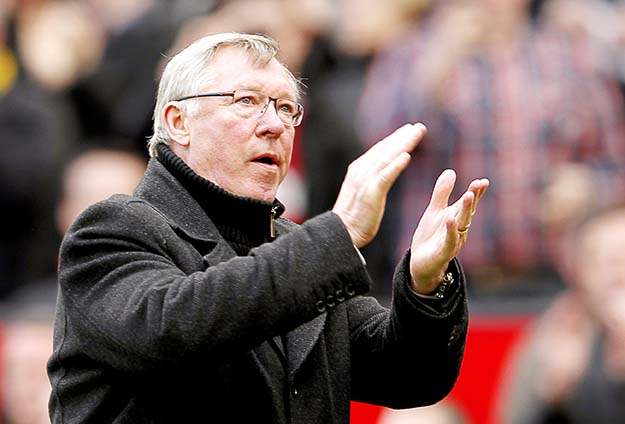 The brain haemorrhage and Ferguson’s recovery provide the thread than runs throughout a film on his life – Sir Alex Ferguson: Never Give In – directed by Jason

Jason Ferguson feared the worst as hospital staff stared at an image of a massive brain haemorrhage while his oblivious father chatted away to a nurse.

But Sir Alex Ferguson fought back from the brink, and directing a film about the road to recovery may have inadvertently helped his son work through some of the trauma of May 5, 2018.

Ripples were sent around the football world and beyond when it emerged that Manchester United’s most successful manager was fighting for his life in intensive care after collapsing at home.

Jason referred to his dad as ‘Alexander’ when calling 999 in an off-the-hoof attempt to protect his anonymity, but privacy quickly paled into insignificance when it became clear that he might not return home.

Asked if there were there moments when he thought it was not going to end well, former football agent Jason told the PA news agency: “Oh totally, absolutely.

“We went up to Macclesfield hospital first of all and that was when it was identified that he had had a brain haemorrhage.

“I remember going out and speaking to the doctor. She’d just come in and told us, ‘Look, you’ve had a bleed on the brain and we’re going have to get you up to Salford Royal for an operation’.

“I remember stepping outside the room and saying to her, ‘How bad is this?’ and she looked at me almost as if I was like an idiot and just was like, ‘It’s bad, this is a pretty serious situation’.

“Then I walked back in and there was two guys looking at the scan image and I went over and said, ‘Look, that’s my dad, what’s the story?’ The same questions, really.

“They said it’s ‘not good’ but what they couldn’t understand was relating the image that they were looking at on the screen of this massive bleed and the fact that behind the curtain, in a little bay, he was sitting up talking to a nurse.

“They couldn’t understand that he was sitting up talking.

“He obviously remembers none of this. But, yeah, going up to Salford, getting pulled by the doctors, getting told, ‘Get yourself ready here’, you know. It was not easy.”

Jason trailed off as he recalled that moment during a period when his dad was given just a 20 per cent chance of survival.

“It brings mortality to the table,” he said. “Invulnerable – sometimes you view him in that way. That, as I say, brought the fact he isn’t to the table.”

The brain haemorrhage and Ferguson’s recovery provide the thread than runs throughout an upcoming film on his life – ‘Sir Alex Ferguson: Never Give In’ – directed by Jason.

The 79-year-old’s remarkable memory is clear throughout the film – recalling all bar one of United’s line-up the first time he saw them in 1953, for example – as is the fact that the scars from his time at boyhood club Rangers provided a catalyst to his remarkable success.

There are the twists of fate, too, like scoring a hat-trick for St Johnstone just as he was about to pack it in and move to Canada, which is the only time Jason can recall his father giving up during a life in which his teams replicated his never-say-die spirit.

Ole Gunnar Solskjaer’s stoppage-time strike against Bayern Munich epitomised that mindset and completed the treble, Ferguson’s holy grail, in 1999, with the Norwegian now calling the shots from the dugout.

“I think the one thing is the absence of fans. He’s mentioned that a lot.

“He’s referred to the stadium as like a ghost town, which it is. All stadiums are.”

Ferguson cannot wait for the fans to return to Old Trafford for the first time in 436 days against Fulham on Tuesday, with the film about his life coming out the day after next week’s Europa League final against Villarreal.

Jason estimates he has watched it more than 100 times by now and believes directing the film has not only allowed him to show the man behind the manager but helped digest what happened in 2018.

“I’ve asked myself recently, ‘Has this been some sort of therapy in a way?’ – because it was pretty traumatic, the day,” he added.

“I’m not sure. I think in a way it’s probably allowed me to detach myself from it and I was getting on with the job, so it really stripped the emotion out of it in a way.

“I felt that our relationship and my closeness would allow him to be comfortable coming out as the man he is, which he did.”