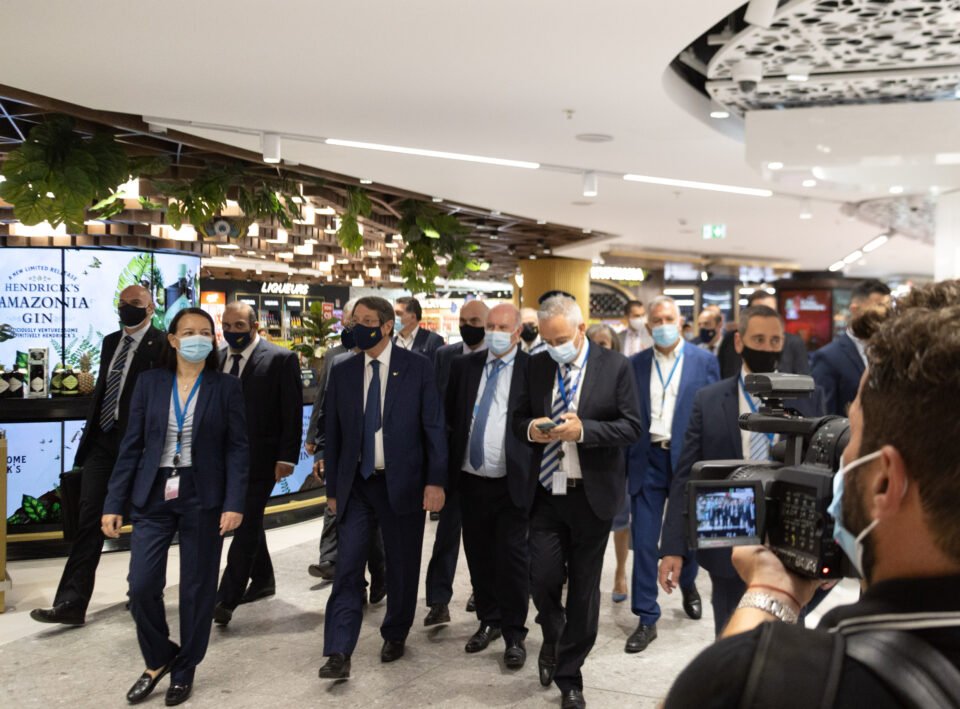 Anastasiades being led through Larnaca airport on Tuesday

Timing often plays bad tricks on politicians. President Anastasiades wasn’t to know that his scheduled visit to Larnaca Airport on Tuesday would have coincided with an announcement by the UK government urging Britons not to holiday in countries like Cyprus which were in the amber category.

On Monday Health Secretary Matthew Hancock told The Times Radio, “people should not travel to amber or red list countries unless it is absolutely necessary, and certainly not for holidays.” This advice was also issued by the prime minister’s spokesperson. “Our advice is that no one should be travelling to amber list countries in the interests of public health,” said the spokesperson.

On Tuesday morning Anastasiades was at Hermes airport, probably to help the Disy election campaign, with a positive message about tourism. “We are on the path to significant recovery of the tourist product, which is one of the main assets of the Cyprus economy,” he said adding, “we can maintain hope and optimism.”

What hope and optimism could there be when the government of your biggest tourist market has advised its citizens not to travel to Cyprus for holidays? There are punitive measures for those that ignore the government advice – a test before returning, two more tests on return and quarantine for 10 days at home. These are strong disincentives for visiting any country on the amber list, which also includes France and Spain.

The problem for Cyprus has been the high number of positive cases per 100,000 people that were being reported until recently. This was because of the excessive number of rapid tests carried out every day, which resulted in Cyprus having one of the worst infection rates per 100,000 in the EU, despite having one of the lowest positivity rates. Countries like Greece, that carried out much fewer tests had much lower infection rates than Cyprus despite having a much higher positivity rate.

The number of cases has fallen dramatically in the last 10 days and the positivity rate on Monday was just 0.27 per cent. Hopefully, this epidemiological picture will continue so that the next time the UK government, which is under pressure from the travel industry to expand the green list, reviews the categorisation of countries Cyprus could be moved to the green list

At least our second biggest tourist market, Russia, has not placed any restrictions on its citizens travelling to Cyprus and hoteliers report most of their bookings are from Russia. But only when the UK government moves Cyprus to the green list could we really be optimistic about the recovery of the tourist product.