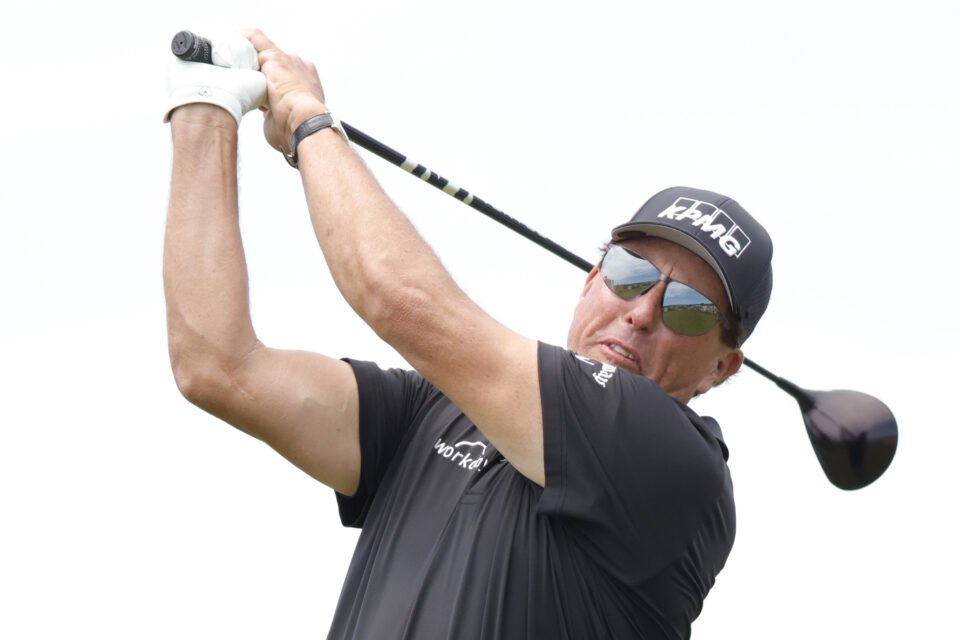 Phil Mickelson, 50, heads into the weekend with a share of the lead at the US PGA Championship as he looks to become the oldest player to win a major title

Six birdies earned Phil Mickelson a shot at his first major title since 2013, as he entered the final two rounds of the PGA Championship six under par and tied for the lead with South African Louis Oosthuizen.

A trio of bogeys left him at two over after nine holes but the American lefty, who started on the back nine, came alive in the latter half of the second round, carding three-under par 69 after draining a 22-foot-plus putt for birdie on the par-four ninth to wild applause at the Ocean Course.

“I had to be patient but I was able to make a few birdies there,” said the five-time major winner.

“I’m heading into the weekend with an opportunity.”

The 50-year-old will become the oldest major winner if he can fend off a stacked field of competitors and survive windy conditions that have derailed others, with his brother on the bag.

Standing between him and golf history is Oosthuizen (67), who nimbly navigated tough conditions to put up five birdies.

The 2010 Open Champion hit greens consistently but was cruelly deprived of a perfect round – and the outright lead – after a missed putt led to a bogey on the par-four 18.

“It’s going to be probably up there as one of my best (rounds),” the 38-year-old said in a televised interview. “It was tough today – I’m just glad that I was striking really good.”

Rounding out the top three was American Brooks Koepka (71), who showed flashes of brilliance with a pair of eagles but struggled with uneven play with four bogeys two months after undergoing knee surgery.

“It’s definitely a ball strikers’ golf course,” said Koepka, who ended the day one stroke back from the lead. “I’m four under so I feel alright.”

Reigning Masters champion Hideki Matsuyama (69) of Japan nearly ended the day tied with two-time PGA Championship winner Koepka after putting up six birdies, but a bogey on 18 saw him slip into a three-way tie for fourth with South Africans Branden Grace (71) and Christiaan Bezuidenhout (70).

The blustery Kiawah Island course pulled no punches, flummoxing a stacked field that failed to produce a single bogey-free round through the first two days.

Overnight leader Canadian Corey Conners (75) saw his lead evaporate as he stumbled into five bogeys in the first six holes starting off the back nine, with four birdies the only reminder of his effortless, five-under-par first-round performance.

World number one Dustin Johnson turned in a disastrous two-over-par performance to miss the projected cut along with second-ranked American Justin Thomas.

Johnson, who also missed the cut at last month’s Masters, was the first world number one to miss the cut at consecutive majors since 1997.