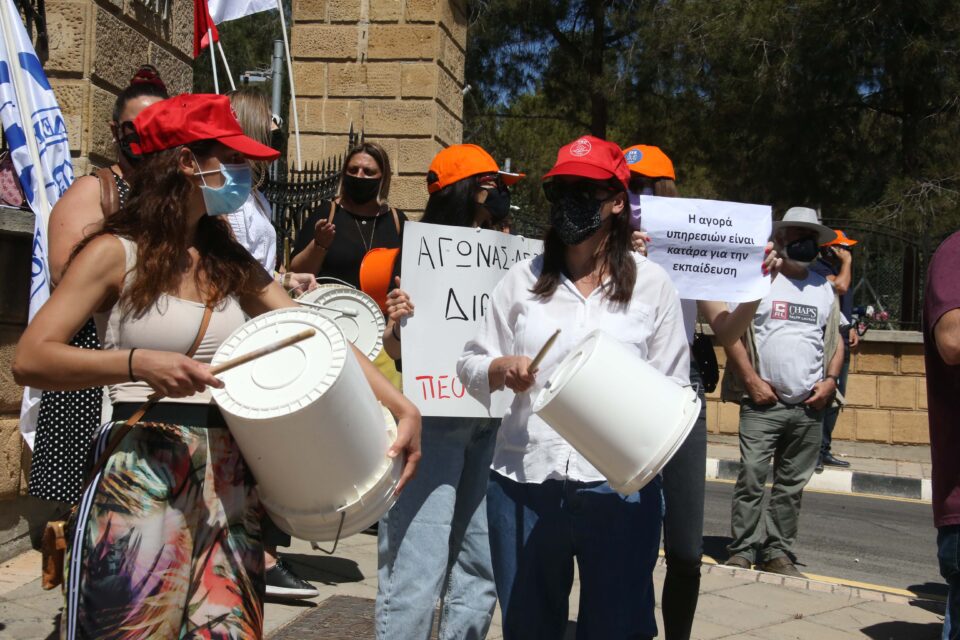 Striking part-time teachers, who work in the state tuition centres afternoons and evenings, marched to the presidential palace on Friday as part of their ongoing protests about their work terms. They are demanding formalisation of their employment – the government treats them as freelancers whose services it buys – so they could claim unemployment pay in the summer months when the centres are closed.

It is a typically unreasonable demand, made only because the employer is the state and there is a parliamentary election. All opposition parties are backing these teachers, presenting them as helpless victims that are being cruelly exploited by an evil government determined to trample on workers’ rights. Nothing could be further from the truth, but there are some 4,650 teachers involved and they represent a sizeable number of votes.

Akel spokesman Stefanos Stefanou accused the government of “turning, overnight, teachers from wage-earning to self-employed, without rights, on low wages and with humiliating employment terms.” This was contradicted by one of the union representatives of the teachers who said: “We are not seeking a pay-rise or permanence, but only the minimum workers’ rights.” If the strikers are not demanding pay rises, their wages cannot be that low, as Stefanou was claiming.

The reality is that these teachers should be treated as freelancers selling services to the state. Many of them have morning jobs while some are pensioners. The education minister, Prodromos Prodromou, pointed out that the average monthly earnings of these teachers were between €200 and €300, which illustrated the part-time nature of their work. By what reasoning would it be justified to allow them to claim unemployment benefit in the summer, when the tuition centres are closed, even though they could still have other jobs, and their employment contract was for nine months.

There is no logic, but because the employer is the state, teachers are trying to squeeze a little more money out of the taxpayer, claiming their rights were being violated. But if they were offering freelance services in the private sector, to several buyers, they would not be entitled to unemployment pay if one of the contracts was terminated or suspended. But because these teachers work for a few hours a week for the state they believe special treatment is their right.

In a way, this is perfectly understandable, considering the special treatment and privileges enjoyed by all full-time public employees, a despicable regime fully back by the political parties.

Coronavirus: Cyprus expects to be on UK green list in one or two weeks