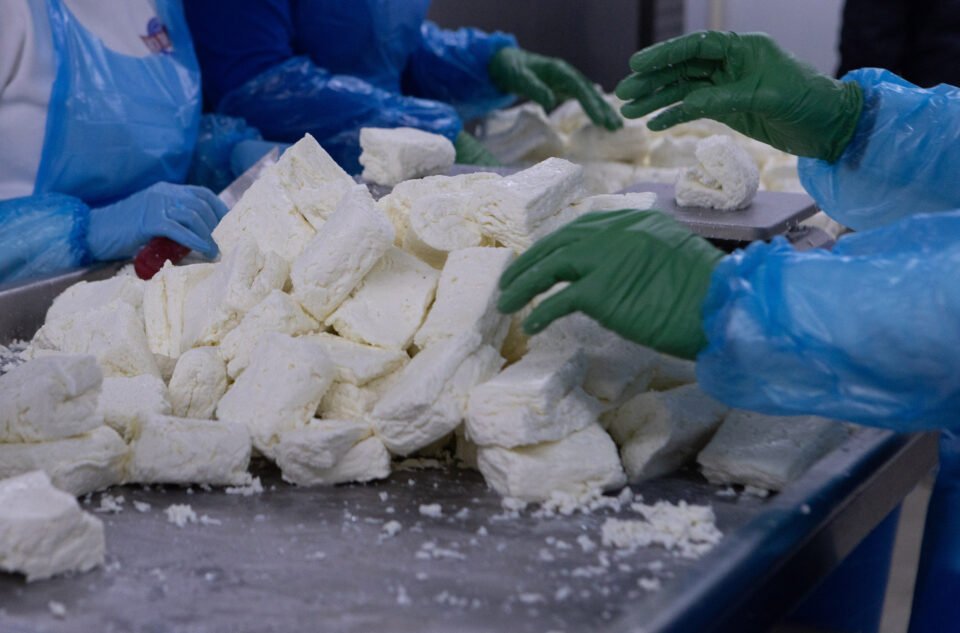 'Bars' of precious white gold were once piled high

Hail-Umi, the goddess of creation, knew she had committed gluttony. She knew that she should not have been so greedy with her breakfast of the cheese of white-gold. The trouble was, this cheese could not be resisted. In her anger and self-loathing, she grabbed the handle of the pan in which she had grilled the cheese and threw it into the Mediterranean Sea. She said: “I gift the people of the Misshapen Pan island this irresistible cheese and curse them with the sin of greed”.

Many years passed, and the people of the Misshapen Pan made their white gold Hail-Umi cheese with whatever milk they had. First, they had sheep and goats, and they used their milk. Then they had cows that gave more milk, and tasted and smelled sweeter, and they used that. In between, they used some of each. They sold their Hail-Umi cheese far and wide, to lands all around the world. No one could resist it and people wanted more and more. It made them richer and richer each year. People of other lands liked not just mint, but were partial to chilli and basil in their Hail-Umi cheese. Some liked their Hail-Umi pieces folded, others liked them as slabs. The people of the Misshapen Pan produced Hail-Umi for all tastes, and everyone was happy.

But then, the curse of evil greed struck the Misshapen Pan island. One day, the high priests of the church of Hail-Umi, known as the Hell-Loony, said: “We do not want to share our cheese of white gold’s hallowed name with anyone else. The name of the divine Hail-Umi can only pass through the lips of the people of the Misshapen Pan because only they are bestowed with this privilege. And with this privilege, we deem that a true Hail-Umi was only true before the year of Our Lord 1955, when it was made of mostly sheep and goats’ milk and had only mint inside it. Ever since then, many people who used the hallowed name of Hail-Umi for their cheese did so in vain because it was not mostly made of goat and sheep’s milk. This is blasphemy! You must cease using the Hail-Umi name at once and ask for forgiveness. This is the edict which you must obey.”

So, henceforth, the Hell-Loony, believing that only they would profit by the Hail-Umi cheese persecuted people of their own land, and other lands, and forced them to pay penance if they so much as uttered the sacred words Hail-Umi without conforming to their edict.

All the peoples in all the lands including the Misshapen Pan protested about this imposition by the Hell-Loony and their powerful but reckless advocates known as the Eyu. The people of the Misshapen Pan said unto them: “You are setting us an impossible task. Sheep and goats do not produce as much milk as cows. Even if we turn the whole of our Misshapen Pan into one big goat and sheep farm, we will still not be able to make enough cheese to feed our people and our patrons.” They pleaded and begged to be granted the use of the hallowed name, but the answer that always came back was “You must comply with our edict.”

The protesters, from all over the earth, henceforth, found their cheese dispossessed of the name they had always used. However, although they had lost the name, they had kept the cheese. So they went their own way and established their own alliance, and this gave birth to a new name to the cheese. Unfettered by strictures, they continued with the great taste people had loved for decades and made imaginative improvements to make their patrons happy. They became very rich, and everybody was overjoyed.

The Hell-Loony, their Eyu advocates, and their followers had kept the name, but lost the cheese. All the money they spent on goat and sheep farms were in vain. Their patrons did not want to pay more for a cheese they didn’t like. The once hallowed name of Hail-Umi was lost in the mists of time.

Aesop, looking down on the Hell-loony and the Eyu from above said: “The Hail-Umi name is dead. You have succumbed to your greed, and your greed has killed the goose that laid the golden egg.”

Crucial footnotes to the tale of Hail-Umi

Cypriots have consistently called this cheese Hellim/Halloumi irrespective of whether it was made from sheep, goat, or cows’ milk, or any combination. Whereas PDO cheeses from other countries merely formalised what was routinely being produced, Cyprus reverted back to a product which hasn’t generally been consumed for some 60 years. At best, with high cost of production and less popular aroma and different taste, the PDO Halloumi/Hellim is likely to become a niche connoisseur product. At worst, this name will disappear in time, and be superseded by a new name established for the existing cow’s milk based product.

Questions will be asked about why the EU should be subsidising a new sheep and goat milk-based product at a capital cost of hundreds of thousands of euros which may fail, whilst damaging the sales of the current highly successful cows’ milk-based product.

Where funding is badly needed is for putting right the failure of the Republic of Cyprus produce to meet required food safety levels. This is where over many years (2009-2012, 2014-2019), more than 5 per cent of the samples provided for testing exceeded the maximum permissible level of medicinal and biocidal residuals and undoubtedly impacting on public health.

There is no publicly available feasibility study, business case, or analysis of risk for the new PDO. Yet, changing from cows to sheep and goat farming and the consequential land re-use will undoubtedly impact on almost every aspect of life on the island including the wider economic, social, political and environmental dimensions. It is not even clear that there is sufficient pasture land to support the expanding volumes of milk required for the PDO.

Fahri Zihni is chair of Embargoed.org, a human rights group which campaigns against the embargoes on northern Cyprus. He is a former policy advisor at the UK’s Cabinet Office and a former president of Society of IT Management, UK.

England’s Champions League race goes down to the wire