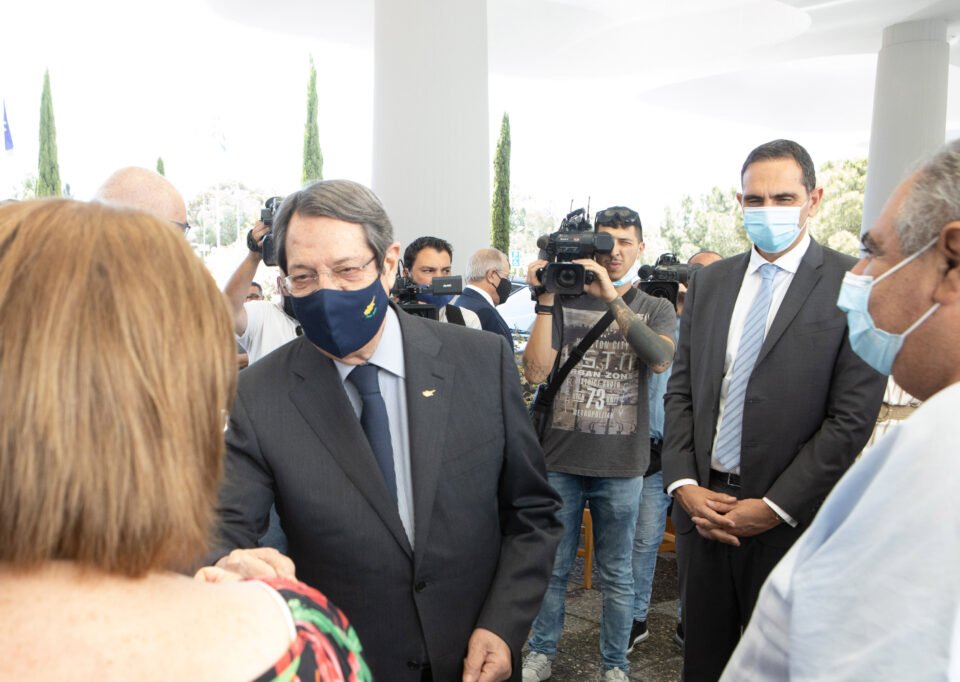 President Anastasiades completely dominated the campaign. He is seen here on the visit to the Makarios hospital with his health minister Constantinos Ioannou

Anyone who followed the last couple of weeks of the campaign could have been mistaken in thinking we would be electing a new president today. President Anastasiades completely dominated the campaign in the last fortnight, making daily public appearances, promoting the government’s achievements, using his spokesmen to answer criticism and making big promises for the future.

While it is not unknown for presidents to have an involvement in a parliamentary election and try to help their party do well, there are limits, which did not seem to exist for Anastasiades. He was even appearing at news conferences, by the side of ministers, announcing vote-winning policies such as the recovery and resilience plan and the EU funding for the health system.

This was not the only first of a campaign held during the pandemic, marked by a lockdown, restrictions on movement and a ban on public gatherings. Despite the restrictions, there is a record number of candidates (659) and a record number of parties and groupings (15) contesting the 56 seats. There will be 149 more candidates than in 2016 and of the 15 parties/groupings, six will be standing for the first time.

Why are there so many parties and candidates? Public discontent about the endemic corruption, which is not blamed exclusively on the government but also on a self-serving political system, must have something to do with it. Individuals from different backgrounds may have grouped together in the belief they could exploit the widespread discontent, not realising how difficult it is to make an impact without the resources and money that is given by the taxpayer, to the parties already in parliament.

Under the circumstances, it is rather simplistic to claim that the unprecedented numbers of parties and candidates standing were an indication of more choice for voters. How many undecided voters have the time to go through the manifestos of five, let alone 15 different parties, in order to make an informed choice at the voting booth? And they are unlikely to scour newspapers and websites or sit in front of the television for hours to find out the positions of the new parties.

As for the hundreds of unknown candidates, competing with each other for a couple of minutes’ public attention, their chances of being noticed are minimal. The younger ones may have made clever use of social media to promote their candidacy, but this will make no difference if they are standing for a grouping with little support. On the other hand, any grouping that has made good use of social media, targeting younger voters, could cause a surprise.

In the mainstream media, the campaign has been dominated by the unrelenting bickering between the Disy-government camp and the opposition camp of Akel-Diko. This daily exchange of accusations has overshadowed everything, receiving extensive coverage in the media and creating the impression that the election is contest of the three biggest parties. How can the voice of a new party be heard in the din created by the big three exchanging accusations about corruption, golden passports, the economy and the auditor-general?

This has been a clever ploy by the big three and the government, which, by dominating the daily headlines, have deprived, not only the new but also the small parties, of much-needed publicity. And they managed to do this right up to the final day of campaigning turning a trivial story about the allegedly forged school leaving certificate of an Anastasiades appointee into a major election issue.

The main objective of engaging in these nasty exchanges was to rally supporters because there are fears of a low turnout, that public discontent would be displayed by people not bothering to vote at all rather than voting for small parties. Voter apathy is a concern of the bigger parties because a lower turnout could allow the small parties to pass the threshold with fewer votes. This is probably the only hope for a fringe party to win a seat.

All will become clear on Sunday night. There could be a surprise or two, which would be perfectly in keeping with the strange and truncated election campaign we have seen, a campaign that gave the impression that only three parties were standing when in fact there were 15.

Time running out on plastic ban