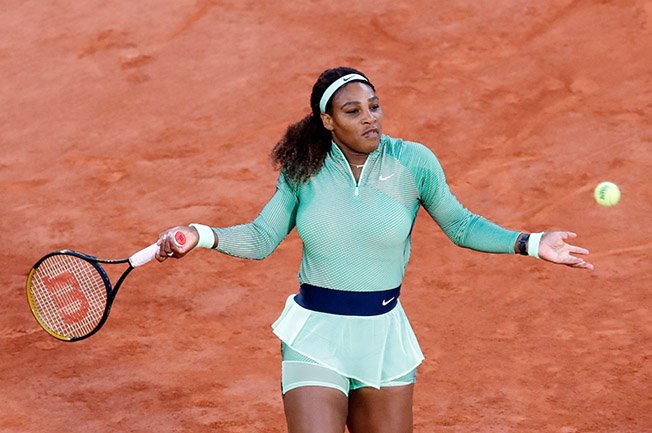 Serena Williams is safely through to round two at Roland Garros

American Serena Williams survived a scare in the first ever night session match at the French Open as she edged out Romanian Irina-Camelia Begu 7-6(6) 6-2 in the first round on Monday.

Organisers have introduced night matches under the Philippe Chatrier Court lights to provide some late-night drama for the fans but the match was played in an empty stadium because of a COVID-19 curfew in the French capital.

The flat atmosphere hardly helped the 39-year-old Williams who squandered a 5-2 lad in the first set against a tricky opponent who battled back to move into a tiebreaker.

Begu then led 6-4 and Williams got lucky with a return that clipped the tape, before rattling off four points to win the opener with a drive volley — producing a roar that echoed around the empty stands.

Williams, who has been stuck on 23 Grand Slam titles since 2017, was far more assured in the second set and managed to claim the win without further fuss.

Kostyuk sent down 16 winners and five aces while Muguruza made a massive 40 unforced errors compared to 24 from her 18-year-old opponent.

Japan’s Naomi Osaka announced she was withdrawing from the French Open in the wake of her decision to boycott post-match media duties at the Grand Slam.

Osaka said she had been suffering from depression since 2018 and would take time away from the court to focus on her mental well-being.

“I think now the best thing for the tournament, other players and my wellbeing is that I withdraw so that everyone can get back to focusing on the tennis,” the 23-year-old said in a statement on Twitter.

CILIC THROUGH AFTER DEFEATING RINDERKNECH

Marin Cilic cruised past France’s Arthur Rinderknech 7-6(6) 6-1 6-2 to set up a second-round clash with Roger Federer.

Cilic and Federer have met in Grand Slam finals twice – at Wimbledon in 2017 and the Australian Open in 2018 – with the Croatian finishing runner-up on both occasions.

Federer, 39, had not played a Grand Slam match since the 2020 Australian Open, but removed any doubts about his fitness concerns with a classy display in the first round.

KONTA COMES UP SHORT AGAINST CIRSTEA

Konta has now lost in the first round at Roland Garros for the second straight year.

The 20-year-old Andreescu, who won the U.S. Open in 2019, served for the match at 5-4 in the decider but Zidansek broke back to set up a thrilling finale.

Second seed Daniil Medvedev notched his first career win at the Roland Garros on his fifth attempt with a dominant 6-3 6-3 7-5 with over Kazakhstan’s Alexander Bublik.

WATSON EXITS IN FIRST ROUND AGAIN

Briton Heather Watson fell 4-6 5-7 to Kazakhstan’s Zarina Diyas in just under two hours. Watson, 29, led both sets 4-2 but Diyas broke back to level at 4-4 on both occasions to seal victory.

Watson has now lost in the first round at Roland Garros for the second straight year.

SINNER THROUGH AFTER GOING DISTANCE WITH HERBERT

The 19-year-old Italian, who reached the quarter-finals on his Roland Garros debut last year, will next face compatriot Gianluca Mager.

Iga Swiatek celebrated her 20th birthday with a 6-0 7-5 victory over her good friend Kaja Juvan. Swiatek, who sent down 24 winners, celebrated by collecting a bouquet of flowers before being serenaded on court.

“She (Juvan) didn’t give me any birthday gifts, so I’m really happy I could win,” Swiatek said in her on-court interview.

Is it all Greek to you? Coronavirus variants get new names

Our View: It may have lost a seat, but Disy has reason to be satisfied