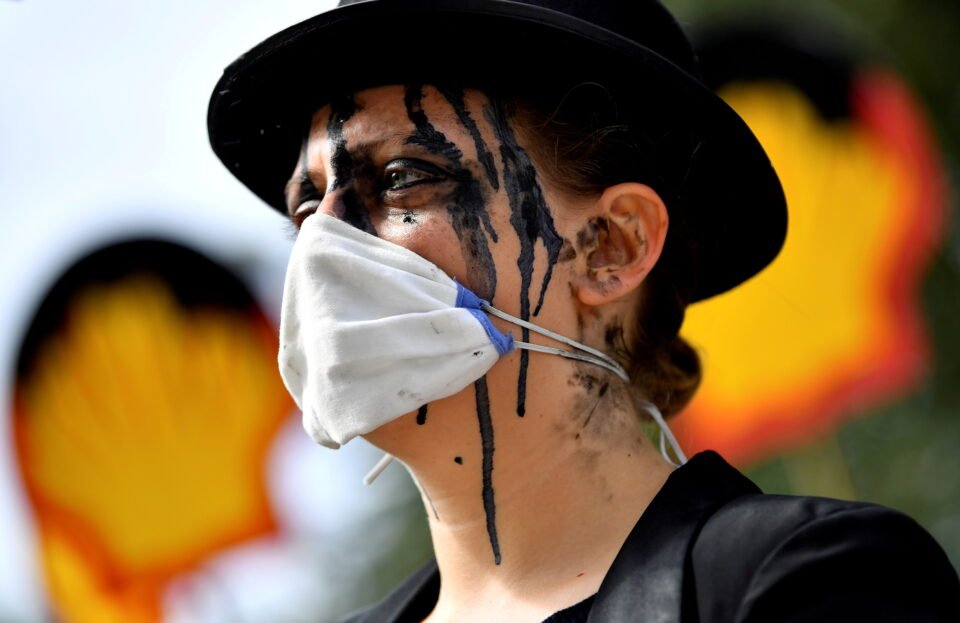 A climate activist wearing a face mask takes part in a protest outside the Shell building in London, Britain
“I see a huge and growing gap between the rhetoric and the reality,” said Fatih Birol, head of the International Energy Agency, two weeks ago, but he despaired a bit too soon. Last Wednesday a Dutch court ruled that Royal Dutch Shell, one of the world’s biggest oil companies, must cut its global carbon dioxide emissions by 45 per cent by 2030.
Judge Larisa Alwin’s ruling in the Hague district court was “not so much a shot across the bow as a direct hit to the hull of Big Oil,” said Mark Lewis, chief sustainability strategist at BNP Parisbas Asset Management. “No amount of patching up the hole will do. Shareholders and society want the vessel completely overhauled.”
The Dutch court said that Shell’s declared plan for reducing its carbon emissions was vague, inadequate and non-binding, and ordered it to cut its total emissions by almost half in the next nine and a half years. That includes the emissions from all the oil and gas Shell sells, not just its own operational emissions.
The judge based her decision on the fact that Shell is violating Dutch law and the European Convention on Human Rights that guarantee the ‘right to life’. The company is recklessly making emissions that endanger human life by causing global heating.
She linked her verdict directly to the Paris Climate Agreement of 2015, which clearly states that keeping the increase in average global temperature below 1.5°C requires 45 per cent emissions cuts by 2030.
Shell’s vague promise to make 20 per cent cuts by then simply didn’t meet the requirement, she said, and its non-binding promises of bigger cuts between 2030 and 2050 would come too late to matter. (The World Meteorological Organisation said last week that there is a 40 per cent chance of the world temporarily crossing the +1.5°C threshold at least once in the next five years.)
It was Friends of the Earth (and 17,000 co-plaintiffs) that brought the case in the Hague, but other activists are planning similar cases in half a dozen other countries. Even faster moving, perhaps, are the shareholder revolts that are forcing oil companies to take their emissions seriously.
Again it was Shell that took the first hit. The Dutch activist group ‘Follow This’ has been coordinating shareholders rebellions at Shell’s annual general meetings since 2016, when it only got 2.8 per cent support for a resolution calling on the company to cut CO2 emissions. This month it got 30 per cent of the votes, including those of some big institutional investors.
Follow This also got 20 per cent of shareholders’ votes at British Petroleum’s AGM on Wednesday for a similar resolution, and although both companies rejected the resolutions they are required to report back to the investors on why they did so.
On the same day the US oil giant ExxonMobil was forced to accept the election of two pro-climate activists on its 12-person board (the vote was organised by the small environmentalist hedge fund ‘Engine No. 1’).  And ‘Follow This’ got a 61 per cent majority for a resolution at Chevron’s Thursday AGM forcing the company to reduce its carbon emissions.
It was always going to be nip and tuck. The time needed to persuade the climate doubters and mobilise the apathetic was always going to leave very little time for actually getting emissions down before we hit tipping points and lose control of the outcome entirely.
At the moment, we can still control the outcome because it’s our own emissions that are causing the problems. Once the natural feedbacks kick in – and that’s what the recommended +1.5°C limit and the absolute +2°C limit are meant to prevent – we would have no recourses left except adapting to the disaster and/or geoengineering.
That’s where the urgency comes from, so it’s a relief that things are finally starting to move in the right direction.  What happens in the courtrooms and the boardrooms provides none of the adrenalin rush of an Extinction Rebellion demo, but it is at least as important as what happens in the streets.
If the law and the great corporations are not committed to cutting greenhouse gas emissions, we are probably not going to meet our deadlines. We have only ten years left to cut our emissions by half, and even those who want to change the global economic model must recognise that it cannot be changed that fast.
‘Saving the planet’ – more correctly, saving ourselves – cannot be done without the collaboration of the banks (no more loans for high-carbon energy projects), the insurance companies (no more cover for those projects) and investors (no more license for short-termist managers who don’t care if the assets end up stranded so long as they can cash in their stock options first).
In the end, every revolution worth making requires the ‘long march through the institutions.’
previous post

Erdogan: ‘We must reduce interest rates;’ Turkish lira at 10.50 to euro