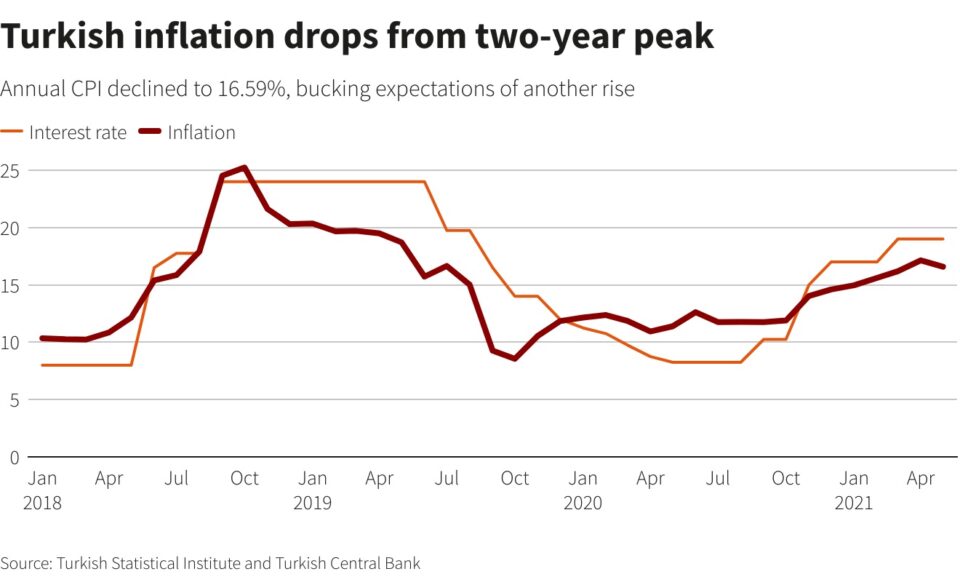 Slight drop in inflation rate in May does not alter lira decline.

Turkey’s inflation rate fell from a two-year high to 16.59 per cent year-on-year in May, data showed on Thursday, bucking market expectations for another rise thanks largely to limited price increases during a full lockdown in the first half of the month.

Inflation had quickened to 17.14 per cent in April, the highest since mid-2019, due to the lira’s sharp fall after President Tayyip Erdogan sacked a hawkish central bank governor in March.

The currency weakened further in May, raising expectations of higher inflation due to imports priced in hard currencies. The median estimate in a Reuters poll for annual inflation was 17.25 per cent.

Turkey was under lockdown in the first half of May aimed at slowing the spread of new Covid-19 cases. Economists said a ban on the sale of some items during the lockdown curbed price rises but that hikes would be implemented in June.

“The limited price rises in groups other than food due to reduced demand because of the lockdown had a large impact on the drop in annual inflation,” said Haluk Burumcekci, of Burumcekci Consulting.

The rise in clothing prices was far below last year’s level, he said.

The producer price index rose 3.92 per cent month-on-month in May, the data showed, for an annual rise of 38.33%. That is expected to contribute to headline inflation in coming months, as the input costs are reflected on consumer prices.

The central bank had said inflation would peak in April, and Governor Sahap Kavcioglu told investors on Wednesday that inflation would enter a significant downward trend at the end of the third quarter or the beginning of the fourth.

Erdogan’s frequent calls for rate cuts and his sacking of three central bank governors in less than two years has seriously eroded the bank’s credibility.

Erdogan said this week that he spoke to Kavcioglu and urged him to cut rates in the next two months, sending the lira tumbling to a record low against the dollar on Wednesday.

But Kavcioglu sought to ease concerns of premature easing during Wednesday’s meeting with investors, saying they were “unjustified”.

Jason Tuvey, senior emerging markets economist at Capital Economics, said the central bank has in the past begun easing policy once inflation passed its peak.

“We think that the CBRT will heed President Erdogan’s recent calls for monetary easing by August,” he said in a note. “And as inflation drops sharply towards the end of the year, aggressive interest rate cuts seem likely.”