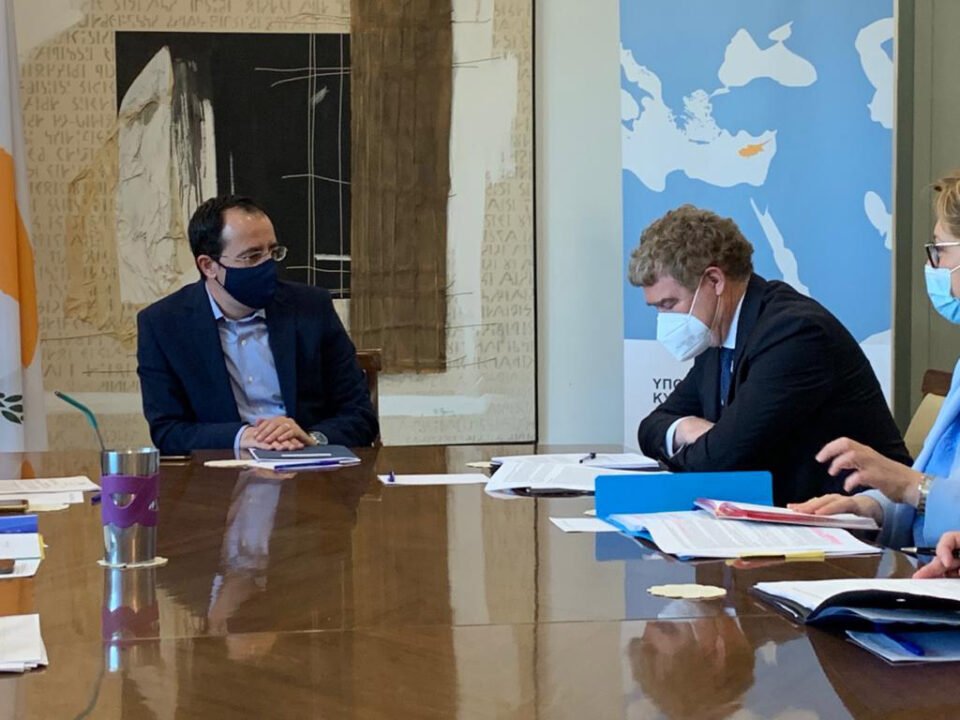 The UN Secretary-General’s special envoy Jane Holl Lute is expected to arrive on the island within June for consultations ahead of another five-party summit on the Cyprus problem, Foreign Minister Nikos Christodoulides said on Friday.

The minister told state broadcaster Cybc the government was in consultations with Lute to set the date of her next visit to Cyprus.

According to Christodoulides, in her new round of contacts, Lute will go into substantive issues concerning the six chapters of the Cyprus problem; governance and power sharing, EU matters, property, territory, economy, and security and guarantees.

Lute has already had contacts with officials of guarantors Greece, Turkey, and the UK.

The UN official has launched a new round of contacts after all parties agreed to give it another go after no progress was achieved at the informal five-party summit on the Cyprus problem held last April in Geneva. It was announced that another one would take place soon but no date was set.

“The five-party must take place the soonest possible, but there must be good preparation,” Christodoulides said.

The minister, though acknowledging that “things are not easy” with the Turkish side promoting another form of solution than the agreed federal one, said the Greek Cypriot side was carrying on the effort.

Christodoulides said a series of meetings taking place within the next few weeks could be defining as regards the Cyprus problem.

On Friday, he said, the EU Director General for Structural Reform Support, Mario Nava, was in Cyprus for contacts. He said this was “a very important visit at this stage” since it also concerns issues of the EU financial regulation on the Turkish Cypriot community.

“It is a tool given by the EU to the Turkish Cypriot community with the aim of reaching a settlement to the Cyprus problem based on the agreed framework,” Christodoulides said. “The continuation of promotion by Turkey and Turkish Cypriots of another form of solution affects this data,” said, adding that there is strong interest by the EU on this issue.

The EU official tweeted after the meeting with the minister that he had “a fruitful exchange” on the island’s reunification based on UN Security Council resolutions. “Also discussed several issues from #EU agenda in relation to #Cyprus,” he added.

The foreign ministry said Nava and Christodoulides had an “open and productive discussion” on the important work undertaken by the EU reforms in Cyprus, particularly on work aimed at facilitating reunification of Cyprus through implementation of relevant EU regulations.

Christodoulides said he also had a scheduled telephone conversation later on Friday with US Undersecretary of State for Political Affairs, Victoria Nuland, on her request. He said the Cyprus problem was expected to be the main topic of the discussion.

The minister also expressed the belief that the week of the Nato summit, to be held in Brussels on June 14, was important as regards the Cyprus problem as Turkish President Recep Tayyip Erdogan was scheduled to meet with the Greek prime minister and the US president. He added that these meetings would take place 10 days before the European Council where the EU leaders will discuss the bloc’s relations with Turkey.

The results of these meetings will be defining for what’s to follow, he added.

Christodoulides also said diplomatic consultations were underway for the arrangement of a meeting between President Nicos Anastasiades and US President Joe Biden after the latter mentioned the possibility in his letter this week.

On what can be expected from Erdogan’s visit in the north on July 20 and the messages he had announced would be sending to the world, Christodoulides said he did not rule out anything when it comes to the Turkish president. “Everything is possible,” he said.