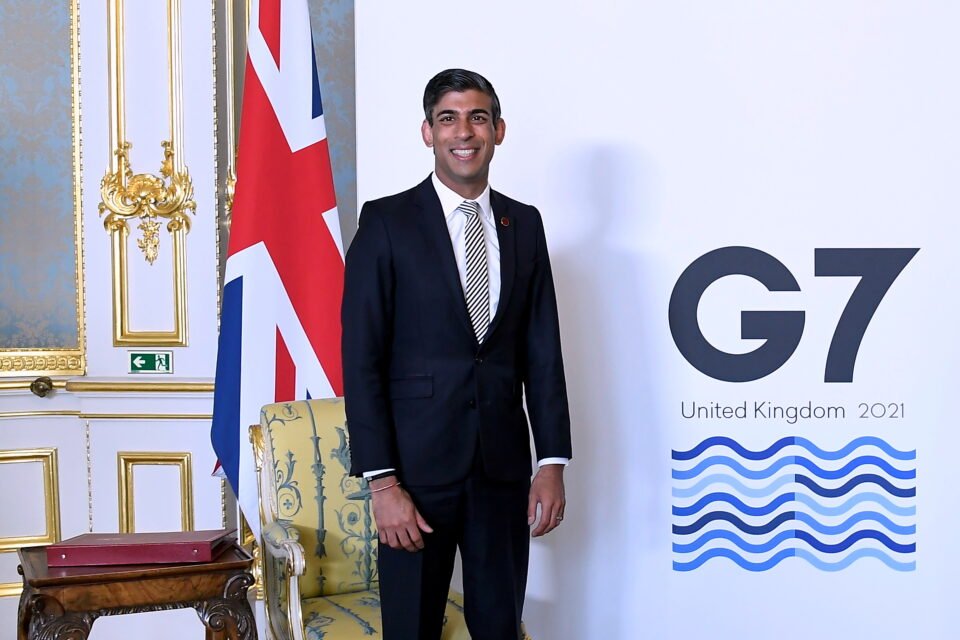 Britain's Chancellor of the Exchequer Rishi Sunak at the G7

By David Milliken and Kate Holton

The United States, Britain and other leading nations reached a landmark deal on Saturday to pursue higher global taxation on multinational businesses such as Google, Facebook, Apple and Amazon.

In a move that could raise hundreds of billions of dollars to help governments cope with the aftermath of Covid-19, the Group of Seven (G7) large advanced economies agreed to back a minimum global corporate tax rate of at least 15 per cent.

The deal would have an impact on Cyprus which, like Ireland, has a corporate tax rate of 12.5 per cent.

Companies will also have to pay more tax in the countries where they make sales.

The meeting, hosted at an ornate 19th-century mansion near Buckingham Palace in central London, was the first time finance ministers have met face-to-face since the start of the pandemic.

US Treasury Secretary Janet Yellen said the “significant, unprecedented commitment” would end what she called a race to the bottom on global taxation.

German finance minister Olaf Scholz said the deal was “bad news for tax havens around the world”, adding: “Companies will no longer be in a position to dodge their tax obligations by booking their profits in the lowest-tax countries.”

Rich nations have struggled for years to agree a way to raise more revenue from large multinationals, which can pay little tax on the billions of dollars of sales they make in countries around the world, draining public finances.

US President Joe Biden’s administration gave the stalled talks fresh impetus, however, by proposing a minimum global corporation tax rate of 15 per cent to deter companies from booking profits elsewhere.

The 15 per cent is above the level in countries such as Ireland but below the lowest level in the G7. Amazon and Google welcomed the agreement and Facebook said it would likely pay more tax.

But some campaign groups condemned what they saw as a lack of ambition.

The deal, years in the making, also promises to end national digital services taxes levied by Britain and other European countries which the United States said unfairly targeted US technology giants.

But the measures will first need to find broader support at a meeting of the G20 – which includes a number of emerging economies – due to take place next month in Venice.

“It’s complicated and this is a first step,” Sunak said.

Exactly which big companies will be covered, and how governments divide up tax revenue, is still to be agreed.

Germany, France and Italy welcomed the tax agreement, although French Finance Minister Bruno Le Maire said he would fight for a higher global minimum corporate tax rate than 15 per cent, which he described as a “starting point”.

Campaign groups such as international development charity Oxfam also said the minimum tax rate should be much higher. “They are setting the bar so low that companies can just step over it,” Oxfam’s head of inequality policy, Max Lawson, said.

But Irish finance minister Paschal Donohoe, whose country is potentially affected because of its 12.5 per cent tax rate, said any global deal also needed to take account of smaller nations.

Sunak said the deal was a “huge prize” for taxpayers, but it was too soon to know how much money it would raise for Britain.

The agreement does not make clear exactly which businesses will be covered by the rules, referring only to “the largest and most profitable multinational enterprises”.

Some European countries have feared that a business such as Amazon could slip through the net as it reports lower profit margins than most other well-known technology companies.

Ministers also agreed to move towards making companies declare their environmental impact in a more standard way so investors can decided more easily whether to fund them, a key goal for Britain.

Coronavirus: Children over six must have negative test to cross north