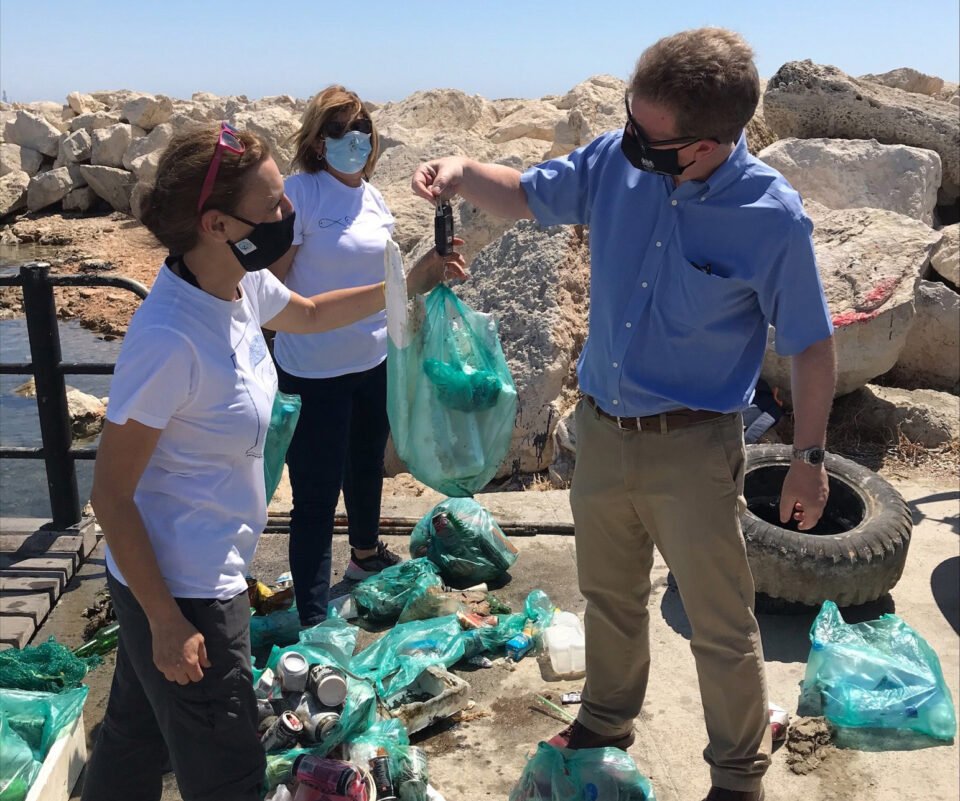 Divers on Monday collected more 103 kilos of rubbish from the seabed in the Psarolimano area of Larnaca, including glass and plastic bottles, cans and two tyres.

The clean-up was organised by Akti Project and Research Centre in cooperation with the British High Commission, Larnaca municipality, the Fisheries Department, professional and volunteer divers and the association of professional fishermen to mark World Ocean Day which is marked annually on June 7.

High Commissioner Steven Lillie, who boarded a boat participating in the clean-up, highlighted the importance of tackling marine pollution, adding that it was significant that island-countries such as Cyprus and the UK work together to achieve this. The UK has made protection of the oceans part of its actions on climate change with the aim of ensuring that 30 per cent of the oceans are protected by 2030, he added.

Akti president Xenia Loizidou warned that our seas have become “soups of plastic”, endangering marine ecosystems. “Akti works with the fishermen of Cyprus, we are in the same struggle to keep our seas clean from rubbish and from plastic,” she said.

She thanked participants who had collected 103 kilos of rubbish trapped in the Psarolimano and Makenzie reefs.

The rubbish that is collected depends on the timing of the clean-up because of the currents. “Today we collected 100 kilos. We may come tomorrow, and it will be crystal clean or the day after we may collect half a ton. Because the sea currents in Larnaca shift in this way we cannot have an exact picture if there is an increase in rubbish,” she added.

But what is clear that there is more rubbish from beachgoers, for example a lot of cans, which means that Cypriots are polluting. “The coasts of Cyprus are large rubbish tips. We have to admit this and do something about it.”

Akti volunteers had found rubbish from plastic and glass, while 80 per cent was from aluminum. Divers had also brought to the surface two car tyres, items which are found on the seabed in many places in Cyprus as they are thrown into the sea to create habitats for octopi.