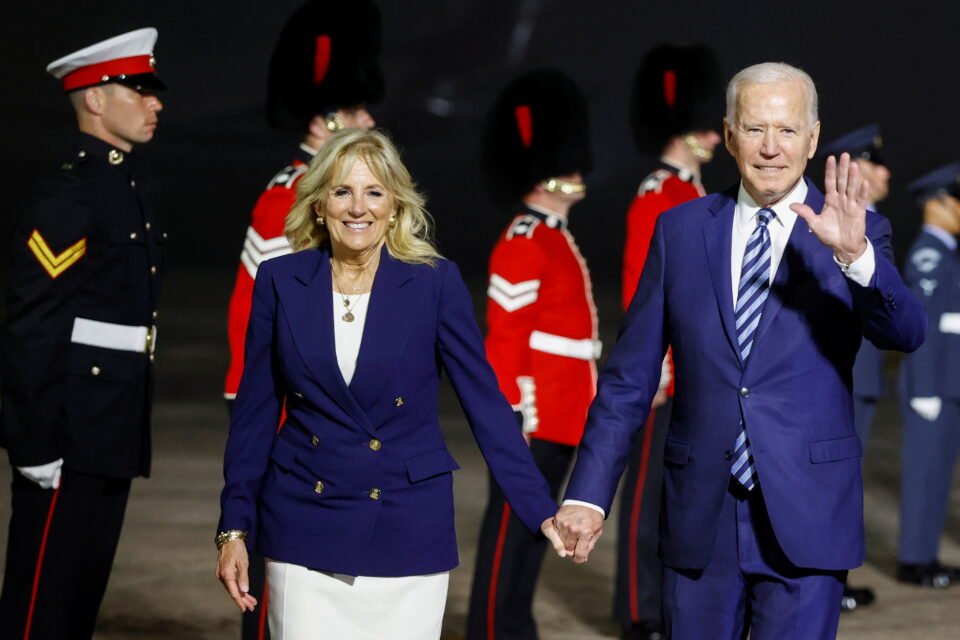 President Joe Biden began his first trip abroad since taking office by hailing America’s unwavering commitment to the NATO alliance and warning Russia it faced “robust and meaningful” consequences if it engaged in harmful activities.

Biden, speaking to about 1,000 troops and their families at a British air base, said he would deliver a clear message to Russian President Vladimir Putin when they meet next week after separate summits with NATO, G7 and European leaders.

“We’re not seeking conflict with Russia,” the Democratic president said at the start of his eight-day visit to Europe. “We want a stable and predictable relationship … but I’ve been clear: The United States will respond in a robust and meaningful way if the Russian government engages in harmful activities.”

Biden has said he is determined to rebuild trans-Atlantic ties and reframe relations with Russia after four rocky years under Republican former President Donald Trump, whose tariffs and withdrawal from treaties strained relations with major allies.

“This is my first overseas trip as president of the United States. I’m heading to the G7, then the NATO ministerial and then to meet with Mr. Putin to let him know what I want him to know,” Biden said, drawing cheers from the troops.

“At every point along the way, we’re going to make it clear that the United States is back and democracies of the world are standing together to tackle the toughest challenges, and the issues that matter most to our future.”

Biden told reporters as he left for Europe that his goals were “strengthening the alliance, making it clear to Putin and to China that Europe and the United States are tight.”

His summit with Putin on June 16 in Geneva is the capstone of the trip, an opportunity to raise U.S. concerns directly with the Russian leader about ransomware attacks emanating from Russia, Moscow’s aggression against Ukraine and a host of other issues.

Speaking to U.S. troops based at Royal Air Force Mildenhall base, a huge American flag behind him, Biden underscored the U.S. commitment to the NATO alliance but said it needed to modernize and expand its cyber capabilities.

Biden also comes to Europe with a goodwill gesture, the planned announcement that the United States will buy and donate 500 million Pfizer Inc/BioNTech coronavirus vaccine doses to about 100 countries over the next two years, three sources familiar with the matter told Reuters.

Biden is expected to announce the deal on Thursday. The United States has faced criticism over securing access to much of the initial stockpile of the most promising vaccines.

Biden made his first stop of the trip at the seaside village of St. Ives in Cornwall where he will participate in the G7 summit. The meeting is expected to be dominated by vaccine diplomacy, trade, climate and an initiative for rebuilding infrastructure in the developing world. U.S. officials see that effort as a way to counter China’s growing influence.

His push for a global minimum tax on multinational corporations faces opposition at home. G7 finance ministers agreed before the summit to pursue a global minimum tax rate of at least 15% and to allow market countries to tax up to 20% of the excess profits – above a 10% margin – generated by about 100 large, high-profit companies.

Republicans came out against the plan this week, potentially complicating the U.S. ability to implement a broader global agreement.

Biden will have a meeting with British Prime Minister Boris Johnson on Thursday in Cornwall, a chance to renew the U.S.-British “special relationship” after Britain’s Brexit break from the European Union. The two countries will issue an updated joint statement of principles between the two countries in honor of the original Atlantic Charter from 1941.

But the two have deep policy issues to discuss, with Biden set to reinforce stalwart U.S. support for the 1998 Good Friday peace agreement that ended decades of bloodshed in Northern Ireland, according to White House national security adviser Jake Sullivan.

“President Biden has been crystal clear about his rock-solid belief in the Good Friday Agreement as the foundation for peaceful co-existence in Northern Ireland,” White House national security adviser Jake Sullivan told reporters aboard Air Force One.

“Any steps that imperil it or undermine it would not be welcomed by the United States,” said Sullivan, who declined to characterise Johnson’s actions as imperiling the peace.

Such is Biden’s concern over Northern Ireland that Yael Lempert, the top U.S. diplomat in Britain, issued London with a demarche – a formal diplomatic reprimand – for “inflaming” tensions, the Times newspaper reported.

The agreement has come into question with the United Kingdom’s exit from the European Union.

Biden and Johnson will also discuss climate change, a proposal to counter China’s global influence on infrastructure and the withdrawal of Western troops from Afghanistan.

The Russian Nord Stream 2 pipeline will also be on the agenda when Biden meets with German officials. The Biden administration opposes the $11 billion natural gas pipeline, but Germany wants it finished.

After three days of G7 summitry, Biden and his wife, Jill, will visit Queen Elizabeth at Windsor Castle. The 78-year-old Biden met the queen back in 1982 when he was a U.S. senator from Delaware.

Biden then travels to Brussels for talks with leaders of NATO and the European Union. The agenda is expected to be dominated by Russia, Turkey, China and the perennial issue of getting NATO allies to contribute more to the common defense.

Biden and Erdogan will meet to discuss Syria, Afghanistan and other regional issues next week and will also discuss the “significant differences” between Washington and Ankara in their first face-to-face meeting since Biden took office, the U.S. national security adviser said on Monday.

NATO allies Ankara and Washington have been at odds over a host of issues, from Turkey‘s purchase of Russian S-400 missile defence systems – a move that drew U.S. sanctions last year – to regional policy differences, human rights, and legal matters.

Biden closes out the trip in Geneva for what could prove to be the most difficult meeting of the trip – a session with Putin, who enjoyed friendly relations with Trump.

No major breakthroughs are expected from the summit.

Asked by reporters if his meeting with Putin would yield some accord on cybersecurity, Biden was non-committal.

“Who knows?” said Biden. “It’s going to be a subject of our discussion.”