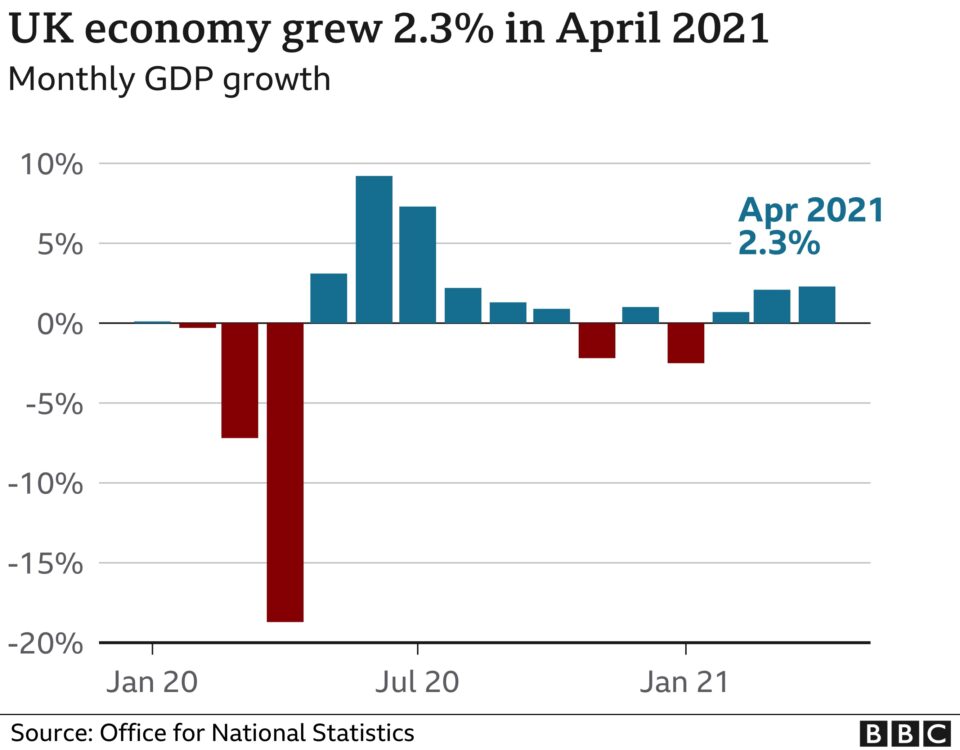 Britain’s recovery from the Covid-19 pandemic sped up in April as lockdown measures eased, with the fastest monthly growth since July leaving output a record 27.6 per cent higher than a year earlier, when the virus was rampant and lockdown tightest.

It comes, however, after output had plunged by almost 10 per cent, the biggest drop in more than 300 years. Exports and construction are still in a slump.

The figures on Friday from the Office for National Statistics (ONS) showed rapid growth in the services sector as non-essential retail and hospitality businesses opened their doors after months of closure and schools fully restarted.

Economic output rose by 2.3 per cent month-on-month in April, marking the fastest growth since July, the ONS said, and slightly above the Reuters poll consensus for a 2.2 per cent increase.

“The jump in GDP in April was another sign that consumers are raring to spend as the economy reopens,” said Thomas Pugh, UK economist at consultancy Capital Economics.

However, British economic output remained 3.7 per cent below its level in February 2020, before the pandemic led to lockdown measures, the ONS said.

But with the Delta variant of Covid-19 first detected in India spreading fast, Johnson has said the lifting of lockdown could be delayed.

April’s growth came despite an unexpected 1.3 per cent drop in industrial output, reflecting widespread maintenance of oil rigs and a shortage of computer chips for car manufacturers.

Output in the services sector jumped by 3.4 per cent in monthly terms in April – above all forecasts in the Reuters poll that pointed to growth of 2.8 per cent.

Construction output fell unexpectedly by 2.0 per cent in April – although the ONS said this followed a hefty 5.8 per cent jump in March.

“Today’s figures are a promising sign that our economy is beginning to recover,” finance minister Rishi Sunak said.

Last month the Bank of England raised its forecast for British economic growth in 2021 to 7.25 per cent from February’s estimate of 5.0 per cent.

That would be the fastest annual growth since 1941 when Britain was rearming during World War Two. But it comes after output plunged by almost 10 per cent, the biggest drop in more than 300 years.

Trade with the EU continues to be hurt by friction from new post-Brexit trade restrictions, though by less than at the start of the year.

Compared with three years ago – the last time trade was unaffected by either Covid or fears of an imminent disruptive Brexit – British goods exports to the EU this April were 7.1 per cent lower and imports from the EU were 15.3 per cent lower.

Exports to the EU were also below their average for 2019.

“That is a disappointing performance, given the boom in global trade flows; UK exporters have lost market share,” Samuel Tombs of Pantheon Macroeconomics said.