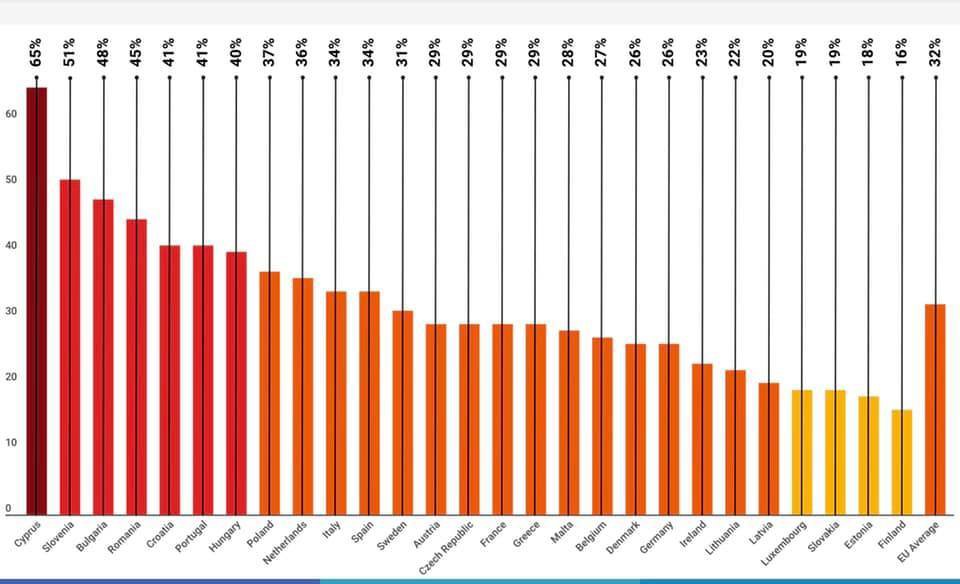 Cyprus was the EU top country whose citizens believe corruption has increased over the past year according to Transparency International’s Global Corruption Barometer.

On top of that, the poll found that four out of ten Cypriots used personal connections to access a public service over the past year.

“While bribery rates remain low at seven per cent, we found that around three in ten people [across the EU] used a personal connection to access health care, education and other public services,” Transparency said. This was equivalent to more than 106 million people across the bloc.

Health care is reportedly a hotspot for corruption, which Transparency said was of particular concern during the pandemic when citizens urgently need medical support and vaccinations. Although just 6 per cent of people paid a bribe for health care, 29 per cent of EU residents have used personal connections to receive medical attention, the survey found.

“During a health crisis, using personal connections to access public services can be as damaging as paying bribes,” said Delia Ferreira Rubio, Chair of Transparency International

“Lives can be lost when connected people get a Covid-19 vaccine or medical treatment before those with more urgent needs. It’s crucial that governments across the EU redouble their efforts to ensure a fair and equitable recovery from the ongoing pandemic,” she added.

Overall, almost two thirds of people in the EU think that government corruption is a problem in their country and a further 44 per cent think it’s not getting any better. The report said this was made worse by widespread perceptions of impunity, with only 21 per cent of people believing that officials often face appropriate penalties for corruption.

It said that citizens were divided about which institutions had the biggest corruption problems. In half of EU countries, prime ministers and members of parliament are seen as the most corrupt. In the other half, it is business executives and bankers.

Yet trust in the police, local governments and the courts is high across the region. More than 60 per cent of EU residents reported trusting these institutions.

The report also said that people in the EU increasingly scrutinise the cosy relationship between business and government.

“When it is unclear what ties policymakers have to the business community, there is a risk that policies and regulations are made in favour of narrow private interests, rather than the common good,” it said.

“We found that less than a third of people (30 per cent) think their government takes their views into account when making decisions.”

Around half of EU citizens think that bribes or connections are commonly used by businesses to secure profitable government contracts and that big companies often avoid paying their taxes.