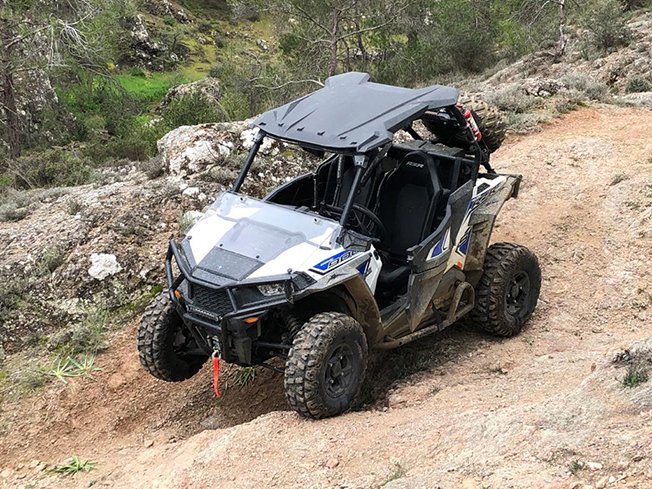 So, you’ve got some savings and you fancy something that’ll be fun at the weekend. You’ve already got a car and your partner thinks motorbikes are too dangerous.

Your options? Well, if you live in Cyprus, you may be drawn to a jet ski. The thing is, while they may seem hilarious fun during short rentals, in the real world they can be a lot of hassle – the engine needs a freshwater flush after each ride, reliability on some models is poor, and it can be tricky manoeuvring the trailer carrying it in and out of the water. It’s enough work that unless it’s a perfect day and you’ve got a totally flat sea, it’s just not worth the hassle.

But what if there was something that could provide similar thrills with half the hassle? The Polaris RZR 900 is a road legal, off-road buggy. A little oxymoronic, I know, but in reality it just means you can drive to wherever the fun is at, saving you the trailer hassle that comes with owning a jet ski. It’ll set you back about €20.000, which isn’t cheap, but then again this isn’t your average rental machine.

On the day of my test, the first order of business was to drive to some tracks behind Foinikaria. I’ll be honest – it’s not a refined road experience. There’s a lot of tyre roar, you’re utterly exposed to the elements and the CVT transmission means that the engine uses lots of revs, even at low speed.

In other words, while it has number plates and a top speed of 100km/h, it is never going to be a substitute for a car. Find a beaten track, however, and everything starts to make sense.

With no prior experience driving a proper buggy, it took me some time to get used to how capable the RZR 900 is. If you come into this, as I did, carrying the kind of sensibilities you would employ driving a car, you’re going to have to rewire your brain. Numerous times the owner pointed at a hill or gulley that my road-born intuition told me was unsurpassable.

On other occasions, I was encouraged to drive faster, even when my rattled behind was telling me that any more abuse over such a rocky surface would surely explode the suspension. They’re quite amazing these things.

Admittedly, it’s not for everyone. The experience is intense – you’re shaken about, clinging on the steering wheel to the extent that your forearms ache afterwards. What’s more with McLaren Senna-esque ‘half-there’ doors you’re in prime position to get a good soaking should you encounter some wetter sections of track. ‘It’s all part of the fun’, said the owner, gleefully showing me a picture of himself covered head to toe in mud.

The engine only makes 75hp, but because of the variable transmission there is always bountiful torque on tap. There are more powerful buggies even in the RZR range, but on the narrow tracks around Cyprus it would be unnecessary. This has all you need to power up any track – no matter how rocky, or, if you’re feeling like a hooligan, stick it in 2WD mode and have some drifty-fun on a flatter, wider path.

Unfortunately, I can’t tell you how this stacks up against its rivals, because, well, I have not driven them, but I can tell you that as an experience, a buggy of this calibre is utterly unique. There might be those that think there’s no point looking into such a thing because they already own an SUV.

I believe there are two underlying misunderstandings that could lead to this. Firstly, thanks to its low weight and short overhangs, this can do things that no car could dream of. Secondly, its narrow width means that, regardless of terrain, this buggy can go places that cars can’t – bringing me neatly to my final point: Perhaps even more impressive than the buggy itself is the terrain that we, living in Cyprus, have access to. Thousands of beaten and gravel trails, often winding, long, well-cleared and able to consistently serve up jaw-dropping views.

We weaved through the hills for hours, never retracing tracks and travelling at quite a pace, yet I am told this was this was just a small sample of mountain paths in Limassol alone. The owner assures me that similar trails are to be found island-wide. No wonder we have a history hosting stages of the World Rally Championships.

The Polaris RZR 900 is, to be polite, an expensive toy. But if you’re a petrolhead and you aren’t lusting after one of these, I’d assert that it is almost certainly because you have not yet been made aware of what they can do.

It’s acquired fun, but if you have the money to spend €20,000 on something like this, I’d urge you to at least find a way to give one a go. Moving forward, given the 900cc motor found in this Polaris is hardly the star of the show – more a noisy facilitator, these will be even better when they eventually go electric, allowing you to enjoy environmentally friendly and pandemic-proof fun.

Mickelson aims to seal career grand slam at US Open