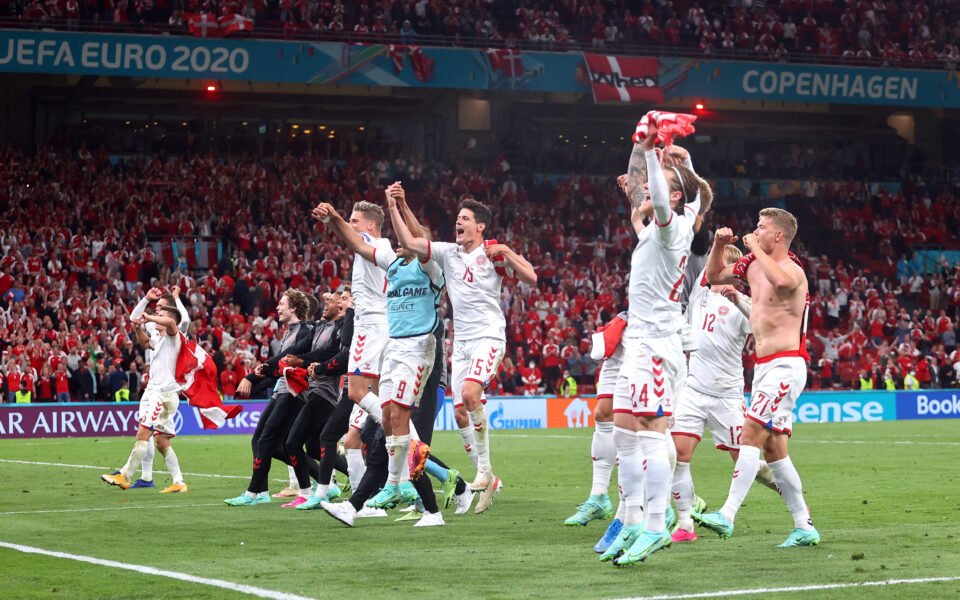 Despair turned to exhilaration for Denmark as they claimed an astonishing 4-1 victory over Russia to scramble into the last 16 of Euro 2020 on a head-spinning night in Copenhagen on Monday.

Nine days after Denmark‘s talisman Christian Eriksen needed life-saving treatment after suffering a cardiac arrest in front of a stunned Parken Stadium crowd, his team mates duly delivered on their promise to “do it for Christian”.

Needing victory to have any chance of making progress after losing to Finland and Belgium, it was Eriksen’s replacement Mikkel Damsgaard who lit the touchpaper with a 38th-minute wonder goal, the first act on a night of high drama.

When a dreadful mistake by Russia’s Roman Zobnin allowed Yussuf Poulsen to double the lead on the hour, it looked as though fate was smiling kindly on Denmark.

It was not that simple as even a win would not have been sufficient had Finland avoided defeat by Belgium, a match bizarrely being played in St Petersburg.

The script took a dark turn when Russia’s giant striker Artem Dzyuba converted a penalty at almost the exact moment a Belgium opening goal was being disallowed by VAR.

But everything turned out alright in the end as Andreas Christensen’s screamer and Joakim Maehle’s late effort completed the demolition of Russia and Belgium beat Finland 2-0.

The stadium erupted and beer filled the air at the final whistle as Denmark remained alive and kicking in a tournament which just over a week ago looked trivial following Eriksen’s brush with death.

Denmark, Finland and Russia all finished Group B on three points, behind Belgium, but the Danes edged through on goal difference and can now look forward to taking on Wales in Amsterdam while Russia are going home.

They are the first team in the history of the Euros to reach the knockout stage after losing their first two games but it took a while for the message to get through to Denmark‘s players, who huddled together in the centre circle around a phone for confirmation of Belgium’s win over the Finns.

“It’s so insane that we’ve gone through. This team, these players. It’s great to be a part of it,” said Damsgaard, the 20-year-old who has stepped into Eriksen’s boots.

“I have never dreamed of being a part of something so big, so it’s a great feeling.”

Other than a Pierre-Emile Hojbjerg shot that fizzed wide early on, Denmark were struggling to make much headway against a disciplined Russia side for whom Alexander Golovin could have opened the scoring after a weaving run.

With no margin for error, there was a tension about Denmark‘s play and Russia had briefly turned down the noise being generated by the 23,000-strong crowd resembling a solid red wall.

“It’s the first time I’ve seen support like this,” Russia keeper Matvei Safonov said. “One of their players just completes a pass and the whole stadium is on their feet.”

They were in ecstasy in the 38th minute when Damsgaard produced a moment of magic Eriksen would be proud of.

Receiving a pass from Hojbjerg, he took a silky touch with his left foot and opened his body to swerve a majestic right-foot shot beyond Russia keeper Matvei Safonov.

If Denmark‘s opener was sublime, their second on the hour mark was ridiculous. Zobnin inexplicably played a pass back towards his keeper without looking and Poulsen completed the simplest of tasks to score.

Denmark were rampant, but everything went flat as Russia were awarded a penalty after Jannik Vestergaard fouled Alexander Sobolev — and giant striker Dzyuba thumped the ball past Kasper Schmeichel to revive their hopes.

The mood in the stadium became jubilant as news filtered through that Belgium had finally taken the lead and Denmark rode the red wave to finish with a flourish.

Christensen latched on to a clearance to smash an unstoppable shot past Safonov from 25 metres before Maehle fired home his side’s fourth to make absolutely sure of a reaching the knockout phase for the first time since 2004.

Belgium outclassed Finland 2-0 on Monday to continue their perfect start to Euro 2020 and finish top of Group B, leaving the Finns facing a nervous wait to see if they can sneak into the last 16.

A much-changed Belgium side dominated the game but only found a breakthrough in the 74th minute courtesy of an own goal from keeper Lukas Hradecky, who fumbled a Thomas Vermaelen header over the line after it had crashed off the woodwork.

Striker Romelu Lukaku clinched the victory in the 83rd minute by swivelling to thump home a Kevin de Bruyne pass and score his third goal of the tournament.

Belgium, who became the third team after Italy and the Netherlands to win all three group games, will face one of the third-placed sides in Seville on June 27.

Denmark, second in Group B after their 4-1 win over Russia on Monday, will play Wales in Amsterdam on June 26.

Finland, who came third with three points, must wait until the end of the group stage to see if their adventure in a first ever major tournament will continue and they need a series of results to go their way if they are to make the last 16.

“It was a tough game today. We knew that Finland would play very compact and would be difficult to break down. But from the moment we scored, we knew they had to come out and it was more open,” Belgium midfielder De Bruyne said.

Finland keeper Hradecky was proud of his side’s showing in the three games but not confident about their prospects of going through.

“The third place doesn’t comfort us at this moment,” he said.

“We have come a long way together. The guys have blocked dozens, if not hundreds, of shots, and I’ve caught some. We win as a team and we lose as a team. The journey continues. We will be coming back. Finland belongs in the major tournaments.”

Belgium coach Roberto Martinez made changes from the side that beat Denmark 2-1 but his was still a line-up bursting with world-class talent as Eden Hazard and De Bruyne made their first starts of the tournament.

Teenager Jeremy Doku was their liveliest threat and created the only real moment of danger before halftime when he drifted in from the left wing and aimed a shot towards the bottom corner but Hradecky made a fine save.

Finland defended resolutely but did not have a real chance of their own until after the hour mark when Glen Kamara fired straight at Thibaut Courtois.

Hazard was denied by a big save from Hradecky and Belgium thought they had taken the lead when Lukaku controlled a threaded pass from De Bruyne and celebrated the goal before a lengthy VAR review ruled him fractionally offside.

Finland finally cracked under the pressure when Hradecky turned the ball over the line after Vermaelen’s thumping header from a corner struck the post.

Lukaku then used a combination of skill and power to seal the victory and continue his prolific start to the tournament, joining Portugal’s Cristiano Ronaldo, Czech Republic’s Patrik Schick and the Netherlands’ Georginio Wijnaldum on three goals.