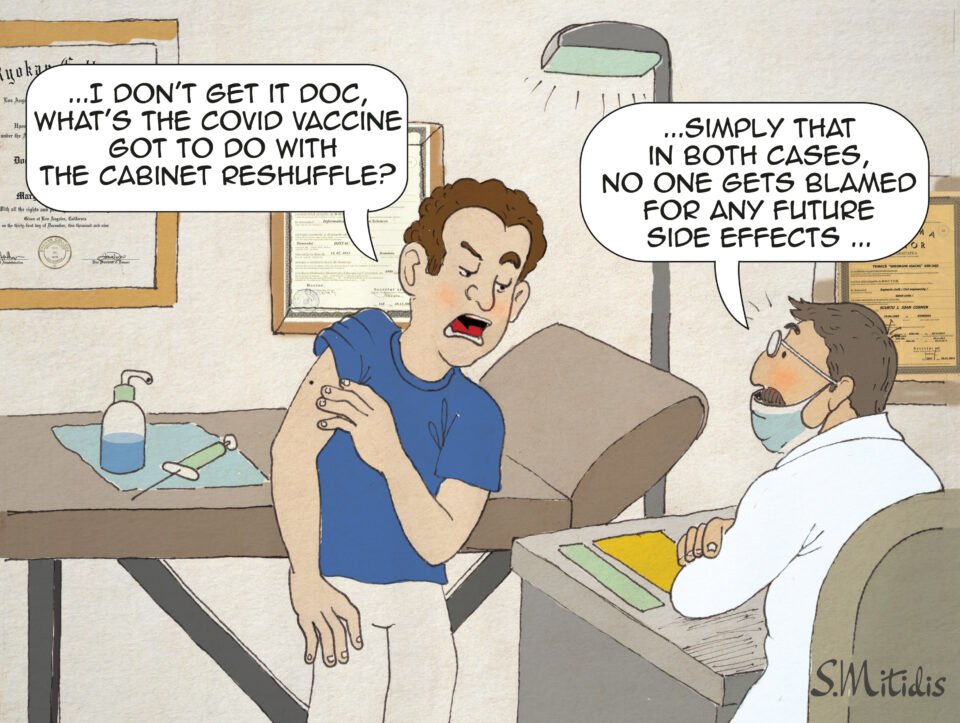 The prophets of doom and the Project Fear salesmen, who had mercifully disappeared from view for about a month, made a comeback in the last week, doing their best to re-establish the fear of Covid in people.

The Covidian ruling clique were busy upping the scaremongering, with horror stories about clusters and the Indian variant that could cause a fourth or fifth wave in the summer because we have become complacent, and the irresponsible young were not getting vaccinated with the risk of infecting their parents, vulnerable grandparents, great grandmothers, great grandfathers and pets.

But if the grandparents and other old people have been vaccinated with both doses, is there a risk of them being infected by the virus? According to what we have been told – we were urged to get vaccinated so as to be safe – the answer must be ‘no’, so why are Covidian sages getting their knickers in a twist over the unvaccinated young and adding emotional blackmail to their alarmist messaging?

It was only a little over a week ago that the government was boasting that we were the second or third country in the EU in vaccination coverage. And suddenly the Covid sages have decided we are at great risk, upped the scaremongering and urging everyone to get the jab.

OUTGOING health minister Constantinos Ioannou launched the latest Project Fear during a visit to Famagusta general hospital on Tuesday, expressing concerns about the doubling of the positivity rate and the reluctance of the young to get the jab.

A little later the health ministry issued an announcement informing us that 90 per cent of hospitalised cases were unvaccinated and only a quarter of the 18-21 age group had had the jab. It is panic stations all over again, the policy of not giving data about cases scrapped in order to advance the vaccination cause.

Leading Covid sage, Professor Karayiannis, who relishes publicity as much as Odysseas, was back with a vengeance, declaring the increase in cases was “shocking” and that “the virus is once again showing us its teeth,” like a shark. His guess was that the rise in the number of cases was attributable to the Delta variant and he advocated “stricter border controls and more testing at airports to avoid disaster”. His advice is unlikely to have gone down well with the hoteliers.

Even Professor Kostrikkis, who left the scientific advisory team and the glare of publicity some time ago, felt duty-bound to crush our spirits, warning about a fourth wave in September. Karayiannis, the leading professor of doom was even more pessimistic, saying it could start from now “in the middle of the summer season”, if we do not get vaccinated. How about another lockdown to be on the safe side?

THE REASON we have not heard much from the members of the scientific dream team in the last few weeks is because they have not been meeting to discuss the epidemiological data and give the government their wise advice.

Apparently, these professional scaremongers became scared of the legal suits they face for advising lockdowns and other restrictions. They have now set the condition that they are granted legal immunity to continue meeting and offering their expert advice, like insisting we carry on wearing face masks outdoors.

PREZ NIK’S eagerly awaited (by those who have no life) cabinet reshuffle was announced on Tuesday and it was nothing of the sort. He appointed new people to two ministerial posts after the resignation of the respective ministers and changed his spokesmen who are the only people he reshuffles.

Gone was KK and his assistant Panayiotis Sentonas, who was rewarded for being a failure as deputy government spokesman by being appointed Commissioner of the Citizen (a sinecure for Disy losers, formerly known as Commission of Volunteerism). Nik has been through quite a few spokesmen – the only members of his government he actually sacks – presumably because they all mysteriously fail to cultivate a positive public image of the president.

Only the silver-tongued Paphite ever succeeded in this mission and lasted in the post for three years before becoming foreign minister. The new spokesman is a Marios Pelekanos, who is reportedly on the Elam wing of Disy. Stephie Drakou, from the moderate wing of Disy, replaced Emily Yiolitis (no match on the style icon stakes) while questions surround the new health minister Michalis Hadjipantelas, an accountant.

“Why appoint a guy nobody, but nobody has ever heard of,” I asked a customer of our establishment. “He is the only one that accepted,” was the reply.

ODYSSEAS, the untouchable-general, issued a 15-page diatribe in response to the references made to him in the final report of the investigative committee looking into the citizenship scheme within 24 hours of its publication.

There was a bit in the committee’s report that in effect said the morally flawless Odysseas had been economical with the truth in his testimony to the committee, regarding an audit carried into the discretionary granting of citizenships at the interior ministry by a member of his office in 2016. The audit officer found a host of irregularities which she listed in her report, but no action was taken, nor was her report made public.

Asked, during his appearance before the investigative committee, whether he knew about the 2016 audit by his office of the interior ministry, Odysseas said he had been informed “much later, it must have been in 2019 when [then Interior Minister] Mr Hasikos called me.”

Yet the investigative committee found a note sent to Odysseas by an audit office official in December 2016, informing him that an administrative audit regarding citizenships had been carried out at the interior ministry. Giving testimony before the committee last December, the late Socratis Hasikos said that while the audit was taking place at the interior ministry in 2016, he spoke to Odysseas a about it, demanding that the audit office issue a report.

Odysseas’ memory must have let him down because he could not possibly have lied to the committee.

HOW THINGS have changed. It was not that long ago, when our banks were urging you to take loans for holidays abroad and to go on shopping sprees. They just stopped short of using paid muscle for dragging you into a branch off the street to force you to take a loan for something you did not need, without ever bothering to check whether you had the ability to repay it.

Now, if you ask for a loan, the banker looks at you with pity as if you are unhinged and in desperate need of psychiatric help for making such an unreasonable request. The banks are sitting on a lot of cash that they don’t want to lend, which is why they have now begun charging corporate customers for cash deposits. Negative interest has not been charged to individuals yet, but it is only a matter of time – they just charge you for everything you do.

And because they have no interest in giving loans nowadays, they treat customers with disdain, making out they are doing you a favour when they serve you. And when you are on the receiving end of some arbitrary decision that causes you endless inconvenience you are lucky to get an explanation other than ‘it is bank policy’.

ONE OF our customers, who owns a small business, related his experience with bank that defied belief. One day, out of the blue he was informed that his account had been blocked.

He eventually found out that the lawyer of his landlord, with whom he had a dispute over the level of rent he was paying (no issue of non-payment of rent), had written to the bank informing it that he had submitted an application to the court for a winding up order.

‘So, whenever you are informed by a lawyer of a payment dispute you block the account of a business so it cannot carry on working?’ our customer asked his branch manager. ‘This is the instruction we received from our legal department’ was the curt reply. The business was not insolvent, it had no bad debts, but the bank’s decision meant its customer would have no access to money to pay wages or its bills. It was bank policy he was told.

‘You can still make deposits in the frozen account,’ he was helpfully told by the bank manager, with no intention of mockery. The customer has had to go to the courts to obtain the necessary paperwork in the hope the bank’s legal department would be magnanimous enough to unblock his account.

A PASSENGER on a Lufthansa flight to Frankfurt a few weeks ago felt she was reliving the glory days of Cyprus Airways, the state-owned national carrier that went bust because it was run by the incompetent placemen of the political parties.

On the flight, was our foreign minister Nicos Christodoulides who had a business class seat and three of his minions in economy, all heading to Tallinn in Estonia. As would happen with Cyprus Airways flights, the minions took turns to visit the business class section to butter up the minister, completely ignoring the Covid rules against moving in the aircraft.

The strange thing was that the normally strict Lufthansa stewardesses allowed the foreign ministry employees to flout Covid safety measures. And things only got worse, because while the plane was on its descent to Frankfurt, Christodoulides used his Paphite charm with a stewardess to allow his entourage to move to the front of the plane so they could get off first and not miss their connecting flight.

At a time when everyone had to be strapped in their seat for landing, the ministry men were opening the overhead lockers to take their luggage and move to the front of the plane. Credit to Christodoulides whose airline diplomacy imposed the Cyprus Airways ‘no rules ethos’ on Lufthansa.

THE PAPHITE charmer on Wednesday unveiled another aspect of his multi-faceted, multi-dimensional foreign policy – the promotion of pourekia and kolokasi abroad. The diplomatic community was invited to the ‘Taste of Cyprus’ event at which Christodoulides and agriculture minister Costas Kadis presented local products that would be registered as PDOs.

The foreign ministry’s objective was to promote Cypriot traditional products, including Paphos sausage with pepper, to third countries, said the Paphos diplomat, who highlighted the importance of gastronomy for visitors to Kyproulla. There were no plans however to launch gastronomic diplomacy at present.

FORMER House president and ex-leader of Edek, Yiannakis Omirou, has found a niche for himself in his retirement – writing tributes to dead leaders.

He has penned countless newspaper articles about the greatness of Makarios, but on Wednesday he expanded his repertoire with a hagiographical piece on Andreas Papandreou, to mark 25 years since the death of the socialist demagogue.

Papandreou may have bankrupted his country, leaving a legacy of colossal debts to future generations, but Omirou insisted that “for Hellenism he is the inspired, radical leader of post-dictatorship Greece.”

Our View: Unrelenting Covid doom and gloom must end