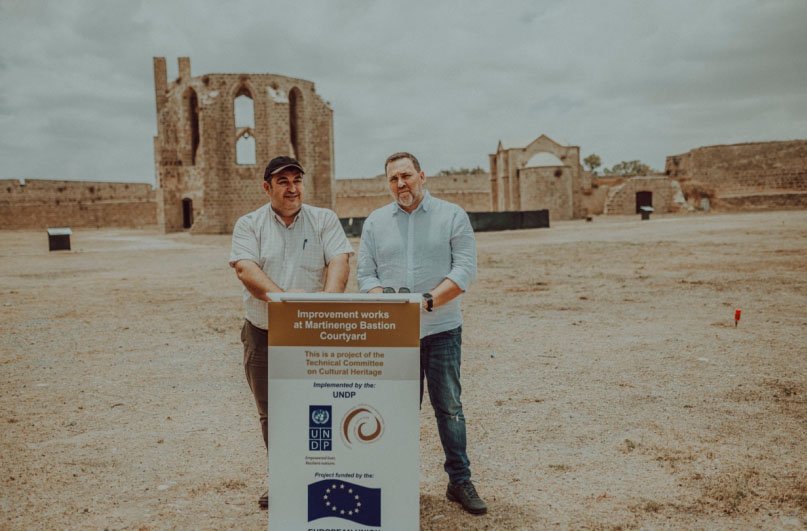 The city walls of old Famagusta and the ancient site of Salamis are ‘pearls of the Mediterranean’ which the bicommunal cultural heritage committee is determined to preserve, the group said on Monday.

“Monuments in Salamis and Famagusta symbolise the richness and diversity of our island’s cultural heritage. Protection of cultural heritage is a fundamental basis on which intercultural dialogue and cooperation can be established,” said Ali Tuncay, co-chair of the Technical Committee on Cultural Heritage (TCCH) during a tour of the area to see the works in progress.

“As the Technical Committee on Cultural Heritage, we are dedicated to preserving this rich cultural heritage for future generations and as well as humanity.

“Salamis archaeological site and the historic walled city of Famagusta are both pearls of the Mediterranean.

Members of the TCCH and Jakhongir Khaydarov the new head of UNDP, which is implementing the EU-funded renovations works, toured the Kampanopetra and the Agios Epiphanios basilicas in Salamis as well as the opus sectile floor of the Saint Barnabas basilica in the area.

The group then visited improvement works at the Martinengo bastion courtyard of Famagusta’s city walls, where a team of experts composed of archaeologists and conservators, made up of both Greek Cypriots and Turkish Cypriots, are beginning the third phase of conservation works to structurally support, and physically protect the monument.

“The beginning of conservation works at the Salamis archaeological site and the courtyard of the Martinengo Bastion are the fruits of a very successful partnership between the Technical Committee on Cultural Heritage, UNDP and the European Union,” Khaydarov said.

“Monuments and sites preserved and restored through this partnership are able to return to having a powerful role in building bridges between people.”

The other co-chair of the TCCH, Takis Hadjidemetriou, said that, with the completion of the works in the surrounding area, the Martinego Bastion will be accessible to visitors.

Since 2012, 88 cultural heritage sites island-wide have been conserved, structurally supported, physically protected or restored by TCCH and UNDP, with funding from the EU.

Approximately €22.4 million have been provided by the European Commission to implement the priorities of the Technical Committee on Cultural Heritage for the preservation of the island-wide cultural heritage in Cyprus.

First Aid basics: how to perform CPR on an adult