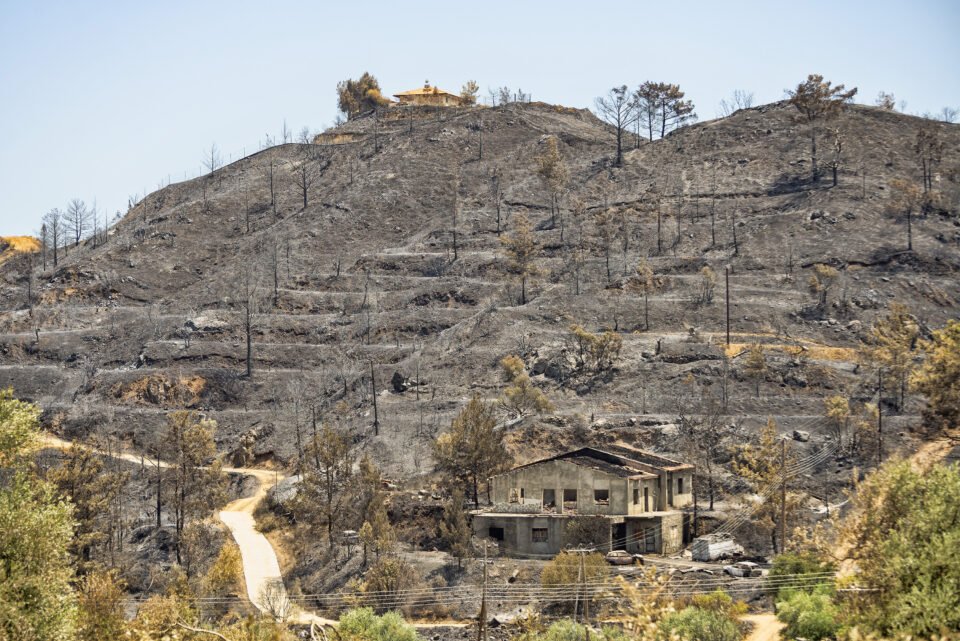 The fire broke out in the Arakapas area early on Saturday afternoon and could not be put under control until Monday morning, by which time it had killed four people, burnt through 55 sq km of forest, scrub and farmland and spread panic and destruction to ten villages (CNA)

With the smoke barely gone from the biggest wildfire in recent memory – and the tragic deaths of Morzok, Hisa, Ezat and Maged – it is perhaps hard to take the step back and think in a clear way about long-term fire prevention and management in Cyprus. We have to though. The ugly climate change reality is that disastrous fire events are set to become more and more likely on our island, and we need to become much better prepared for this new norm.

The fire broke out in the Arakapas area of Limassol early on Saturday afternoon and could not be put under control until Monday morning, by which time it had killed four unlucky farm workers, burnt through 55 square km of forest, scrub and farmland and spread panic and no small measure of destruction to ten villages. The fire-fighting response was huge, but the bigger question has to be whether we are doing all we can to make our countryside as fire proof as possible. Climate change models predict rising average temperatures, lower rainfall and more heat waves and droughts for Cyprus in the years to come. This is a pattern that is already evident and which creates a ‘perfect storm’ for wildfires. So unless we adapt to this new, harsh reality, we can expect more burn events.

The first – and perhaps obvious – point to make is that fire has always been part of the natural system in Cyprus. The oft expressed lamest that a fire is ‘the destruction of nature’ is not strictly speaking true. Dominating our natural ecosystems are plants that are adept at ‘bouncing back’ after a fire.  Native bushes and trees such as the Rock rose, Lentisc, Carob, Terebinth and Calabrian Pine have ‘been there and done it before’, recovering from root or seed.

The natural recovery takes time, of course, but I was impressed, in the hours after the fire, to hear Agriculture Minister Costas Kadis on the radio talking about ‘letting nature do her job’. Kadis spoke of the natural recovery capacity of Mediterranean systems adapted to fire, with intervention best limited to where it is really needed, and to assist this natural process. The opposite of the old interventionist approach seen in areas such as the Paphos Forest after the massive 1974 fires. Bulldozers went in to terrace mountainsides and a dense pine tree monoculture was planted – an invitation for more fires.

Take the road that drops down from the Karvounas crossroads past Kato Amiandos to Saittas in the Troodos Mountains, look to your left and you will see just how well natural regeneration can work. The mountainside – burnt in June 2007 – is now clothed in green, with bigger bushes and some trees beginning to come in.  The key to good natural recovery arguably lies in protecting the soil after the fire, preventing soil erosion through targeted gulley-blocking on slopes and avoiding the churning up of the earth with heavy machinery.

OK, so fire is not ‘the end’ and our ecosystems can recover, but it would be perverse to suggest uncontrolled burns are in any way good for the countryside or the people who live there. And there is another key point here: we simply no longer live in normal ecological times. People start most forest fires and these are therefore far more frequent than they would be in a world less dominated by (often shockingly irresponsible) humans. And then there is global warming. We simply cannot afford the extra greenhouse gas load pumped into the atmosphere by forest fires. The forest will slowly recover, but, with our atmosphere already over-laden with CO2, the CO2 released by a wildfire is simply not re-absorbed fast enough to help the climate emergency. (It is for the same reason, by the way, that burning wood or wood pellets as fuel is not a sustainable choice for today’s world, and is anything but the ‘green’ solution it is often touted to be).

So we have to render our countryside as fire-proof as possible, while also investing in ensuring we are primed for swift, effective fire-fighting response when fire comes. But the onus must be on fire-proofing, and I outline some relevant ideas below.

Fire-proofing point one is ‘break it up’. In recent decades, the abandonment of marginal farmland and the reduction of numbers of roaming flocks of sheep and goats have led to our countryside being far more thickly clothed in scrub and trees. Good to have more perennial vegetation cover, yes, but this also means there is far more flammable material out there for a fire to feed on. To change this, government policy needs to support, effectively, the maintenance and return of sustainable, low-intensity farming and grazing. It is not hard to do so through suitable designed agri-environment-climate schemes to support farmers and shepherds.

The rejuvenation of farming and grazing will act to break up the vegetation cover and reduce the buildup of dead plant material on the ground, helping halt the spread of fire. Bare hillsides and ploughed monocultures we don’t want, but a mosaic landscape with small fields and grazed areas along with natural vegetation is both sustainably productive and more fire resistant than continuous cover of forest or scrub. It also makes for an attractive landscape, an added bonus. The Department of Forests prefers fire breaks, which also help fire trucks get to the flames, but the fire breaks also increase access for pyromaniacs and other no-do-gooders. They also cause erosion and are a bit of a landscape scar, though I am not suggesting there is no place for well-planned firebreaks in the fire-proofing mix.

Point two is avoid forestry monocultures, which are an invitation for conflagration. Luckily, the wall-to-wall pine trees approach is not something the forestry department is any longer a fan of.

Point three is keep isolated housing out of our countryside. If you look at the data, the prevalence of isolated housing as a starting point for fires is striking. Isolated housing also has a big landscape impact and a significant ecological impact (mostly related to disturbance of wildlife). So government policy needs to discourage this very poor planning choice.

Point four is blindingly obvious: ban outright the lighting of fires in the countryside. It is still legal to burn off crop stubbles and weeds (kapsalisma, as it is called). There are conditions attached but they are plainly not tight enough. Kapsalisma is another main cause of wildfires. So let’s ban it, full stop. And while we are about it, let’s make the penalties for those convicted of starting a fire truly deterrent. A life sentence for anyone deliberately causing such destruction seems about right.

After all the above is put in place, actually while it is being put in place, we need to build on existing fire-fighting systems. Invest serious cash in fire-battling helicopters and aircraft, and serious effort in enhancing coordination systems between relevant departments and with neighbouring countries. Train teams of willing volunteers and of course invest in fire education.

The new wildlfires norm is upon us, we need to get ready for it.

Martin Hellicar is the director of local nature conservation NGO BirdLife Cyprus. A PhD ecologist and former journalist, he is fortunate enough to work for an organisation whose positions closely match his, though the opinions expressed here are entirely his own

Our View: Greek Cypriot side is on its own over Varosha